“Prediabetes”: Are There Problems With This Label? No, We Need Heightened Awareness of This Condition! 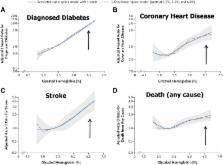 The category of “prediabetes” defined by the American Diabetes Association comprises a range of intermediate hyperglycemia based on fasting or 2-h postload glucose or on HbA 1c. Over the recent past, the “cut points” identifying this stage have changed, i.e., a lower fasting glucose level is used. On one hand, it can be argued that the change to a lower cut point identifies a group of individuals still at higher risk and provides heightened awareness for a condition associated with higher risk for cardiovascular disease. In addition, identification of individuals at this stage may represent a chance of earlier intervention in the disease. However, the argument against this definition of prediabetes is that it disguises the differences in the three subcategories and creates problems in interpreting observations on interventions and outcomes. In addition, it can be argued that the enormous numbers of people identified with the criteria far exceeds the capacity of health care systems to respond through individual care, particularly without evidence that interventions benefit any category other than impaired glucose tolerance. Thus, there does not appear to be consensus on the definition using the cut points identified. Controversy also remains as to whether there are glycemic metrics beyond HbA 1c that can be used in addition to HbA 1c to help assess risk of an individual developing diabetes complications. Given the current controversy, a Point-Counterpoint debate on this issue is provided herein. In the preceding point narrative, Dr. Yudkin provides his argument that there are significant problems with this label. In the counterpoint narrative below, Dr. Cefalu argues that the cut points are appropriate and do provide useful and important information in trying to reduce the future burden of diabetes.

Contributions of beta-cell dysfunction and insulin resistance to the pathogenesis of impaired glucose tolerance and impaired fasting glucose.

Incidence of Type 2 diabetes in England and its association with baseline impaired fasting glucose: the Ely study 1990-2000.

N Forouhi,  J. Luan,  S Hennings … (2007)
To determine the incidence of Type 2 diabetes and to examine the effect of different cut-points for impaired fasting glucose (IFG) on diabetes incidence. Population-based longitudinal study (1990-2000) with clinical, anthropometric and biochemical measurements, including an oral glucose tolerance test (OGTT), in 1040 non-diabetic adults aged 40-69 years at baseline. Baseline glucose status was defined as normoglycaemia < 5.6, IFG-lower 5.6-6.0 and IFG-original 6.1-6.9 mmol/l. The all-IFG group included fasting glucose values of 5.6-6.9 mmol/l. The 10-year cumulative incidence of diabetes was 7.3 per 1000 person-years. Diabetes incidence was 2.4 [95% confidence interval (CI) 1.2, 4.8], 6.2 (4.0, 9.8) and 17.5 (12.5, 24.5) per 1000 person-years in those with normoglycaemia, IFG-lower and IFG-original, respectively. Compared with normoglycaemia, the age/sex-adjusted risk [hazard ratio (HR) and 95% CI] for incident diabetes was greatest in the IFG-original category (HR 6.9; 3.1, 15.2) and increased to a lesser degree in the IFG-lower (HR 2.5; 1.1, 5.7) and all-IFG categories (HR 4.1; 1.9, 8.7). When adjusted for confounding factors, the magnitude and direction of associations persisted, with HR 1.9, 4.4 and 2.9, for the categories IFG-lower, IFG-original and all-IFG, respectively. Diabetes incidence is more strongly related to IFG defined as fasting glucose between 6.1 and 6.9 mmol/l than to the lower category of 5.6-6.0 mmol/l, or entire range of 5.6-6.9 mmol/l. Future studies should examine the association of IFG with cardiovascular outcomes, but for diabetes risk our study supports the use of the IFG cut-point at 6.1 mmol/l.