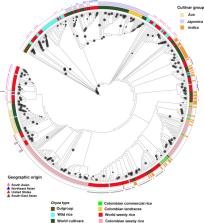 Weedy rice ( Oryza spp.) is a worldwide weed of domesticated rice ( O. sativa), considered particularly problematic due to its strong competition with the crop, which leads to reduction in yields and harvest quality. Several studies have established multiple independent origins for weedy rice populations in the United States and various parts of Asia; however, the origins of weedy rice in South America have not been examined in a global context. We evaluated the genetic variation of weedy rice populations in Colombia, as well as the contributions of local wild Oryza species, local cultivated varieties, and exotic Oryza groups to the weed, using polymorphism generated by genotyping by sequencing (GBS). We found no evidence for genomic contributions from local wild Oryza species ( O. glumaepatula, O. grandiglumis, O. latifolia, and O. alta) to Colombian weedy rice. Instead, Colombian weedy rice has evolved from local indica cultivars and has also likely been inadvertently imported as an exotic pest from the United States. Additionally, weeds comprising de novo admixture between these distinct weedy populations now represent a large proportion of genomic backgrounds in Colombian weedy rice. Our results underscore the impressive ability of weedy rice to evolve through multiple evolutionary pathways, including in situ de‐domestication, range expansion, and hybridization.

What is a population? An empirical evaluation of some genetic methods for identifying the number of gene pools and their degree of connectivity.

Robin S Waples,  Oscar E Gaggiotti (2006)
We review commonly used population definitions under both the ecological paradigm (which emphasizes demographic cohesion) and the evolutionary paradigm (which emphasizes reproductive cohesion) and find that none are truly operational. We suggest several quantitative criteria that might be used to determine when groups of individuals are different enough to be considered 'populations'. Units for these criteria are migration rate (m) for the ecological paradigm and migrants per generation (Nm) for the evolutionary paradigm. These criteria are then evaluated by applying analytical methods to simulated genetic data for a finite island model. Under the standard parameter set that includes L = 20 High mutation (microsatellite-like) loci and samples of S = 50 individuals from each of n = 4 subpopulations, power to detect departures from panmixia was very high ( approximately 100%; P < 0.001) even with high gene flow (Nm = 25). A new method, comparing the number of correct population assignments with the random expectation, performed as well as a multilocus contingency test and warrants further consideration. Use of Low mutation (allozyme-like) markers reduced power more than did halving S or L. Under the standard parameter set, power to detect restricted gene flow below a certain level X (H(0): Nm < X) can also be high, provided that true Nm < or = 0.5X. Developing the appropriate test criterion, however, requires assumptions about several key parameters that are difficult to estimate in most natural populations. Methods that cluster individuals without using a priori sampling information detected the true number of populations only under conditions of moderate or low gene flow (Nm < or = 5), and power dropped sharply with smaller samples of loci and individuals. A simple algorithm based on a multilocus contingency test of allele frequencies in pairs of samples has high power to detect the true number of populations even with Nm = 25 but requires more rigorous statistical evaluation. The ecological paradigm remains challenging for evaluations using genetic markers, because the transition from demographic dependence to independence occurs in a region of high migration where genetic methods have relatively little power. Some recent theoretical developments and continued advances in computational power provide hope that this situation may change in the future.

The Rc and Rd genes are involved in proanthocyanidin synthesis in rice pericarp.

I Kijima-Suda,  T. Furukawa,  Koh-ichi Kadowaki … (2006)
Different colors, such as purple, brown, red and white, occur in the pericarp of rice. Here, two genes affecting proanthocyanidin synthesis in red- and brown-colored rice were elucidated. Genetic segregation analysis suggested that the Rd and A loci are identical, and both encode dihydroflavonol-4-reductase (DFR). The introduction of the DFR gene into an Rcrd mutant resulted in red-colored rice, which was brown in the original mutant, demonstrating that the Rd locus encodes the DFR protein. Accumulation of proanthocyanidins was observed in the transformants by the introduction of the Rd gene into the rice Rcrd line. Protein blot analysis showed that the DFR gene was translated in seeds with alternative translation initiation. A search for the Rc gene, which encodes a transacting regulatory factor, was conducted using available DNA markers and the Rice Genome Automated Annotation System program. Three candidate genes were identified and cloned from a rice RcRd line and subsequently introduced into a rice rcrd line. Brown-colored seeds were obtained from transgenic plants by the introduction of a gene containing the basic helix-loop-helix (bHLH) motif, demonstrating that the Rc gene encodes a bHLH protein. Comparison of the Rc locus among rice accessions showed that a 14-bp deletion occurred only in the rc locus.