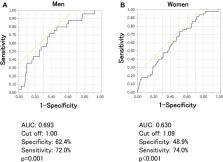 Sarcopenia is prevalent in patients with chronic kidney disease (CKD). The indices of physical function, such as grip power and gait speed, decreased according to the decline in the estimated glomerular filtration rate (eGFR).

We examined the relationships between cystatin C-based GFR (eGFRcys), creatinine-based GFR (eGFRcre), their ratio (eGFRcys/eGFRcre) and sarcopenia in community-dwelling older adults in Japan. This cross-sectional study included 302 men aged 73.9 ± 6.2 years and 647 women aged 72.9 ± 5.8 years from a rural area in Hyogo Prefecture, Japan. eGFRcys and eGFRcre were simultaneously measured, and sarcopenia based on the Asia Working Group for Sarcopenia (AWGS) 2019 criteria was evaluated.

In conclusion, CKDcys but not CKDcre is associated with sarcopenia. A lower eGFRcys/eGFRcre ratio may be a practical screening marker of sarcopenia in community-dwelling older adults.

Revised equations for estimated GFR from serum creatinine in Japan.

,  Yasuhiko Tomino,  Seiichi Matsuo … (2009)
Estimation of glomerular filtration rate (GFR) is limited by differences in creatinine generation among ethnicities. Our previously reported GFR-estimating equations for Japanese had limitations because all participants had a GFR less than 90 mL/min/1.73 m2 and serum creatinine was assayed in different laboratories. Diagnostic test study using a prospective cross-sectional design. New equations were developed in 413 participants and validated in 350 participants. All samples were assayed in a central laboratory. Hospitalized Japanese patients in 80 medical centers. Patients had not participated in the previous study. Measured GFR (mGFR) computed from inulin clearance. Estimated GFR (eGFR) by using the modified isotope dilution mass spectrometry (IDMS)-traceable 4-variable Modification of Diet in Renal Disease (MDRD) Study equation using the previous Japanese Society of Nephrology Chronic Kidney Disease Initiative (JSN-CKDI) coefficient of 0.741 (equation 1), the previous JSN-CKDI equation (equation 2), and new equations derived in the development data set: modified MDRD Study using a new Japanese coefficient (equation 3), and a 3-variable Japanese equation (equation 4). Performance of equations was assessed by means of bias (eGFR - mGFR), accuracy (percentage of estimates within 15% or 30% of mGFR), root mean squared error, and correlation coefficient. In the development data set, the new Japanese coefficient was 0.808 (95% confidence interval, 0.728 to 0.829) for the IDMS-MDRD Study equation (equation 3), and the 3-variable Japanese equation (equation 4) was eGFR (mL/min/1.73 m2) = 194 x Serum creatinine(-1.094) x Age(-0.287) x 0.739 (if female). In the validation data set, bias was -1.3 +/- 19.4 versus -5.9 +/- 19.0 mL/min/1.73 m2 (P = 0.002), and accuracy within 30% of mGFR was 73% versus 72% (P = 0.6) for equation 3 versus equation 1 and -2.1 +/- 19.0 versus -7.9 +/- 18.7 mL/min/1.73 m(2) (P < 0.001) and 75% versus 73% (P = 0.06) for equation 4 versus equation 2 (P = 0.06), respectively. Most study participants had chronic kidney disease, and some may have had changing GFRs. The new Japanese coefficient for the modified IDMS-MDRD Study equation and the new Japanese equation are more accurate for the Japanese population than the previously reported equations.

Influence of muscle mass and physical activity on serum and urinary creatinine and serum cystatin C.

Viviane Menon,  A. Ahmed,  Ita Heilberg … (2008)
For addressing the influence of muscle mass on serum and urinary creatinine and serum cystatin C, body composition was assessed by skinfold thickness measurement and bioelectrical impedance analyses. A total of 170 healthy individuals (92 women, 78 men) were classified as sedentary or with mild or moderate/intense physical activity. Blood, 24-h urine samples, and 24-h food recall were obtained from all individuals. Serum and urinary creatinine correlated significantly with body weight, but the level of correlation with lean mass was even greater. There was no significant correlation between body weight and lean mass with cystatin C. Individuals with moderate/intense physical activity presented significantly lower mean body mass index (23.1 +/- 2.5 versus 25.7 +/- 3.9 kg/m(2)) and higher lean mass (55.3 +/- 10.0 versus 48.5 +/- 10.4%), serum creatinine (1.04 +/- 0.12 versus 0.95 +/- 0.17 mg/dl), urinary creatinine (1437 +/- 471 versus 1231 +/- 430 mg/24 h), protein intake (1.4 +/- 0.6 versus 1.1 +/- 0.6 g/kg per d), and meat intake (0.7 +/- 0.3 versus 0.5 +/- 0.4 g/kg per d) than the sedentary individuals. Conversely, mean serum cystatin did not differ between these two groups. A multivariate analysis of covariance showed that lean mass was significantly related to serum and urinary creatinine but not with cystatin, even after adjustment for protein/meat intake and physical activity. Cystatin C may represent a more adequate alternative to assess renal function in individuals with higher muscle mass when mild kidney impairment is suspected.