Cerebrolysin for functional recovery in patients with acute ischemic stroke: a meta-analysis of randomized controlled trials 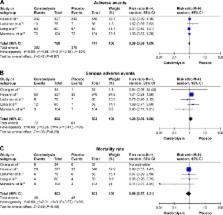 Cerebrolysin has been shown to have an inconsistent efficacy on functional recovery in patients with acute ischemic stroke (AIS). The present meta-analysis aims to evaluate the value of cerebrolysin and to explore the potential influencing factors. The main electronic databases, including MEDLINE, EMBASE, and the Cochrane Library, were searched. The primary outcome was functional recovery at Day 90. The secondary outcomes included mortality and adverse events. A total of 1,649 patients with AIS were pooled from six randomized controlled trials (RCTs). Cerebrolysin had no significant effect on functional recovery at Day 90 compared with the effect of placebo as shown by the modified Rankin Scale response (relative risk [RR] 1.33, 95% confidence interval [CI] 0.79–2.24, P=0.28), National Institutes of Health Stroke Scale response (RR 1.03, 95% CI 0.83–1.28, P=0.77), and Barthel Index response (RR 0.95, 95% CI 0.84–1.08, P=0.44). In safety analysis, cerebrolysin did not increase the risk of adverse events (RR 0.98, 95% CI 0.88–1.09, P=0.67), risk of serious adverse events (RR 1.20, 95% CI 0.86–1.66, P=0.29), or the mortality rate (RR 0.86, 95% CI 0.57–1.31, P=0.49). In conclusion, routine administration of cerebrolysin to patients with AIS cannot be supported by the available evidence from RCTs.

Neuroprotection for ischemic stroke: past, present and future.

Stephen D. Ginsberg (2008)
Neuroprotection for ischemic stroke refers to strategies, applied singly or in combination, that antagonize the injurious biochemical and molecular events that eventuate in irreversible ischemic injury. There has been a recent explosion of interest in this field, with over 1000 experimental papers and over 400 clinical articles appearing within the past 6 years. These studies, in turn, are the outgrowth of three decades of investigative work to define the multiple mechanisms and mediators of ischemic brain injury, which constitute potential targets of neuroprotection. Rigorously conducted experimental studies in animal models of brain ischemia provide incontrovertible proof-of-principle that high-grade protection of the ischemic brain is an achievable goal. Nonetheless, many agents have been brought to clinical trial without a sufficiently compelling evidence-based pre-clinical foundation. At this writing, around 160 clinical trials of neuroprotection for ischemic stroke have been initiated. Of the approximately 120 completed trials, two-thirds were smaller early-phase safety-feasibility studies. The remaining one-third were typically larger (>200 subjects) phase II or III trials, but, disappointingly, only fewer than one-half of these administered neuroprotective therapy within the 4-6h therapeutic window within which efficacious neuroprotection is considered to be achievable. This fact alone helps to account for the abundance of "failed" trials. This review presents a close survey of the most extensively evaluated neuroprotective agents and classes and considers both the strengths and weakness of the pre-clinical evidence as well as the results and shortcomings of the clinical trials themselves. Among the agent-classes considered are calcium channel blockers; glutamate antagonists; GABA agonists; antioxidants/radical scavengers; phospholipid precursor; nitric oxide signal-transduction down-regulator; leukocyte inhibitors; hemodilution; and a miscellany of other agents. Among promising ongoing efforts, therapeutic hypothermia, high-dose human albumin therapy, and hyperacute magnesium therapy are considered in detail. The potential of combination therapies is highlighted. Issues of clinical-trial funding, the need for improved translational strategies and clinical-trial design, and "thinking outside the box" are emphasized.

Cerebrolysin enhances neurogenesis in the ischemic brain and improves functional outcome after stroke.

Michael Chopp,  Z. Zhang,  Ling-Li Zhang … (2010)
Cerebrolysin is a peptide preparation mimicking the action of neurotrophic factors and has beneficial effects on neurodegenerative diseases and stroke. The present study investigated the effect of Cerebrolysin on neurogenesis in a rat model of embolic middle cerebral artery occlusion (MCAo). Treatment with Cerebrolysin at doses of 2.5 and 5 ml/kg significantly increased the number of bromodeoxyuridine-positive (BrdU(+)) subventricular zone (SVZ) neural progenitor cells and doublecortin (DCX) immunoreactivity (migrating neuroblasts) in the ipsilateral SVZ and striatal ischemic boundary 28 days after stroke when the treatment was initiated 24 hr after stroke. The treatment also reduced TUNEL(+) cells by ∼50% in the ischemic boundary. However, treatment with Cerebrolysin at a dose of 2.5 ml/kg initiated at 24 and 48 hr did not significantly reduce infarct volume but substantially improved neurological outcomes measured by an array of behavioral tests 21 and 28 days after stroke. Incubation of SVZ neural progenitor cells from ischemic rats with Cerebrolysin dose dependently augmented BrdU(+) cells and increased the number of Tuj1(+) cells (a marker of immature neurons). Blockage of the PI3K/Akt pathway abolished Cerebrolysin-increased BrdU(+) cells. Moreover, Cerebrolysin treatment promoted neural progenitor cell migration. Collectively, these data indicate that Cerebrolysin treatment when initiated 24 and 48 hr after stroke enhances neurogenesis in the ischemic brain and improves functional outcome and that Cerebrolysin-augmented proliferation, differentiation, and migration of adult SVZ neural progenitor cells contribute to Cerebrolysin-induced neurogenesis, which may be related to improvement of neurological outcome. The PI3K/Akt pathway mediates Cerebrolysin-induced progenitor cell proliferation.

Min Wei,  Ronglin Zhang,  Yisheng Cui … (2013)
Cerebrolysin, a mixture of neurotrophic peptides, enhances neurogenesis and improves neurological outcome in experimental neurodegenerative diseases and stroke. The Sonic hedgehog (Shh) signaling pathway stimulates neurogenesis after stroke. The present study tests whether the Shh pathway mediates cerebrolysin-induced neurogenesis and improves neurological outcome after stroke. Rats subjected to embolic stroke were treated with cerebrolysin with or without cyclopamine. Using neural progenitor cells derived from the subventricular zone of the lateral ventricle of adult rats, we found that cerebrolysin significantly increased neural progenitor cells proliferation and their differentiation into neurons and myelinating oligodendrocytes, which were associated with upregulation of Shh and its receptors patched and smoothened. Blockage of the Shh signaling pathway with a pharmacological smoothened inhibitor, cyclopamine, abolished cerebrolysin-induced in vitro neurogenesis and oligodendrogenesis. In the ischemic rats, treatment with cerebrolysin starting 24 hours after stroke significantly increased neural progenitor cell proliferation in the subventricular zone and enhanced neurogenesis, oligodendrogenesis, and axonal remodeling in the peri-infarct area. Moreover, profound neurological function improvements were observed in rats treated with cerebrolysin from week 3 to week 5 after stroke onset compared with vehicle-treated rats. However, in vivo inhibition of the Shh pathway with cyclopamine completely reversed the effects of cerebrolysin on neurorestoration and functional recovery. These results demonstrate that the Shh pathway mediates cerebrolysin-enhanced neurogenesis and white matter remodeling and improves functional recovery in rats after stroke.