The Aromatase–Estrogen System in the Testes of Non-Mammalian Vertebrates 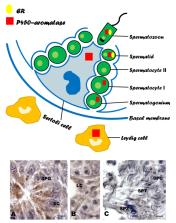 The aromatase–estrogen system plays a key role in gonadal sex differentiation in amphibians, reptiles, and birds during development. In adults of seasonal breeding species, aromatase activity and estrogen levels can act as an “on/off” switch for spermatogenesis and can also promote spermiogenesis.

Estrogens are important physiological regulators of testicular activity in vertebrates. Estrogen levels depend on the activity of P450 aromatase, the enzyme responsible for the irreversible conversion of testosterone into 17β-estradiol. Therefore, P450 aromatase is the key player in the aromatase–estrogen system. The present review offers a comparative overview of P450 aromatase activity in male gonads of amphibians, reptiles, and birds, with a particular emphasis on the functions of the aromatase–estrogen system in these organisms during their developmental and adult stages. The aromatase–estrogen system appears to be crucial for the sex differentiation of gonads in vertebrates. Administration of aromatase inhibitors prior to sexual differentiation of gonads results in the development of males rather than females. In adults, both aromatase and estrogen receptors are expressed in somatic cells, Leydig and Sertoli cells, as well as germ cells, with certain differences among different species. In seasonal breeding species, the aromatase–estrogen system serves as an “on/off” switch for spermatogenesis. In some amphibian and reptilian species, increased estrogen levels in post-reproductive testes are responsible for blocking spermatogenesis, whereas, in some species of birds, estrogens function synergistically with testosterone to promote spermatogenesis. Recent evidence indicates that the production of the aromatase enzyme in excessive amounts reduces the reproductive performance in avian species of commercial interest. The use of aromatase inhibitors to improve fertility has yielded suitable positive results. Therefore, it appears that the role of the aromatase–estrogen system in regulating the testicular activity differs not only among the different classes of vertebrates but also among different species within the same class.

Paul S Cooke,  Manjunatha K. Nanjappa,  CheMyong Ko … (2017)
Estrogens have historically been associated with female reproduction, but work over the last two decades established that estrogens and their main nuclear receptors (ESR1 and ESR2) and G protein-coupled estrogen receptor (GPER) also regulate male reproductive and nonreproductive organs. 17β-Estradiol (E2) is measureable in blood of men and males of other species, but in rete testis fluids, E2 reaches concentrations normally found only in females and in some species nanomolar concentrations of estrone sulfate are found in semen. Aromatase, which converts androgens to estrogens, is expressed in Leydig cells, seminiferous epithelium, and other male organs. Early studies showed E2 binding in numerous male tissues, and ESR1 and ESR2 each show unique distributions and actions in males. Exogenous estrogen treatment produced male reproductive pathologies in laboratory animals and men, especially during development, and studies with transgenic mice with compromised estrogen signaling demonstrated an E2 role in normal male physiology. Efferent ductules and epididymal functions are dependent on estrogen signaling through ESR1, whose loss impaired ion transport and water reabsorption, resulting in abnormal sperm. Loss of ESR1 or aromatase also produces effects on nonreproductive targets such as brain, adipose, skeletal muscle, bone, cardiovascular, and immune tissues. Expression of GPER is extensive in male tracts, suggesting a possible role for E2 signaling through this receptor in male reproduction. Recent evidence also indicates that membrane ESR1 has critical roles in male reproduction. Thus estrogens are important physiological regulators in males, and future studies may reveal additional roles for estrogen signaling in various target tissues.

Estrogen in the adult male reproductive tract: A review

Rex A. Hess (2003)
Testosterone and estrogen are no longer considered male only and female only hormones. Both hormones are important in both sexes. It was known as early as the 1930's that developmental exposure to a high dose of estrogen causes malformation of the male reproductive tract, but the early formative years of reproductive biology as a discipline did not recognize the importance of estrogen in regulating the normal function of the adult male reproductive tract. In the adult testis, estrogen is synthesized by Leydig cells and the germ cells, producing a relatively high concentration in rete testis fluid. Estrogen receptors are present in the testis, efferent ductules and epididymis of most species. However, estrogen receptor-α is reported absent in the testis of a few species, including man. Estrogen receptors are abundant in the efferent ductule epithelium, where their primary function is to regulate the expression of proteins involved in fluid reabsorption. Disruption of the α-receptor, either in the knockout (αERKO) or by treatment with a pure antiestrogen, results in dilution of cauda epididymal sperm, disruption of sperm morphology, inhibition of sodium transport and subsequent water reabsorption, increased secretion of Cl-, and eventual decreased fertility. In addition to this primary regulation of luminal fluid and ion transport, estrogen is also responsible for maintaining a differentiated epithelial morphology. Thus, we conclude that estrogen or its α-receptor is an absolute necessity for fertility in the male.

David Simpson,  Jeffrey B. Jones,  Eric K Robertson … (2001)
Although it has been known for many years that estrogen administration has deleterious effects on male fertility, data from transgenic mice deficient in estrogen receptors or aromatase point to an essential physiological role for estrogen in male fertility. This review summarizes the current knowledge on the localization of estrogen receptors and aromatase in the testis in an effort to understand the likely sites of estrogen action. The review also discusses the many studies that have used models employing the administration of estrogenic substances to show that male fertility is responsive to estrogen, thus providing a mechanism by which inappropriate exposure to estrogenic substances may cause adverse effects on spermatogenesis and male fertility. The reproductive phenotypes of mice deficient in estrogen receptors alpha and/or beta and aromatase are also compared to evaluate the physiological role of estrogen in male fertility. The review focuses on the effects of estrogen administration or deprivation, primarily in rodents, on the hypothalamo-pituitary-testis axis, testicular function (including Leydig cell, Sertoli cell, and germ cell development and function), and in the development and function of the efferent ductules and epididymis. The requirement for estrogen in normal male sexual behavior is also reviewed, along with the somewhat limited data on the fertility of men who lack either the capacity to produce or respond to estrogen. This review highlights the ability of exogenous estrogen exposure to perturb spermatogenesis and male fertility, as well as the emerging physiological role of estrogens in male fertility, suggesting that, in this local context, estrogenic substances should also be considered "male hormones."