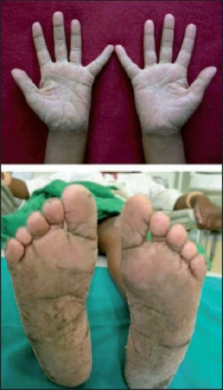 Mutations of the cathepsin C gene are responsible for Papillon-Lefèvre syndrome.

Miron A C Hart,  Steven Bowden,  M Michalec … (1999)
Papillon-Lefèvre syndrome (PLS) is an autosomal recessive disorder characterised by palmoplantar hyperkeratosis and severe early onset periodontitis that results in the premature loss of the primary and secondary dentitions. A major gene locus for PLS has been mapped to a 2.8 cM interval on chromosome 11q14. Correlation of physical and genetic maps of this interval indicate it includes at least 40 ESTs and six known genes including the lysosomal protease cathepsin C gene (CTSC). The CTSC message is expressed at high levels in a variety of immune cells including polymorphonuclear leucocytes, macrophages, and their precursors. By RT-PCR, we found CTSC is also expressed in epithelial regions commonly affected by PLS, including the palms, soles, knees, and oral keratinised gingiva. The 4.7 kb CTSC gene consists of two exons. Sequence analysis of CTSC from subjects affected with PLS from five consanguineous Turkish families identified four different mutations. An exon 1 nonsense mutation (856C-->T) introduces a premature stop codon at amino acid 286. Three exon 2 mutations were identified, including a single nucleotide deletion (2692delA) of codon 349 introducing a frameshift and premature termination codon, a 2 bp deletion (2673-2674delCT) that results in introduction of a stop codon at amino acid 343, and a G-->A substitution in codon 429 (2931G-->A) introducing a premature termination codon. All PLS patients were homozygous for cathepsin C mutations inherited from a common ancestor. Parents and sibs heterozygous for cathepsin C mutations do not show either the palmoplantar hyperkeratosis or severe early onset periodontitis characteristic of PLS. A more complete understanding of the functional physiology of cathepsin C carries significant implications for understanding normal and abnormal skin development and periodontal disease susceptibility.

A new look at the etiology and pathogenesis of early-onset periodontitis. Cementopathia revisited.

D Baab,  Robert C Page (1985)
For more than 20 years, investigators have unanimously agreed that human periodontitis is caused by bacterial colonization of the surfaces of the teeth and their extension apically. Recently, several investigators have demonstrated that most, if not all, individuals manifesting the early-onset, aggressive forms of periodontitis have abnormalities in their peripheral blood phagocytes which can be detected as abnormal cell motility or adherence. Because of the major role of these cells, especially the neutrophilic granulocytes, in host defense against the microbial onslaught at the gingival sulcus, these leukocyte abnormalities have been considered to be the major determinant of susceptibility to microbial infection and invasion of the periodontal tissues. In recent years the possibility that other etiologies may be involved has not been seriously considered. The purpose of the present communication is to focus attention on the idea that factors other than bacteria and host defense mechanisms may be of significance. We specifically want to call attention to a potentially important role for root cementum.