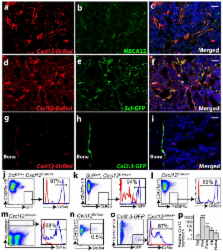 F Tronche, C Kellendonk, O Kretz … (1999)
The glucocorticoid receptor (Gr, encoded by the gene Grl1) controls transcription of target genes both directly by interaction with DNA regulatory elements and indirectly by cross-talk with other transcription factors. In response to various stimuli, including stress, glucocorticoids coordinate metabolic, endocrine, immune and nervous system responses and ensure an adequate profile of transcription. In the brain, Gr has been proposed to modulate emotional behaviour, cognitive functions and addictive states. Previously, these aspects were not studied in the absence of functional Gr because inactivation of Grl1 in mice causes lethality at birth (F.T., C.K. and G.S., unpublished data). Therefore, we generated tissue-specific mutations of this gene using the Cre/loxP -recombination system. This allowed us to generate viable adult mice with loss of Gr function in selected tissues. Loss of Gr function in the nervous system impairs hypothalamus-pituitary-adrenal (HPA)-axis regulation, resulting in increased glucocorticoid (GC) levels that lead to symptoms reminiscent of those observed in Cushing syndrome. Conditional mutagenesis of Gr in the nervous system provides genetic evidence for the importance of Gr signalling in emotional behaviour because mutant animals show an impaired behavioural response to stress and display reduced anxiety.

Sean Morrison, Allan Spradling (2008)
Niches are local tissue microenvironments that maintain and regulate stem cells. Long-predicted from mammalian studies, these structures have recently been characterized within several invertebrate tissues using methods that reliably identify individual stem cells and their functional requirements. Although similar single-cell resolution has usually not been achieved in mammalian tissues, principles likely to govern the behavior of niches in diverse organisms are emerging. Considerable progress has been made in elucidating how the microenvironment promotes stem cell maintenance. Mechanisms of stem cell maintenance are key to the regulation of homeostasis and likely contribute to aging and tumorigenesis when altered during adulthood.

Motonari Kondo, Irving L Weissman, Koichi Akashi (1997)
The existence of a common lymphoid progenitor that can only give rise to T cells, B cells, and natural killer (NK) cells remains controversial and constitutes an important gap in the hematopoietic lineage maps. Here, we report that the Lin(-)IL-7R(+)Thy-1(-)Sca-1loc-Kit(lo) population from adult mouse bone marrow possessed a rapid lymphoid-restricted (T, B, and NK) reconstitution capacity in vivo but completely lacked myeloid differentiation potential either in vivo or in vitro. A single Lin(-)IL-7R(+)Thy-1(-)Sca-1loc-Kit(lo) cell could generate at least both T and B cells. These data provide direct evidence for the existence of common lymphoid progenitors in sites of early hematopoiesis.