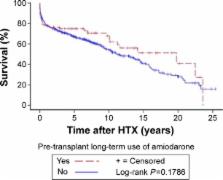 Amiodarone is a frequently used antiarrhythmic drug in patients with end-stage heart failure. Given its long half-life, pre-transplant use of amiodarone has been controversially discussed, with divergent results regarding morbidity and mortality after heart transplantation (HTX).

The aim of this study was to investigate the effects of long-term use of amiodarone before HTX on early post-transplant atrial fibrillation (AF) and mortality after HTX.

Five hundred and thirty patients (age ≥18 years) receiving HTX between June 1989 and December 2012 were included in this retrospective single-center study. Patients with long-term use of amiodarone before HTX (≥1 year) were compared to those without long-term use (none or <1 year of amiodarone). Primary outcomes were early post-transplant AF and mortality after HTX. The Kaplan–Meier estimator using log-rank tests was applied for freedom from early post-transplant AF and survival.

Of the 530 patients, 74 (14.0%) received long-term amiodarone therapy, with a mean duration of 32.3±26.3 months. Mean daily dose was 223.0±75.0 mg. Indications included AF, Wolff–Parkinson–White syndrome, ventricular tachycardia, and ventricular fibrillation. Patients with long-term use of amiodarone before HTX had significantly lower rates of early post-transplant AF ( P=0.0105). Further, Kaplan–Meier analysis of freedom from early post-transplant AF showed significantly lower rates of AF in this group ( P=0.0123). There was no statistically significant difference between patients with and without long-term use of amiodarone prior to HTX in 1-year ( P=0.8596), 2-year ( P=0.8620), 5-year ( P=0.2737), or overall follow-up mortality after HTX ( P=0.1049). Moreover, Kaplan–Meier survival analysis showed no statistically significant difference in overall survival ( P=0.1786).

Long-term use of amiodarone in patients before HTX significantly reduces early post-transplant AF and is not associated with increased mortality after HTX.

Douglas P Zipes,  Eric N Prystowsky,  James Heger (1984)
Interest in amiodarone has increased because of its remarkable efficacy as an antiarrhythmic agent. The purpose of this report is to review what is known about the electrophysiologic actions, hemodynamic effects, pharmacokinetics, alterations of thyroid function, response to treatment of supraventricular and ventricular tachyarrhythmias and adverse effects of amiodarone. Understanding the actions of amiodarone and its metabolism will provide more intelligent use of the drug and minimize the development of side effects. The mechanism by which amiodarone suppresses cardiac arrhythmias is not known and may relate to prolongation of refractoriness in all cardiac tissues, suppression of automaticity in some fibers, minimal slowing of conduction in fast channel-dependent tissue, or to interactions with the autonomic nervous system, alterations in thyroid metabolism or other factors. Amiodarone exerts definite but fairly minor negative inotropic effects that may be offset by its vasodilator actions. Amiodarone has a reduced clearance rate, large volume of distribution, low bioavailability and a long half-life that may last 2 months in patients receiving short-term therapy. Therapeutic serum concentrations range between 1.0 and 3.5 micrograms/ml. The drug suppresses recurrences of cardiac tachyarrhythmias in a high percent of patients, in the range of 80% or more for most supraventricular tachycardias and in about 66% of patients with ventricular tachyarrhythmias, sometimes requiring addition of a second antiarrhythmic agent. Side effects, particularly when high doses are used, may limit amiodarone's usefulness and include skin, corneal, thyroid, pulmonary, neurologic, gastrointestinal and hepatic dysfunction. Aggravation of cardiac arrhythmias occurs but serious arrhythmias are caused in less than 5% of patients. Amiodarone affects the metabolism of many other drugs and care must be used to reduce doses of agents combined with amiodarone.