The Geospatial Characteristics of a Social Movement Communication Network 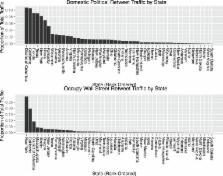 Social movements rely in large measure on networked communication technologies to organize and disseminate information relating to the movements’ objectives. In this work we seek to understand how the goals and needs of a protest movement are reflected in the geographic patterns of its communication network, and how these patterns differ from those of stable political communication. To this end, we examine an online communication network reconstructed from over 600,000 tweets from a thirty-six week period covering the birth and maturation of the American anticapitalist movement, Occupy Wall Street. We find that, compared to a network of stable domestic political communication, the Occupy Wall Street network exhibits higher levels of locality and a hub and spoke structure, in which the majority of non-local attention is allocated to high-profile locations such as New York, California, and Washington D.C. Moreover, we observe that information flows across state boundaries are more likely to contain framing language and references to the media, while communication among individuals in the same state is more likely to reference protest action and specific places and times. Tying these results to social movement theory, we propose that these features reflect the movement’s efforts to mobilize resources at the local level and to develop narrative frames that reinforce collective purpose at the national level.

Westminster Papers in Communication and Culture

Johan Bollen,  Huina Mao,  Xiao-Jun Zeng (2010)
Behavioral economics tells us that emotions can profoundly affect individual behavior and decision-making. Does this also apply to societies at large, i.e., can societies experience mood states that affect their collective decision making? By extension is the public mood correlated or even predictive of economic indicators? Here we investigate whether measurements of collective mood states derived from large-scale Twitter feeds are correlated to the value of the Dow Jones Industrial Average (DJIA) over time. We analyze the text content of daily Twitter feeds by two mood tracking tools, namely OpinionFinder that measures positive vs. negative mood and Google-Profile of Mood States (GPOMS) that measures mood in terms of 6 dimensions (Calm, Alert, Sure, Vital, Kind, and Happy). We cross-validate the resulting mood time series by comparing their ability to detect the public's response to the presidential election and Thanksgiving day in 2008. A Granger causality analysis and a Self-Organizing Fuzzy Neural Network are then used to investigate the hypothesis that public mood states, as measured by the OpinionFinder and GPOMS mood time series, are predictive of changes in DJIA closing values. Our results indicate that the accuracy of DJIA predictions can be significantly improved by the inclusion of specific public mood dimensions but not others. We find an accuracy of 87.6% in predicting the daily up and down changes in the closing values of the DJIA and a reduction of the Mean Average Percentage Error by more than 6%.

The authors gratefully acknowledge support from the National Science Foundation [ http://www.nsf.gov/] (grant CCF-1101743), DARPA [ http://www.darpa.mil/] (grant W911NF-12-1-0037), and the McDonnell Foundation [ http://www.jsmf.org/]. Any opinions, findings, and conclusions or recommendations expressed in this material are those of the author(s) and do not necessarily reflect the views of the funding agencies. The funders had no role in study design, data collection and analysis, decision to publish, or preparation of the manuscript.