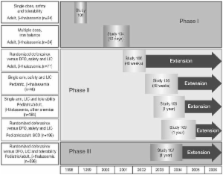 Although blood transfusions are important for patients with anemia, chronic transfusions inevitably lead to iron overload as humans cannot actively remove excess iron. The cumulative effects of iron overload lead to significant morbidity and mortality, if untreated. Although the current reference standard iron chelator deferoxamine has been used clinically for over four decades, its effectiveness is limited by a demanding therapeutic regimen that leads to poor compliance. Deferasirox (Exjade®, ICL670, Novartis Pharma AG, Basel, Switzerland) is a once-daily, oral iron chelator approved for the treatment of transfusional iron overload in adult and pediatric patients. The efficacy and safety of deferasirox have been established in a comprehensive clinical development program involving patients with various transfusion-dependent anemias. Deferasirox has a dose-dependent effect on iron burden, and is as efficacious as deferoxamine at comparable therapeutic doses. Deferasirox therapy can be tailored to a patient’s needs, as response is related to both dose and iron intake. Since deferasirox has a long half-life and is present in the plasma for 24 hours with once-daily dosing, it is unique in providing constant chelation coverage with a single dose. The availability of this convenient, effective, and well tolerated therapy represents a significant advance in the management of transfusional iron overload.

,  Craig R Cohen,  E Neufeld … (2004)
Treatment of patients with beta-thalassemia major has improved dramatically during the past 40 years; however, the current clinical status of these patients remains poorly characterized. We performed a cross-sectional study of 342 patients in the Registry of the National Institutes of Health-sponsored Thalassemia Clinical Research Network. Evidence of hepatitis C exposure was present in 35% of tested patients, was associated with age, and had a rate of spontaneous viral clearance of 33%. Ferritin levels ranged from 147 to 11 010 ng/mL (median, 1696 ng/mL). Median hepatic iron content was 7.8 mg/g dry weight and 23% of patients had values of 15 mg/g dry weight or higher. No patients 15 years or younger and 5% of patients aged 16 to 24 years had heart disease requiring medication. Ten percent had cirrhosis on biopsy. Endocrinologic complications were common among adults. Seventy-four (22%) patients had recent implantable central venous access devices (CVADs) placed. Among 80 episodes of bacteremia in 38 patients, 90% were attributable to the CVAD. Among 330 patients who had received deferoxamine chelation therapy, 224 (68%) reported no complications. We conclude that hepatitis C, iron-related organ dysfunction, and complications of iron chelation therapy are strongly age-dependent in North American patients with beta-thalassemia.

Cardiac morbidity and mortality in deferoxamine- or deferiprone-treated patients with thalassemia major.

Avital Cnaan,  Maria Domenica Cappellini,  Piero De Carli … (2006)
Deferoxamine (DFO) therapy has been associated with improved survival of thalassemia patients. However, cardiac disease remains the main cause of death in those patients. In 1995, the oral chelator deferiprone became available for clinical use. We compared the occurrence of cardiac disease in patients treated only with DFO and in those whose therapy was switched to deferiprone during the period of observation, from January 31, 1995, to December 31, 2003. All patients with thalassemia major treated in 7 Italian centers who were born between 1970 and 1993 and who had not experienced a cardiac event prior to January 1995 were included. DFO only was given to 359 patients, and 157 patients received deferiprone for part of the time. A total of 3,610 patient-years were observed on DFO and 750 on deferiprone. At baseline, the 2 groups were comparable for age and sex, while ferritin levels were significantly higher in patients switched to deferiprone. Fifty-two cardiac events, including 10 cardiac deaths, occurred during therapy with DFO. No cardiac events occurred during deferiprone therapy or within at least 18 months after the end of it. In the setting of a natural history study, deferiprone therapy was associated with significantly greater cardiac protection than deferoxamine in patients with thalassemia major.