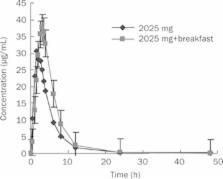 To evaluate the pharmacokinetics of L-threonate after single or multiple oral administrations and its safety profile in healthy Chinese volunteers.

This was an open-label, single- and multiple-dose study. The subjects were assigned to receive a single dose, 675, 2025, or 4050 mg, of calcium L-threonate ( n=12) or repeated doses of 2025 mg twice daily for 4 d ( n=12). Serial plasma and urine samples were analyzed with HPLC-MS/MS. Pharmacokinetic parameters of L-threonate were calculated using non-compartmental analysis with WinNonlin software.

In the single dose group, C max reached at 2.0 h and the mean t 1/2 was approximately 2.5 h. Area under curve (AUC) and C max increased with dose escalation, but dose proportionality was not observed over the range of 675 to 4050 mg. AUC and C max in the fasted subjects were lower compared with those in the non-fasted subjects. Cumulative urinary excretion of L-threonate over 24 h represented 5.9% of the administered dose with a mean Cl/r of 0.8 L/h. In the multiple-dose study, no accumulation appeared upon repeated doses of 2025 mg twice daily for 4 d. There were no serious adverse events that occurred during this study.

Calcium L-threonate was well tolerated in healthy Chinese subjects, with no pattern of dose-related adverse events. Plasma exposure increased with dose escalation, but linear pharmacokinetics were not observed over the studied doses. L-threonate was absorbed rapidly, and its absorption was enhanced by food intake. No systemic accumulation appeared after repeated administrations.

Philip Sambrook,  Cyrus Cooper (2006)
Osteoporosis is a serious public health issue. The past 10 years have seen great advances in our understanding of its epidemiology, pathophysiology, and treatment, and further advances are rapidly being made. Clinical assessment will probably evolve from decisions mainly being made on the basis of bone densitometry, to use of algorithms of absolute fracture risk. Biochemical markers of bone turnover are also likely to become more widely used. Bisphosphonates will probably remain the mainstay of therapy, but improved understanding of the optimum amount of remodelling suppression and duration of therapy will be important. At the same time, other diagnostic and therapeutic approaches, including biological agents, are likely to become more widespread.

Relationship between collagen synthesis and expression of the osteoblast phenotype in MC3T3-E1 cells.

Rajesh Iyer,  Y Cui,  Renny Franceschi … (1994)
Treatment of mouse MC3T3-E1 cells with ascorbic acid initiates the formation of a collagenous extracellular matrix and synthesis of several osteoblast-related proteins. We recently showed that ascorbic acid dramatically increases alkaline phosphatase and osteocalcin mRNAs and that this induction is blocked by inhibitors of collagen triple-helix formation (Franceschi and Iyer, J Bone Miner Res 7:235). In the present study, the relationship between collagen matrix formation and osteoblast-specific gene expression is explored in greater detail. Kinetic studies revealed that ascorbic acid increased proline hydroxylation in the intracellular procollagen pool within 1 h and stimulated the cleavage of type I collagen propeptides beginning at 2.5 h. Mature alpha 1(I) and alpha 2(I) collagen components were first detected at 10 h and continued to increase in both cell layer and culture medium for up to 72 h. Ascorbic acid also increased the rate of procollagen secretion from cell layers to culture medium. The secretion of another matrix protein, fibronectin, was only slightly affected. Alkaline phosphatase or its mRNA was first detected 2-3 days after ascorbic acid addition, but osteocalcin mRNA was not seen until day 6. Two inhibitors of collagen triple-helix formation, ethyl-3,4-dihydroxybenzoate and 3,4-dehydroproline, inhibited procollagen hydroxylation and alkaline phosphatase induction. 3,4-Dehydroproline also inhibited the induction of alkaline phosphatase and osteocalcin mRNAs. Surprisingly, induction was not blocked if cells were exposed to ascorbic acid before inhibitor addition. Alkaline phosphatase was also partially inhibited if cells were grown in the presence of purified bacterial collagenase. These results indicate that the induction of osteoblast markers by ascorbic acid does not require the continuous hydroxylation and processing of procollagens and suggest that a stable, possibly matrix-associated signal is generated at early times after ascorbic acid addition that allows subsequent induction of osteoblast-related genes.