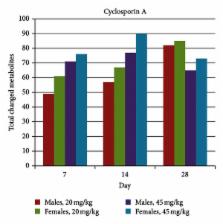 Addressing safety concerns such as drug-induced kidney injury (DIKI) early in the drug pharmaceutical development process ensures both patient safety and efficient clinical development. We describe a unique adjunct to standard safety assessment wherein the metabolite profile of treated animals is compared with the MetaMap Tox metabolomics database in order to predict the potential for a wide variety of adverse events, including DIKI. To examine this approach, a study of five compounds (phenytoin, cyclosporin A, doxorubicin, captopril, and lisinopril) was initiated by the Technology Evaluation Consortium under the auspices of the Drug Safety Executive Council (DSEC). The metabolite profiles for rats treated with these compounds matched established reference patterns in the MetaMap Tox metabolomics database indicative of each compound's well-described clinical toxicities. For example, the DIKI associated with cyclosporine A and doxorubicin was correctly predicted by metabolite profiling, while no evidence for DIKI was found for phenytoin, consistent with its clinical picture. In some cases the clinical toxicity (hepatotoxicity), not generally seen in animal studies, was detected with MetaMap Tox. Thus metabolite profiling coupled with the MetaMap Tox metabolomics database offers a unique and powerful approach for augmenting safety assessment and avoiding clinical adverse events such as DIKI.

A metabolomic comparison of urinary changes in type 2 diabetes in mouse, rat, and human.

R Salek,  T Hough,  George E. Bentley … (2007)
Type 2 diabetes mellitus is the result of a combination of impaired insulin secretion with reduced insulin sensitivity of target tissues. There are an estimated 150 million affected individuals worldwide, of whom a large proportion remains undiagnosed because of a lack of specific symptoms early in this disorder and inadequate diagnostics. In this study, NMR-based metabolomic analysis in conjunction with multivariate statistics was applied to examine the urinary metabolic changes in two rodent models of type 2 diabetes mellitus as well as unmedicated human sufferers. The db/db mouse and obese Zucker (fa/fa) rat have autosomal recessive defects in the leptin receptor gene, causing type 2 diabetes. 1H-NMR spectra of urine were used in conjunction with uni- and multivariate statistics to identify disease-related metabolic changes in these two animal models and human sufferers. This study demonstrates metabolic similarities between the three species examined, including metabolic responses associated with general systemic stress, changes in the TCA cycle, and perturbations in nucleotide metabolism and in methylamine metabolism. All three species demonstrated profound changes in nucleotide metabolism, including that of N-methylnicotinamide and N-methyl-2-pyridone-5-carboxamide, which may provide unique biomarkers for following type 2 diabetes mellitus progression.

Paul Watkins,  Roshan Shrestha,  Joseph A. Galanko … (2004)
Studies of acute liver failure from drugs have included cases mostly attributed to acetaminophen (APAP) but have reported limited data on other drugs. We used the United Network for Organ Sharing (UNOS) liver transplant database from 1990 to 2002 to identify recipients and estimate a U.S. population-based rate of liver transplantation due to acute liver failure from drugs. Patients were identified if their diagnosis was acute hepatic necrosis from an implicated drug at the time of transplant. Liver transplantation for drug hepatotoxicity accounted for 15% of liver transplants for acute liver failure over the study period. In our cohort (n = 270), 206 (76%) recipients were female. APAP alone, or in combination with another drug, accounted for 133 (49%) cases. In the non-acetaminophen (non-APAP) group (n = 137), the most frequently implicated drugs were: isoniazid, n = 24 (17.5%); propylthiouracil, n = 13 (9.5%); and phenytoin and valproate in 10 (7.3%) cases each. One-year patient and graft survival for the entire cohort was 77 and 71%, respectively. Among Caucasians (n = 206) and African-Americans (n = 48), APAP only was implicated in 110 (53%) patients and 12 (25%) patients, respectively, and non-APAP drugs were implicated in 96 (47%) patients and 36 (75%) patients, respectively (P =.0004). Among African-Americans in the non-APAP group, 28 (78%) were women. In conclusion four drugs were implicated in 42% of patients undergoing liver transplantation for acute liver failure due to drugs other than APAP. The increased frequency of African-American women undergoing liver transplantation for non-APAP drug induced liver injury warrants further study.

Metabonomics in toxicology: a review.

G. Robertson (2005)
Metabonomics and its many pseudonyms (metabolomics, metabolic profiling, etc.) have exploded onto the scientific scene in the past 2 to 3 years. Nowhere has the impact been more profound than within the toxicology community. Within this community there exists a great deal of uncertainty about whether metabonomics is something to count on or just the most recent technological flash in the pan. Much of the uncertainty is due to unfamiliarity with analytical and chemometric facets of the technology and the attendant fear of any "black-box." With those fears in mind, metabonomics technology is reviewed with particular emphasis on toxicologic applications in preclinical drug development. The jargon, logistics, and applications of the technology are covered in some detail with emphasis on recent work in the field.