A New Proposal for the Pathogenic Mechanism of Non-Coeliac/Non-Allergic Gluten/Wheat Sensitivity: Piecing Together the Puzzle of Recent Scientific Evidence 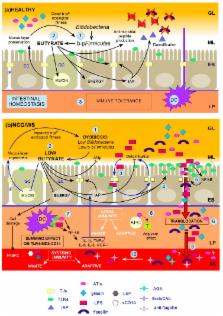 Non-coeliac/non-allergic gluten/wheat sensitivity (NCG/WS) is a gluten-related disorder, the pathogenesis of which remains unclear. Recently, the involvement of an increased intestinal permeability has been recognized in the onset of this clinical condition. However, mechanisms through which it takes place are still unclear. In this review, we attempt to uncover these mechanisms by providing, for the first time, an integrated vision of recent scientific literature, resulting in a new hypothesis about the pathogenic mechanisms involved in NCG/WS. According to this, the root cause of NCG/WS is a particular dysbiotic profile characterized by decreased butyrate-producing- Firmicutes and/or Bifidobacteria, leading to low levels of intestinal butyrate. Beyond a critical threshold of the latter, a chain reaction of events and vicious circles occurs, involving other protagonists such as microbial lipopolysaccharide (LPS), intestinal alkaline phosphatase (IAP) and wheat α-amylase trypsin inhibitors (ATIs). NCG/WS is likely to be a multi-factor-onset disorder, probably transient and preventable, related to quality and balance of the diet, and not to the presence of gluten in itself. If future studies confirm our proposal, this would have important implications both for the definition of the disease, as well as for the prevention and therapeutic-nutritional management of individuals with NCG/WS.

Eileen Grady,  Cesare Cremon,  A Morselli … (2004)
The mechanisms underlying abdominal pain perception in irritable bowel syndrome (IBS) are poorly understood. Intestinal mast cell infiltration may perturb nerve function leading to symptom perception. We assessed colonic mast cell infiltration, mediator release, and spatial interactions with mucosal innervation and their correlation with abdominal pain in IBS patients. IBS patients were diagnosed according to Rome II criteria and abdominal pain quantified according to a validated questionnaire. Colonic mucosal mast cells were identified immunohistochemically and quantified with a computer-assisted counting method. Mast cell tryptase and histamine release were analyzed immunoenzymatically. Intestinal nerve to mast cell distance was assessed with electron microscopy. Thirty-four out of 44 IBS patients (77%) showed an increased area of mucosa occupied by mast cells as compared with controls (9.2% +/- 2.5% vs. 3.3 +/- 0.8%, respectively; P < 0.001). There was a 150% increase in the number of degranulating mast cells (4.76 +/- 3.18/field vs. 2.42 +/- 2.26/field, respectively; P = 0.026). Mucosal content of tryptase was increased in IBS and mast cells spontaneously released more tryptase (3.22 +/- 3.48 pmol/min/mg vs. 0.87 +/- 0.65 pmol/min/mg, respectively; P = 0.015) and histamine (339.7 +/- 59.0 ng/g vs. 169.3 +/- 130.6 ng/g, respectively; P = 0.015). Mast cells located within 5 microm of nerve fibers were 7.14 +/- 3.87/field vs. 2.27 +/- 1.63/field in IBS vs. controls (P < 0.001). Only mast cells in close proximity to nerves were significantly correlated with severity and frequency of abdominal pain/discomfort (P < 0.001 and P = 0.003, respectively). Colonic mast cell infiltration and mediator release in proximity to mucosal innervation may contribute to abdominal pain perception in IBS patients.

No effects of gluten in patients with self-reported non-celiac gluten sensitivity after dietary reduction of fermentable, poorly absorbed, short-chain carbohydrates.

G Muir,  L. Peters-Bax,  Ourania Rosella … (2013)
Patients with non-celiac gluten sensitivity (NCGS) do not have celiac disease but their symptoms improve when they are placed on gluten-free diets. We investigated the specific effects of gluten after dietary reduction of fermentable, poorly absorbed, short-chain carbohydrates (fermentable, oligo-, di-, monosaccharides, and polyols [FODMAPs]) in subjects believed to have NCGS. We performed a double-blind cross-over trial of 37 subjects (aged 24-61 y, 6 men) with NCGS and irritable bowel syndrome (based on Rome III criteria), but not celiac disease. Participants were randomly assigned to groups given a 2-week diet of reduced FODMAPs, and were then placed on high-gluten (16 g gluten/d), low-gluten (2 g gluten/d and 14 g whey protein/d), or control (16 g whey protein/d) diets for 1 week, followed by a washout period of at least 2 weeks. We assessed serum and fecal markers of intestinal inflammation/injury and immune activation, and indices of fatigue. Twenty-two participants then crossed over to groups given gluten (16 g/d), whey (16 g/d), or control (no additional protein) diets for 3 days. Symptoms were evaluated by visual analogue scales. In all participants, gastrointestinal symptoms consistently and significantly improved during reduced FODMAP intake, but significantly worsened to a similar degree when their diets included gluten or whey protein. Gluten-specific effects were observed in only 8% of participants. There were no diet-specific changes in any biomarker. During the 3-day rechallenge, participants' symptoms increased by similar levels among groups. Gluten-specific gastrointestinal effects were not reproduced. An order effect was observed. In a placebo-controlled, cross-over rechallenge study, we found no evidence of specific or dose-dependent effects of gluten in patients with NCGS placed diets low in FODMAPs. Copyright © 2013 AGA Institute. Published by Elsevier Inc. All rights reserved.

Diets that differ in their FODMAP content alter the colonic luminal microenvironment.