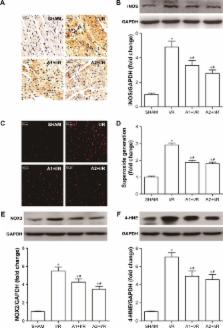 Alginate oligosaccharide (AOS) has recently demonstrated the ability to protect against acute doxorubicin cardiotoxicity and neurodegenerative disorders by inhibiting oxidative stress and endoplasmic reticulum (ER) stress-mediated apoptosis, which are both involved in myocardial ischemia/reperfusion (I/R) injury. In the present study, we investigated whether pretreatment with AOS protects against myocardial I/R injury in mice and explored potential cardioprotective mechanisms. AOS pretreatment significantly decreased the infarct size, reduced the cardiac troponin-I concentration, and ameliorated the cardiac dysfunction. Accompanied with the reduced cardiac injury, AOS pretreatment clearly decreased I/R-induced myocardial apoptosis. With regard to mechanism, AOS pretreatment markedly attenuated nitrative/oxidative stress, as evidenced by decreases in 3-nitrotyrosine content and superoxide generation, and downregulated inducible nitric oxide synthase, NADPH oxidase2, and 4-hydroxynonenal. Moreover, AOS pretreatment decreased myocardial apoptosis by inhibiting the ER stress-mediated apoptosis pathway, which is reflected by the downregulation of C/EBP homologous protein, glucose-regulated protein 78, caspase-12, and Bcl-2-associated X protein, and by the upregulation of the anti-apoptotic protein B-cell lymphoma-2. Collectively, these findings demonstrate that AOS renders the heart resistant to I/R injury, at least in part, by inhibiting nitrative/oxidative stress and ER stress-mediated apoptosis.

C. Xu (2005)
Disturbances in the normal functions of the ER lead to an evolutionarily conserved cell stress response, the unfolded protein response, which is aimed initially at compensating for damage but can eventually trigger cell death if ER dysfunction is severe or prolonged. The mechanisms by which ER stress leads to cell death remain enigmatic, with multiple potential participants described but little clarity about which specific death effectors dominate in particular cellular contexts. Important roles for ER-initiated cell death pathways have been recognized for several diseases, including hypoxia, ischemia/reperfusion injury, neurodegeneration, heart disease, and diabetes.

A novel and efficient model of coronary artery ligation and myocardial infarction in the mouse.

George W. Koch,  L. Ma,  Qian Fan … (2010)
coronary artery ligation to induce myocardial infarction (MI) in mice is typically performed by an invasive and time-consuming approach that requires ventilation and chest opening (classic method), often resulting in extensive tissue damage and high mortality. We developed a novel and rapid surgical method to induce MI that does not require ventilation. the purpose of this study was to develop and comprehensively describe this method and directly compare it to the classic method. male C57/B6 mice were grouped into 4 groups: new method MI (MI-N) or sham (S-N) and classic method MI (MI-C) or sham (S-C). In the new method, heart was manually exposed without intubation through a small incision and MI was induced. In the classic method, MI was induced through a ventilated thoracotomy. Similar groups were used in an ischemia/reperfusion injury model. This novel MI procedure is rapid, with an average procedure time of 1.22 ± 0.05 minutes, whereas the classic method requires 23.2 ± 0.6 minutes per procedure. Surgical mortality was 3% in MI-N and 15.9% in MI-C. The rate of arrhythmia was significantly lower in MI-N. The postsurgical levels of tumor necrosis factor-α and myeloperoxidase were lower in new method, indicating less inflammation. Overall, 28-day post-MI survival rate was 68% with MI-N and 48% with MI-C. Importantly, there was no difference in infarct size or post-MI cardiac function between the methods. this new rapid method of MI in mice represents a more efficient and less damaging model of myocardial ischemic injury compared with the classic method.

Péter Ferdinandy,  Richard Schulz (2003)
There appears to be a controversy in the study of myocardial ischaemia-reperfusion injury and preconditioning whether nitric oxide (NO) plays a protective or detrimental role. A number of findings and the interpretation of the results to date do not support such a controversy. An understanding of the latest developments in NO, superoxide (O(2)(-)*) and peroxynitrite (ONOO(-)) biology, as well as the various ischaemic animal models utilized is necessary to resolve the apparent controversy. NO is an important cardioprotective molecule via its vasodilator, antioxidant, antiplatelet, and antineutrophil actions and it is essential for normal heart function. However, NO is detrimental if it combines with O(2)(-)* to form ONOO(-) which rapidly decomposes to highly reactive oxidant species. There is a critical balance between cellular concentrations of NO, O(2)(-)*, and superoxide dismutase which physiologically favour NO production but in pathological conditions such as ischaemia and reperfusion result in ONOO(-) formation. In contrast, exposure of the heart to brief episode(s) of ischaemia markedly enhances its ability to withstand a subsequent ischaemic injury. The triggering of this endogenous cardioprotective mechanism known as preconditioning requires both NO and O(2)(-)* synthesis. However, preconditioning in turn attenuates the overproduction of NO, O(2)(-)* and ONOO(-) during a subsequent episode of ischaemia and reperfusion, thereby protecting the heart. Here we review the roles of NO, O(2)(-)*, and ONOO(-) in both ischaemia-reperfusion injury and preconditioning.