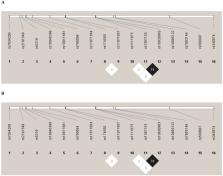 Background: In a previous survey, an elevated fasting glucose level (FG) and/or known type 2 diabetes mellitus (T2DM) were significantly more frequent in the Roma population than in the Hungarian general population. We assessed whether the distribution of 16 single nucleotide polymorphisms (SNPs) with unequivocal effects on the development of T2DM contributes to this higher prevalence. Methods: Genetic risk scores, unweighted (GRS) and weighted (wGRS), were computed and compared between the study populations. Associations between GRSs and FG levels and T2DM status were investigated in separate and combined study populations. Results: The Hungarian general population carried a greater genetic risk for the development of T2DM (GRS General = 15.38 ± 2.70 vs. GRS Roma = 14.80 ± 2.68, p < 0.001; wGRS General = 1.41 ± 0.32 vs. wGRS Roma = 1.36 ± 0.31, p < 0.001). In the combined population models, GRSs and wGRSs showed significant associations with elevated FG ( p < 0.001) and T2DM ( p < 0.001) after adjusting for ethnicity, age, sex, body mass index (BMI), high-density Lipoprotein Cholesterol (HDL-C), and triglyceride (TG). In these models, the effect of ethnicity was relatively strong on both outcomes (FG levels: βethnicity = 0.918, p < 0.001; T2DM status: OR ethnicity = 2.484, p < 0.001). Conclusions: The higher prevalence of elevated FG and/or T2DM among Roma does not seem to be directly linked to their increased genetic load but rather to their environmental/cultural attributes. Interventions targeting T2DM prevention among Roma should focus on harmful environmental exposures related to their unhealthy lifestyle.

Benjamin Voight,  Laura J. Scott,  Valgerdur Steinthorsdottir … (2010)
By combining genome-wide association data from 8,130 individuals with type 2 diabetes (T2D) and 38,987 controls of European descent and following up previously unidentified meta-analysis signals in a further 34,412 cases and 59,925 controls, we identified 12 new T2D association signals with combined P<5x10(-8). These include a second independent signal at the KCNQ1 locus; the first report, to our knowledge, of an X-chromosomal association (near DUSP9); and a further instance of overlap between loci implicated in monogenic and multifactorial forms of diabetes (at HNF1A). The identified loci affect both beta-cell function and insulin action, and, overall, T2D association signals show evidence of enrichment for genes involved in cell cycle regulation. We also show that a high proportion of T2D susceptibility loci harbor independent association signals influencing apparently unrelated complex traits.

The genetics of type 2 diabetes: what have we learned from GWAS?

Liana Billings,  C. Florez (2010)
Type 2 diabetes mellitus has been at the forefront of human diseases and phenotypes studied by new genetic analyses. Thanks to genome-wide association studies, we have made substantial progress in elucidating the genetic basis of type 2 diabetes. This review summarizes the concept, history, and recent discoveries produced by genome-wide association studies for type 2 diabetes and glycemic traits, with a focus on the key notions we have gleaned from these efforts. Genome-wide association findings have illustrated novel pathways, pointed toward fundamental biology, confirmed prior epidemiological observations, drawn attention to the role of β-cell dysfunction in type 2 diabetes, explained ~10% of disease heritability, tempered our expectations with regard to their use in clinical prediction, and provided possible targets for pharmacotherapy and pharmacogenetic clinical trials. We can apply these lessons to future investigation so as to improve our understanding of the genetic basis of type 2 diabetes. © 2010 New York Academy of Sciences.