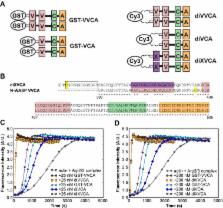 During cell locomotion and endocytosis, membrane-tethered WASP proteins stimulate actin filament nucleation by the Arp2/3 complex. This process generates highly branched arrays of filaments that grow toward the membrane to which they are tethered, a conflict that seemingly would restrict filament growth. Using three-color single-molecule imaging in vitro we revealed how the dynamic associations of Arp2/3 complex with mother filament and WASP are temporally coordinated with initiation of daughter filament growth. We found that WASP proteins dissociated from filament-bound Arp2/3 complex prior to new filament growth. Further, mutations that accelerated release of WASP from filament-bound Arp2/3 complex proportionally accelerated branch formation. These data suggest that while WASP promotes formation of pre-nucleation complexes, filament growth cannot occur until it is triggered by WASP release. This provides a mechanism by which membrane-bound WASP proteins can stimulate network growth without restraining it.

Most cells are neither perfect spheres nor amorphous blobs, but instead have characteristic shapes that enable them to carry out specific roles within tissues or organs. These shapes are established by a type of scaffolding, called the cytoskeleton, that gives structure to the cell, and also forms networks over which other proteins, and even organelles, can travel.

The filaments that make up the cytoskeleton are composed of various proteins, one of which is called actin. Cellular actin filaments can grow by adding new actin molecules, and actin filaments can also have ‘branches’ that fork out from the mother filament. Branches grow out of an assembly of seven proteins known as the Arp2/3 complex, which attaches to the side of the mother filament. Branch growth is triggered by binding to the Arp2/3 complex of an additional protein, WASP, but the sequence of events required to initiate a new branch is not well understood. In particular, WASP is bound to cell membranes; at some point it must detach from the Arp2/3 complex so that the nearness of the membrane does not interfere with the growth of branches. Now, Smith et al. uncover how branch formation is triggered, and define a new role played by WASP in this process.

It is known that a specific region of the WASP protein called the VCA domain binds to both the Arp2/3 complex and actin. Smith et al. studied how this domain could initiate branch formation, and showed that a pair of VCA domains linked to each other, along with an Arp2/3 complex, could interact jointly with an existing actin filament before a new branch formed. However, new branches did not form unless the VCA-domain pair detached from the actin filament, leaving the Arp2/3 complex behind. Additionally, Smith et al. found that mutant VCA-domain pairs detached from the actin filament at different rates, which then determined the chance that a new branch formed.

Cellular motility driven by assembly and disassembly of actin filaments.

Thomas Pollard,  Gary Borisy (2003)
Motile cells extend a leading edge by assembling a branched network of actin filaments that produces physical force as the polymers grow beneath the plasma membrane. A core set of proteins including actin, Arp2/3 complex, profilin, capping protein, and ADF/cofilin can reconstitute the process in vitro, and mathematical models of the constituent reactions predict the rate of motion. Signaling pathways converging on WASp/Scar proteins regulate the activity of Arp2/3 complex, which mediates the initiation of new filaments as branches on preexisting filaments. After a brief spurt of growth, capping protein terminates the elongation of the filaments. After filaments have aged by hydrolysis of their bound ATP and dissociation of the gamma phosphate, ADF/cofilin proteins promote debranching and depolymerization. Profilin catalyzes the exchange of ADP for ATP, refilling the pool of ATP-actin monomers bound to profilin, ready for elongation.

Actin, a central player in cell shape and movement.

David Cooper,  Thomas Pollard (2009)
The protein actin forms filaments that provide cells with mechanical support and driving forces for movement. Actin contributes to biological processes such as sensing environmental forces, internalizing membrane vesicles, moving over surfaces, and dividing the cell in two. These cellular activities are complex; they depend on interactions of actin monomers and filaments with numerous other proteins. Here, we present a summary of the key questions in the field and suggest how those questions might be answered. Understanding actin-based biological phenomena will depend on identifying the participating molecules and defining their molecular mechanisms. Comparisons of quantitative measurements of reactions in live cells with computer simulations of mathematical models will also help generate meaningful insights.

The interaction between N-WASP and the Arp2/3 complex links Cdc42-dependent signals to actin assembly.

Rajat Rohatgi,  Le Ma,  Hiroaki Miki … (1999)
Although small GTP-binding proteins of the Rho family have been implicated in signaling to the actin cytoskeleton, the exact nature of the linkage has remained obscure. We describe a novel mechanism that links one Rho family member, Cdc42, to actin polymerization. N-WASP, a ubiquitously expressed Cdc42-interacting protein, is required for Cdc42-stimulated actin polymerization in Xenopus egg extracts. The C terminus of N-WASP binds to the Arp2/3 complex and dramatically stimulates its ability to nucleate actin polymerization. Although full-length N-WASP is less effective, its activity can be greatly enhanced by Cdc42 and phosphatidylinositol (4,5) bisphosphate. Therefore, N-WASP and the Arp2/3 complex comprise a core mechanism that directly connects signal transduction pathways to the stimulation of actin polymerization.