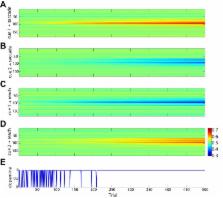 Decision making is a vital component of human and animal behavior that involves selecting between alternative options and generating actions to implement the choices. Although decisions can be as simple as choosing a goal and then pursuing it, humans and animals usually have to make decisions in dynamic environments where the value and the availability of an option change unpredictably with time and previous actions. A predator chasing multiple prey exemplifies how goals can dynamically change and compete during ongoing actions. Classical psychological theories posit that decision making takes place within frontal areas and is a separate process from perception and action. However, recent findings argue for additional mechanisms and suggest the decisions between actions often emerge through a continuous competition within the same brain regions that plan and guide action execution. According to these findings, the sensorimotor system generates concurrent action-plans for competing goals and uses online information to bias the competition until a single goal is pursued. This information is diverse, relating to both the dynamic value of the goal and the cost of acting, creating a challenging problem in integrating information across these diverse variables in real time. We introduce a computational framework for dynamically integrating value information from disparate sources in decision tasks with competing actions. We evaluated the framework in a series of oculomotor and reaching decision tasks and found that it captures many features of choice/motor behavior, as well as its neural underpinnings that previously have eluded a common explanation.

In high-pressure situations, such as driving on a highway or flying a plane, people have limited time to select between competing options while acting. Each option is usually accompanied with reward benefits (e.g., avoid traffic) and action costs (e.g., fuel consumption) that characterize the value of the option. The value and the availability of an option can change dynamically even during ongoing actions which compounds the decision-making challenge. How the brain dynamically integrates value information from disparate sources and selects between competing options is still poorly understood. In the current study, we present a neurodynamical framework to show how a distributed brain network can solve the problem of value integration and action selection in decisions with competing alternatives. It combines dynamic neural field theory with stochastic optimal control theory, and includes circuitry for perception, expected reward, effort cost and decision-making. It provides a principled way to explain both the neural and the behavioral findings from a series of visuomotor decision tasks in human and animal studies. For instance, the model shows how the competitive interactions between populations of neurons within and between sensorimotor regions can result in “spatial-averaging” movements, and how decision-variables influence neural activity and choice behavior.

C J McClelland,  Amelia M Usher (2001)
The time course of perceptual choice is discussed in a model of gradual, leaky, stochastic, and competitive information accumulation in nonlinear decision units. Special cases of the model match a classical diffusion process, but leakage and competition work together to address several challenges to existing diffusion, random walk, and accumulator models. The model accounts for data from choice tasks using both time-controlled (e.g., response signal) and standard reaction time paradigms and its adequacy compares favorably with other approaches. A new paradigm that controls the time of arrival of information supporting different choice alternatives provides further support. The model captures choice behavior regardless of the number of alternatives, accounting for the log-linear relation between reaction time and number of alternatives (Hick's law) and explains a complex pattern of visual and contextual priming in visual word identification.

The framing of decisions and the psychology of choice.

D Kahneman,  A Tversky (1981)
The psychological principles that govern the perception of decision problems and the evaluation of probabilities and outcomes produce predictable shifts of preference when the same problem is framed in different ways. Reversals of preference are demonstrated in choices regarding monetary outcomes, both hypothetical and real, and in questions pertaining to the loss of human lives. The effects of frames on preferences are compared to the effects of perspectives on perceptual appearance. The dependence of preferences on the formulation of decision problems is a significant concern for the theory of rational choice.

Camillo Padoa-Schioppa,  John Assad (2006)
Economic choice is the behaviour observed when individuals select one among many available options. There is no intrinsically 'correct' answer: economic choice depends on subjective preferences. This behaviour is traditionally the object of economic analysis and is also of primary interest in psychology. However, the underlying mental processes and neuronal mechanisms are not well understood. Theories of human and animal choice have a cornerstone in the concept of 'value'. Consider, for example, a monkey offered one raisin versus one piece of apple: behavioural evidence suggests that the animal chooses by assigning values to the two options. But where and how values are represented in the brain is unclear. Here we show that, during economic choice, neurons in the orbitofrontal cortex (OFC) encode the value of offered and chosen goods. Notably, OFC neurons encode value independently of visuospatial factors and motor responses. If a monkey chooses between A and B, neurons in the OFC encode the value of the two goods independently of whether A is presented on the right and B on the left, or vice versa. This trait distinguishes the OFC from other brain areas in which value modulates activity related to sensory or motor processes. Our results have broad implications for possible psychological models, suggesting that economic choice is essentially choice between goods rather than choice between actions. In this framework, neurons in the OFC seem to be a good candidate network for value assignment underlying economic choice.

This work was funded by NIH: R01EY007492, P50MH942581A, Sloan-Swartz fellowship for computational neuroscience: 2012–9, DARPA: REPAIR project. The funders had no role in study design, data collection and analysis, decision to publish, or preparation of the manuscript.