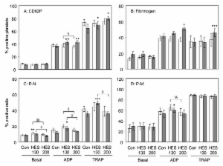 Hydroxyethyl starch (HES) solutions are widely used for volume replacement therapy but are also known to compromise coagulation, impair renal function and increase long-term mortality. To test the hypotheses that HES 130/0.4 has fewer adverse effects than HES 200/0.5 and exerts anti-inflammatory properties, we compared the effects of HES 130/0.4, HES 200/0.5 and saline on in vitro haemostasis and pro-inflammatory platelet function.

Whole blood samples from healthy volunteers were mixed with 6% HES 130/0.4, 10% HES 200/0.5, or normal saline to achieve a final haemodilution rate of 10% or 40%. Haemostatic capacity was characterised by thromboelastography (ROTEM) and measurement for FXIIIa activity. Platelet activation and pro-inflammatory platelet functions were characterised by flow cytometry measuring the platelet activation marker CD62P and binding of fibrinogen to platelets as well as the formation of heterotypic platelet-leukocyte conjugates.

Compared with saline, HES 130/0.4 dose-dependently impaired formation and firmness of the fibrin clot but did not affect the fibrin crosslinking activity of FXIIIa. At 40% but not at 10% haemodilution rate, HES 200/0.5 also increased platelet fibrinogen binding and both HES solutions increased expression of CD62P, the main receptor for platelet-leukocyte adhesion. HES 130/0.4 but not HES 200/0.5 increased formation of platelet-neutrophil conjugates and, to a lesser degree, platelet-monocyte conjugates.

Our data demonstrate that HES 130/0.4 has similar adverse effects as HES 200/0.5. In particular, both types of HES impair coagulation capacity and stimulate, rather than attenuate, pro-inflammatory platelet function.

Andreas Meier-Hellmann,  Norbert Weiler,  Charles Natanson … (2008)
The role of intensive insulin therapy in patients with severe sepsis is uncertain. Fluid resuscitation improves survival among patients with septic shock, but evidence is lacking to support the choice of either crystalloids or colloids. In a multicenter, two-by-two factorial trial, we randomly assigned patients with severe sepsis to receive either intensive insulin therapy to maintain euglycemia or conventional insulin therapy and either 10% pentastarch, a low-molecular-weight hydroxyethyl starch (HES 200/0.5), or modified Ringer's lactate for fluid resuscitation. The rate of death at 28 days and the mean score for organ failure were coprimary end points. The trial was stopped early for safety reasons. Among 537 patients who could be evaluated, the mean morning blood glucose level was lower in the intensive-therapy group (112 mg per deciliter [6.2 mmol per liter]) than in the conventional-therapy group (151 mg per deciliter [8.4 mmol per liter], P<0.001). However, at 28 days, there was no significant difference between the two groups in the rate of death or the mean score for organ failure. The rate of severe hypoglycemia (glucose level, < or = 40 mg per deciliter [2.2 mmol per liter]) was higher in the intensive-therapy group than in the conventional-therapy group (17.0% vs. 4.1%, P<0.001), as was the rate of serious adverse events (10.9% vs. 5.2%, P=0.01). HES therapy was associated with higher rates of acute renal failure and renal-replacement therapy than was Ringer's lactate. The use of intensive insulin therapy placed critically ill patients with sepsis at increased risk for serious adverse events related to hypoglycemia. As used in this study, HES was harmful, and its toxicity increased with accumulating doses. (ClinicalTrials.gov number, NCT00135473.) 2008 Massachusetts Medical Society

Alexander Zarbock,  Klaus Ley,  R Polanowska-Grabowska (2007)
Platelets are essential for primary hemostasis, but they also play an important pro-inflammatory role. Platelets normally circulate in a quiescent state. Upon activation, platelets can secrete and present various molecules, change their shape as well as the expression pattern of adhesion molecules. These changes are associated with the adhesion of platelets to leukocytes and the vessel wall. The interaction of platelets with neutrophils promotes the recruitment of neutrophils into inflammatory tissue and thus participates in host defense. This interaction of neutrophils with platelets is mainly mediated through P-selectin and beta(2) and beta(3) integrins (CD11b/CD18, CD41/CD61). Platelets can also interact with endothelial cells and monocytes. Adherent platelets promote the 'secondary capture' of neutrophils and other leukocytes. In addition, platelets secrete neutrophil and endothelial activators inducing production of inflammatory cytokines. Thus, platelets are important amplifiers of acute inflammation.

Effects of hydroxyethylstarch and gelatin on renal function in severe sepsis: a multicentre randomised study.

F Lemaire,  I Cattaneo,  M. Mamzer-Bruneel … (2001)
Hydroxyethylstarch used for volume restoration in brain-dead kidney donors has been associated with impaired kidney function in the transplant recipients. We undertook a multicentre randomised study to assess the frequency of acute renal failure (ARF) in patients with severe sepsis or septic shock treated with hydroxyethylstarch or gelatin. Adults with severe sepsis or septic shock were enrolled prospectively in three intensive-care units in France. They were randomly assigned 6% hydroxyethylstarch (200 kDa, 0.60-0.66 substitution) or 3% fluid-modified gelatin. The primary endpoint was ARF (a two-fold increase in serum creatinine from baseline or need for renal replacement therapy). Analyses were by intention to treat. 129 patients were enrolled over 18 months. Severity of illness and serum creatinine (median 143 [IQR 88-203] vs 114 [91-175] micromol/L) were similar at baseline in the hydroxyethylstarch and gelatin groups. The frequencies of ARF (27/65 [42%] vs 15/64 [23%], p=0.028) and oliguria (35/62 [56%] vs 23/63 [37%], p=0.025) and the peak serum creatinine concentration (225 [130-339] vs 169 [106-273] micromol/L, p=0.04) were significantly higher in the hydroxyethylstarch group than in the gelatin group. In a multivariate analysis, risk factors for acute renal failure included mechanical ventilation (odds ratio 4.02 [95% CI 1.37-11.8], p=0.013) and use of hydroxyethylstarch (2.57 [1.13-5.83], p=0.026). The use of this preparation of hydroxyethylstarch as a plasma-volume expander is an independent risk factor for ARF in patients with severe sepsis or septic shock.