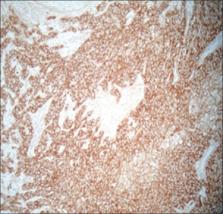 Oral squamous cell carcinoma (OSCC) accounts for more than 90% of all oral cancers. Epidermal growth factor receptor (EGFR) dysregulation is associated with essentially all of the key features of cancer. Tissue microarrays (TMAs) allow the simultaneous analysis of many tumours using small-diameter cores sampled from larger blocks of tissue. Hence present study was taken up to validate TMA technology.

To analyse and compare the immunohistochemical (IHC) expression of EGFR in OSCC using TMA technology and in whole tissue sections.

EGFR expression was seen in 61.8% of whole section cases. In TMA out of 102 cores 75.50 % of the disks were confirmed to represent an adequate amount of tumor tissue. In TMA 48.5% cases showed EGFR expression.The EGFR expression of whole.

Some OSCC express high EGFR and this expression may be an independent Wfactor of certain clinico-pathological variables. TMA may be used as an adjunct with conventional method of evaluation of OSCC especially in larger sample sized studies keeping in mind its limitations.

The burden of cancers and their variations across the states of India: the Global Burden of Disease Study 1990–2016

Preet Dhillon,  Prashant Mathur,  A Nandakumar … (2018)
Summary Background Previous efforts to report estimates of cancer incidence and mortality in India and its different parts include the National Cancer Registry Programme Reports, Sample Registration System cause of death findings, Cancer Incidence in Five Continents Series, and GLOBOCAN. We present a comprehensive picture of the patterns and time trends of the burden of total cancer and specific cancer types in each state of India estimated as part of the Global Burden of Diseases, Injuries, and Risk Factors Study (GBD) 2016 because such a systematic compilation is not readily available. Methods We used all accessible data from multiple sources, including 42 population-based cancer registries and the nationwide Sample Registration System of India, to estimate the incidence of 28 types of cancer in every state of India from 1990 to 2016 and the deaths and disability-adjusted life-years (DALYs) caused by them, as part of GBD 2016. We present incidence, DALYs, and death rates for all cancers together, and the trends of all types of cancers, highlighting the heterogeneity in the burden of specific types of cancers across the states of India. We also present the contribution of major risk factors to cancer DALYs in India. Findings 8·3% (95% uncertainty interval [UI] 7·9–8·6) of the total deaths and 5·0% (4·6–5·5) of the total DALYs in India in 2016 were due to cancer, which was double the contribution of cancer in 1990. However, the age-standardised incidence rate of cancer did not change substantially during this period. The age-standardised cancer DALY rate had a 2·6 times variation across the states of India in 2016. The ten cancers responsible for the highest proportion of cancer DALYs in India in 2016 were stomach (9·0% of the total cancer DALYs), breast (8·2%), lung (7·5%), lip and oral cavity (7·2%), pharynx other than nasopharynx (6·8%), colon and rectum (5·8%), leukaemia (5·2%), cervical (5·2%), oesophageal (4·3%), and brain and nervous system (3·5%) cancer. Among these cancers, the age-standardised incidence rate of breast cancer increased significantly by 40·7% (95% UI 7·0–85·6) from 1990 to 2016, whereas it decreased for stomach (39·7%; 34·3–44·0), lip and oral cavity (6·4%; 0·4–18·6), cervical (39·7%; 26·5–57·3), and oesophageal cancer (31·2%; 27·9–34·9), and leukaemia (16·1%; 4·3–24·2). We found substantial inter-state heterogeneity in the age-standardised incidence rate of the different types of cancers in 2016, with a 3·3 times to 11·6 times variation for the four most frequent cancers (lip and oral, breast, lung, and stomach). Tobacco use was the leading risk factor for cancers in India to which the highest proportion (10·9%) of cancer DALYs could be attributed in 2016. Interpretation The substantial heterogeneity in the state-level incidence rate and health loss trends of the different types of cancer in India over this 26-year period should be taken into account to strengthen infrastructure and human resources for cancer prevention and control at both the national and state levels. These efforts should focus on the ten cancers contributing the highest DALYs in India, including cancers of the stomach, lung, pharynx other than nasopharynx, colon and rectum, leukaemia, oesophageal, and brain and nervous system, in addition to breast, lip and oral cavity, and cervical cancer, which are currently the focus of screening and early detection programmes. Funding Bill & Melinda Gates Foundation; and Indian Council of Medical Research, Department of Health Research, Ministry of Health and Family Welfare, Government of India.

Manuel Salto-Tellez,  Elaine Dias do Carmo,  T Putti … (2002)
Tissue microarrays allow high throughput molecular profiling of diagnostic or predictive markers in cancer specimens and rapid validation of novel potential candidates identified from genomic and proteomic analyses in a large number of tumor samples. To validate the use of tissue microarray technology for all the main biomarkers routinely used to decide breast cancer prognostication and postsurgical adjuvant therapy, we constructed a tissue microarray from 97 breast tumors, with a single 0.6 mm core per specimen. Immunostaining of tissue microarray sections and conventional full sections of each tumor were performed using well-characterized prognostic markers (estrogen receptor ER, progesterone receptor PR and c-erbB2). The full section versus tissue microarray concordance for these stains was 97% for ER, 98% for PR, and 97% for c-erbB2, respectively, with a strong statistical association (kappa value more than 0.90). Fluorescence in situ hybridization analysis for HER-2/neu gene amplification from the single-core tissue microarray was technically successful in about 90% (87/97) of the cases, with a concordance of 95% compared with parallel analyses with the full sections. The correlation with other pathological parameters was not significantly different between full-section and array-based results. It is concluded that the constructed tissue microarray with a single core per specimen ensures full biological representativeness to identify the associations between biomarkers and clinicopathological parameters, with no significant associated sampling bias.