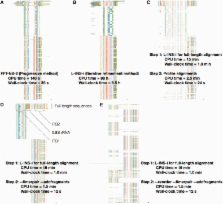 We report a major update of the MAFFT multiple sequence alignment program. This version has several new features, including options for adding unaligned sequences into an existing alignment, adjustment of direction in nucleotide alignment, constrained alignment and parallel processing, which were implemented after the previous major update. This report shows actual examples to explain how these features work, alone and in combination. Some examples incorrectly aligned by MAFFT are also shown to clarify its limitations. We discuss how to avoid misalignments, and our ongoing efforts to overcome such limitations.

K Katoh (2002)
A multiple sequence alignment program, MAFFT, has been developed. The CPU time is drastically reduced as compared with existing methods. MAFFT includes two novel techniques. (i) Homo logous regions are rapidly identified by the fast Fourier transform (FFT), in which an amino acid sequence is converted to a sequence composed of volume and polarity values of each amino acid residue. (ii) We propose a simplified scoring system that performs well for reducing CPU time and increasing the accuracy of alignments even for sequences having large insertions or extensions as well as distantly related sequences of similar length. Two different heuristics, the progressive method (FFT-NS-2) and the iterative refinement method (FFT-NS-i), are implemented in MAFFT. The performances of FFT-NS-2 and FFT-NS-i were compared with other methods by computer simulations and benchmark tests; the CPU time of FFT-NS-2 is drastically reduced as compared with CLUSTALW with comparable accuracy. FFT-NS-i is over 100 times faster than T-COFFEE, when the number of input sequences exceeds 60, without sacrificing the accuracy.