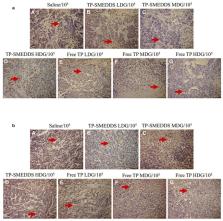 Methods: The medium chain triglyceride (MCT) was selected as oil phase; polyoxyethylene castor oil (EL) was selected as surfactant, and PEG-400 was selected as cosurfactant. The mass ratio of each phase was optimized by central composite design and response surface methodology to prepare TP-SMEDDS (self-microemulsifying drug delivery system). The quality of TP-SMEDDS was evaluated, and its inhibitory effect on tumor growth investigated in nude mice transplanted with MGC80-3 cells.

Results: The final prescription process was defined as follows: MCT mass ratio: 25.3%; EL mass ratio: 49.6%; PEG-400 mass ratio: 25.1%. The prepared TP-SMEDDS was a transparent liquid with a clear appearance (the theoretical particle size: 31.168 nm). On transmission electron microscopy, the microemulsion particles were spherical in size and uniformly distributed without adhesions. The in vitro release experiment showed complete release of the prepared TP-SMEDDS in PBS solution in 6 h. In vivo antitumor activity showed its inhibitory effect in the xenograft model.

Conclusion: The self-microemulsifying delivery system improved the oral bioavailability and the in vivo antitumor effect of TP.

Triptolide inhibits the growth and metastasis of solid tumors.

Fang Pei,  LURONG ZHANG,  S. Yang … (2002)
Triptolide (TPL), a diterpenoid triepoxide purified from the Chinese herb Tripterygium wilfordii Hook F, was tested for its antitumor properties in several model systems. In vitro, TPL inhibited the proliferation and colony formation of tumor cells at extremely low concentrations (2-10 ng/ml) and was more potent than Taxol. Likewise, in vivo, treatment of mice with TPL for 2-3 weeks inhibited the growth of xenografts formed by four different tumor cell lines (B16 melanoma, MDA-435 breast cancer, TSU bladder cancer, and MGC80-3 gastric carcinoma), indicating that TPL has a broad spectrum of activity against tumors that contain both wild-type and mutant forms of p53. In addition, TPL inhibited experimental metastasis of B16F10 cells to the lungs and spleens of mice. The antitumor effect of TPL was comparable or superior with that of conventional antitumor drugs, such as Adriamycin, mitomycin, and cisplatin. Importantly, tumor cells that were resistant to Taxol attributable to the overexpression of the multidrug resistant gene 1 were still sensitive to the effects of TPL. Studies on cultured tumor cells revealed that TPL induced apoptosis and reduced the expression of several molecules that regulate the cell cycle. Taken together, these results suggest that TPL has several attractive features as a new antitumor agent.

Amita K Joshi,  Shambhu Dokania (2015)
Self-microemulsifying drug delivery system (SMEDDS) has emerged as a vital strategy to formulate poor water soluble compounds for bioavailability enhancement. However, certain limitations are associated with SMEDDS formulations which include in vivo drug precipitation, formulation handling issues, limited lymphatic uptake, lack of predictive in vitro tests and oxidation of unsaturated fatty acids. These limitations restrict their potential usage. Inclusion of polymers or precipitation inhibitors within lipid based formulations helps to maintain drug supersaturation after dispersion. This, thereby, improves the bioavailability and reduces the variability on exposure. Also, formulating solid SMEDDS helps to overcome liquid handling and stability problems. Usage of medium chain triglycerides (MCT) and suitable antioxidants to minimize oxidation of unsaturated fatty acids are few of the steps to overcome the limitations associated with SMEDDS. The review discussed here, in detail, the limitations of SMEDDS and suitable measures that can be taken to overcome them.

This article was submitted to Pharmacology of Anti-Cancer Drugs, a section of the journal Frontiers in Oncology