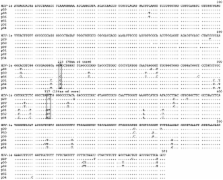 The biological role of the protein encoded by the alternative open reading frame (core+1/ARF) of the Hepatitis C virus (HCV) genome remains elusive, as does the significance of the production of corresponding antibodies in HCV infection. We investigated the prevalence of anti-core and anti-core+1/ARFP antibodies in HCV-positive blood donors from Cambodia, using peptide and recombinant protein-based ELISAs. We detected unusual serological profiles in 3 out of 58 HCV positive plasma of genotype 1a. These patients were negative for anti-core antibodies by commercial and peptide-based assays using C-terminal fragments of core but reacted by Western Blot with full-length core protein. All three patients had high levels of anti-core+1/ARFP antibodies. Cloning of the cDNA that corresponds to the core-coding region from these sera resulted in the expression of both core and core+1/ARFP in mammalian cells. The core protein exhibited high amino-acid homology with a consensus HCV1a sequence. However, 10 identical synonymous mutations were found, and 7 were located in the aa(99–124) region of core. All mutations concerned the third base of a codon, and 5/10 represented a T>C mutation. Prediction analyses of the RNA secondary structure revealed conformational changes within the stem-loop region that contains the core+1/ARFP internal AUG initiator at position 85/87. Using the luciferase tagging approach, we showed that core+1/ARFP expression is more efficient from such a sequence than from the prototype HCV1a RNA. We provide additional evidence of the existence of core+1/ARFP in vivo and new data concerning expression of HCV core protein. We show that HCV patients who do not produce normal anti-core antibodies have unusually high levels of antit-core+1/ARFP and harbour several identical synonymous mutations in the core and core+1/ARFP coding region that result in major changes in predicted RNA structure. Such HCV variants may favour core+1/ARFP production during HCV infection.

A Hidden Markov Model approach to variation among sites in rate of evolution.

J Felsenstein,  G Churchill (1995)
The method of Hidden Markov Models is used to allow for unequal and unknown evolutionary rates at different sites in molecular sequences. Rates of evolution at different sites are assumed to be drawn from a set of possible rates, with a finite number of possibilities. The overall likelihood of phylogeny is calculated as a sum of terms, each term being the probability of the data given a particular assignment of rates to sites, times the prior probability of that particular combination of rates. The probabilities of different rate combinations are specified by a stationary Markov chain that assigns rate categories to sites. While there will be a very large number of possible ways of assigning rates to sites, a simple recursive algorithm allows the contributions to the likelihood from all possible combinations of rates to be summed, in a time proportional to the number of different rates at a single site. Thus with three rates, the effort involved is no greater than three times that for a single rate. This "Hidden Markov Model" method allows for rates to differ between sites and for correlations between the rates of neighboring sites. By summing over all possibilities it does not require us to know the rates at individual sites. However, it does not allow for correlation of rates at nonadjacent sites, nor does it allow for a continuous distribution of rates over sites. It is shown how to use the Newton-Raphson method to estimate branch lengths of a phylogeny and to infer from a phylogeny what assignment of rates to sites has the largest posterior probability. An example is given using beta-hemoglobin DNA sequences in eight mammal species; the regions of high and low evolutionary rates are inferred and also the average length of patches of similar rates.

Evidence for a functional RNA element in the hepatitis C virus core gene.

Kathleen B. Mihalik,  Laura K. McMullan,  Stephen Feinstone … (2007)
In the core protein-coding region of hepatitis C virus (HCV), evidence exists for both phylogenetically conserved RNA structures and a +1 alternative reading frame (ARF). To investigate its role in HCV infection, we introduced four stop codons into the ARF of a genotype 1a H77 molecular clone. The changes did not alter the core protein sequence, but were predicted to disrupt RNA secondary structures. An attenuated infection was established after inoculation of the mutant HCV RNA into an HCV naïve chimpanzee. The acute infection was atypical with low peak viremia, minimal alanine aminotransferase elevation, and early virus control by a diverse adaptive immune response. Sequencing circulating virus revealed progressive reversions at the third and then fourth stop codon. In cell culture, RNA replication of a genome with four stop codons was severely impaired. In contrast, the revertant genome exhibited only a 5-fold reduction in replication. Genomes harboring only the first two stop codons replicated to WT levels. Similarly, reversions at stop codons 3 and 4, which improved replication, were selected with recombinant, infectious HCV in cell culture. We conclude that ARF-encoded proteins initiating at the polyprotein AUG are not essential for HCV replication in cell culture or in vivo. Rather, our results provide evidence for a functionally important RNA element in the ARF region.

Publisher ID: PONE-D-10-01202
DOI: 10.1371/journal.pone.0015871
PMC ID: 3017048
PubMed ID: 21283512
Copyright statement: Budkowska et al. This is an open-access article distributed under the terms of the Creative Commons Attribution License, which permits unrestricted use, distribution, and reproduction in any medium, provided the original author and source are credited.