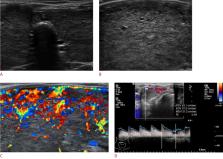 Doppler ultrasonography (US) is widely used for the differential diagnosis of thyroid nodules, metastatic cervical lymph nodes in patients with thyroid cancer, and diffuse parenchymal disease, as well as for guidance in various US-guided procedures, including biopsy and ablation. However, controversies remain regarding the appropriate use and interpretation of Doppler US. Therefore, the Korean Society of Thyroid Radiology organized a taskforce to develop a consensus statement on the clinical use of Doppler US for thyroid disease. The review and recommendations in this article are based on a comprehensive analysis of the current literature and the consensus of experts.

Francesco Nardi,  Claudio Pacella,  Rinaldo Guglielmi … (2002)
The aim of the study was to correlate the sonographic [ultrasound (US)] and color-Doppler (CFD) findings with the results of US-guided fine needle aspiration biopsy (FNA) and of pathologic staging of resected carcinomas to establish: 1) the relative importance of US features as risk factors of malignancy; and 2) a cost-effective management of nonpalpable thyroid nodules. Four hundred ninety-four consecutive patients with nonpalpable thyroid nodules (8-15 mm) were evaluated by US, CFD, and US-FNA. Ninety-two patients with inadequate cytology were excluded from the study. All patients with suspicious or malignant cytology underwent surgery, whereas subjects with benign cytology had clinical and US control 6 months later. Thyroid malignancies were observed in 18 of 195 (9.2%) solitary thyroid nodules and in 13 of 207 (6.3%) multinodular goiters. Cancer prevalence was similar in nodules greater or smaller than 10 mm (9.1 vs. 7.0%). Extracapsular growth (pT(4)) was present in 35.5%, and nodal involvement in 19.4% of neoplastic lesions, with no significant differences between tumors greater or smaller than 10 mm. At US cancers presented a solid hypoechoic appearance in 87% of cases, irregular or blurred margins in 77.4%, an intranodular vascular pattern in 74.2%, and microcalcifications in 29.0%. Irregular margins (RR 16.83), intranodular vascular spots (RR 14.29), and microcalcifications (RR 4.97) were independent risk factors of malignancy. FNA performed on hypoechoic nodules with at least one risk factor was able to identify 87% of the cancers at the expence of cytological evaluation of 38.4% of nonpalpable lesions. The majority of nonpalpable thyroid tumors can be identified by cytological evaluation of lesions presenting hypoechoic appearance in conjunction with one independent risk factor. Due to the nonnegligible prevalence of extracapsular growth and nodal metastasis, US-FNA should be performed on all 8-15 mm hypoechoic nodules with irregular margins, intranodular vascular spots or microcalcifications. Nonpalpable lesions of the thyroid without risk factors should be followed by means of clinical and US evaluation.

Y. Kim,  Jee Jeong,  Woo Kyoung Jeong … (2008)
This study evaluated the safety and volume reduction of ultrasonography (US)-guided radiofrequency ablation (RFA) for benign thyroid nodules, and the factors affecting the results obtained. A total of 302 benign thyroid nodules in 236 euthyroid patients underwent RFA between June 2002 and January 2005. RFA was carried out using an internally cooled electrode under local anesthesia. The volume-reduction ratio (VRR) was assessed by US and safety was determined by observing the complications during the follow-up period (1-41 months). The correlation between the VRR and several factors (patient age, volume and composition of the index nodule) was evaluated. The volume of index nodules was 0.11-95.61 ml (mean, 6.13 +/- 9.59 ml). After ablation, the volume of index nodules decreased to 0.00-26.07 ml (mean, 1.12 +/- 2.92 ml) and the VRR was 12.52-100% (mean, 84.11 +/- 14.93%) at the last follow-up. A VRR greater than 50% was observed in 91.06% of nodules, and 27.81% of index nodules disappeared. The complications encountered were pain, hematoma and transient voice changes. In conclusion, RFA is a safe modality effective at reducing volume in benign thyroid nodules.