Ross, Macdonald, and a Theory for the Dynamics and Control of Mosquito-Transmitted Pathogens 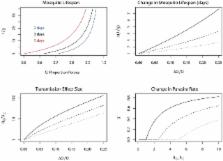 Diseases of humans and their domestic mammals: pathogen characteristics, host range and the risk of emergence.

K Laurenson,  Yan C. S. M. Laurenson,  S. Cleaveland … (2001)
Pathogens that can be transmitted between different host species are of fundamental interest and importance from public health, conservation and economic perspectives, yet systematic quantification of these pathogens is lacking. Here, pathogen characteristics, host range and risk factors determining disease emergence were analysed by constructing a database of disease-causing pathogens of humans and domestic mammals. The database consisted of 1415 pathogens causing disease in humans, 616 in livestock and 374 in domestic carnivores. Multihost pathogens were very prevalent among human pathogens (61.6%) and even more so among domestic mammal pathogens (livestock 77.3%, carnivores 90.0%). Pathogens able to infect human, domestic and wildlife hosts contained a similar proportion of disease-causing pathogens for all three host groups. One hundred and ninety-six pathogens were associated with emerging diseases, 175 in humans, 29 in livestock and 12 in domestic carnivores. Across all these groups, helminths and fungi were relatively unlikely to emerge whereas viruses, particularly RNA viruses, were highly likely to emerge. The ability of a pathogen to infect multiple hosts, particularly hosts in other taxonomic orders or wildlife, were also risk factors for emergence in human and livestock pathogens. There is clearly a need to understand the dynamics of infectious diseases in complex multihost communities in order to mitigate disease threats to public health, livestock economies and wildlife.

Statics and dynamics of malaria infection in Anopheles mosquitoes

David Smith,  F Ellis McKenzie (2004)
The classic formulae in malaria epidemiology are reviewed that relate entomological parameters to malaria transmission, including mosquito survivorship and age-at-infection, the stability index (S), the human blood index (HBI), proportion of infected mosquitoes, the sporozoite rate, the entomological inoculation rate (EIR), vectorial capacity (C) and the basic reproductive number (R 0). The synthesis emphasizes the relationships among classic formulae and reformulates a simple dynamic model for the proportion of infected humans. The classic formulae are related to formulae from cyclical feeding models, and some inconsistencies are noted. The classic formulae are used to to illustrate how malaria control reduces malaria transmission and show that increased mosquito mortality has an effect even larger than was proposed by Macdonald in the 1950's.

Publisher ID: PPATHOGENS-D-11-02708
DOI: 10.1371/journal.ppat.1002588
PMC ID: 3320609
PubMed ID: 22496640
Copyright statement: This is an open-access article, free of all copyright, and may be freely reproduced, distributed, transmitted, modified, built upon, or otherwise used by anyone for any lawful purpose. The work is made available under the Creative Commons CC0 public domain dedication.