Regulation of Antibiotic Production by Signaling Molecules in Streptomyces 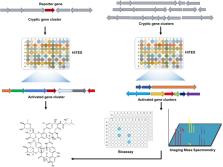 Genomic basis for natural product biosynthetic diversity in the actinomycetes.

Huarong Tan,  Gang Liu,  Guoqing Niu … (2013)
Streptomycetes are the most abundant source of antibiotics. Typically, each species produces several antibiotics, with the profile being species specific. Streptomyces coelicolor, the model species, produces at least five different antibiotics. We review the regulation of antibiotic biosynthesis in S. coelicolor and other, nonmodel streptomycetes in the light of recent studies. The biosynthesis of each antibiotic is specified by a large gene cluster, usually including regulatory genes (cluster-situated regulators [CSRs]). These are the main point of connection with a plethora of generally conserved regulatory systems that monitor the organism's physiology, developmental state, population density, and environment to determine the onset and level of production of each antibiotic. Some CSRs may also be sensitive to the levels of different kinds of ligands, including products of the pathway itself, products of other antibiotic pathways in the same organism, and specialized regulatory small molecules such as gamma-butyrolactones. These interactions can result in self-reinforcing feed-forward circuitry and complex cross talk between pathways. The physiological signals and regulatory mechanisms may be of practical importance for the activation of the many cryptic secondary metabolic gene cluster pathways revealed by recent sequencing of numerous Streptomyces genomes.

High-throughput platform for the discovery of elicitors of silent bacterial gene clusters.

Mohammad Seyedsayamdost (2014)
Over the past decade, bacterial genome sequences have revealed an immense reservoir of biosynthetic gene clusters, sets of contiguous genes that have the potential to produce drugs or drug-like molecules. However, the majority of these gene clusters appear to be inactive for unknown reasons prompting terms such as "cryptic" or "silent" to describe them. Because natural products have been a major source of therapeutic molecules, methods that rationally activate these silent clusters would have a profound impact on drug discovery. Herein, a new strategy is outlined for awakening silent gene clusters using small molecule elicitors. In this method, a genetic reporter construct affords a facile read-out for activation of the silent cluster of interest, while high-throughput screening of small molecule libraries provides potential inducers. This approach was applied to two cryptic gene clusters in the pathogenic model Burkholderia thailandensis. The results not only demonstrate a prominent activation of these two clusters, but also reveal that the majority of elicitors are themselves antibiotics, most in common clinical use. Antibiotics, which kill B. thailandensis at high concentrations, act as inducers of secondary metabolism at low concentrations. One of these antibiotics, trimethoprim, served as a global activator of secondary metabolism by inducing at least five biosynthetic pathways. Further application of this strategy promises to uncover the regulatory networks that activate silent gene clusters while at the same time providing access to the vast array of cryptic molecules found in bacteria.

This article was submitted to Antimicrobials, Resistance and Chemotherapy, a section of the journal Frontiers in Microbiology