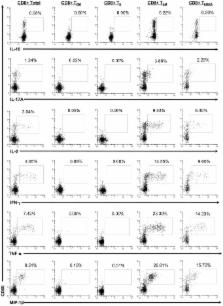 Salmonella enterica serovar Typhi ( S. Typhi), the causative agent of typhoid fever, continues to cause significant morbidity and mortality world-wide. CD8+ T cells are an important component of the cell mediated immune (CMI) response against S. Typhi. Recently, interleukin (IL)-17A has been shown to contribute to mucosal immunity and protection against intracellular pathogens. To investigate multifunctional IL-17A responses against S. Typhi antigens in T memory subsets, we developed multiparametric flow cytometry methods to detect up to 6 cytokines/chemokines (IL-10, IL-17A, IL-2, interferon-γ (IFN-γ), tumor necrosis factor-α (TNF-α) and macrophage inflammatory protein-1β (MIP-1β)) simultaneously. Five volunteers were immunized with a 4 dose regimen of live-attenuated S. Typhi vaccine (Ty21a), peripheral blood mononuclear cells (PBMC) were isolated before and at 11 time points after immunization, and CMI responses were evaluated. Of the 5 immunized volunteers studied, 3 produced detectable CD8+ T cell responses following stimulation with S. Typhi-infected autologous B lymphoblastoid cell lines (B-LCL). Additionally, 2 volunteers had detectable levels of intracellular cytokines in response to stimulation with S. Typhi-infected HLA-E restricted cells. Although the kinetics of the responses differed among volunteers, all of the responses were bi- or tri-phasic and included multifunctional CD8+ T cells. Virtually all of the IL-17A detected was derived from multifunctional CD8+ T cells. The presence of these multifunctional IL-17A+ CD8+ T cells was confirmed using an unsupervised analysis program, flow cytometry clustering without K (FLOCK). This is the first report of IL-17A production in response to S. Typhi in humans, indicating the presence of a Tc17 response which may be important in protection. The presence of IL-17A in multifunctional cells co-producing Tc1 cytokines (IL-2, IFN-γ and TNF-α) may also indicate that the distinction between Tc17 and Tc1 responses in humans is not as clearly delineated as suggested by in vitro experiments and animal models.

Federica Sallusto,  Antonio Lanzavecchia,  Jens Geginat (2003)
The memory T cell pool functions as a dynamic repository of antigen-experienced T lymphocytes that accumulate over the lifetime of the individual. Recent studies indicate that memory T lymphocytes contain distinct populations of central memory (TCM) and effector memory (TEM) cells characterized by distinct homing capacity and effector function. This review addresses the heterogeneity of TCM and TEM, their differentiation stages, and the current models for their generation and maintenance in humans and mice.

Dan Flynn,  R. Reed,  Mario Roederer … (2007)
CD4+ T cells have a crucial role in mediating protection against a variety of pathogens through production of specific cytokines. However, substantial heterogeneity in CD4+ T-cell cytokine responses has limited the ability to define an immune correlate of protection after vaccination. Here, using multiparameter flow cytometry to assess the immune responses after immunization, we show that the degree of protection against Leishmania major infection in mice is predicted by the frequency of CD4+ T cells simultaneously producing interferon-gamma, interleukin-2 and tumor necrosis factor. Notably, multifunctional effector cells generated by all vaccines tested are unique in their capacity to produce high amounts of interferon-gamma. These data show that the quality of a CD4+ T-cell cytokine response can be a crucial determinant in whether a vaccine is protective, and may provide a new and useful prospective immune correlate of protection for vaccines based on T-helper type 1 (TH1) cells.

Francesco Annunziato,  Lorenzo Cosmi,  Veronica Santarlasci … (2007)
T helper (Th) 17 cells represent a novel subset of CD4+ T cells that are protective against extracellular microbes, but are responsible for autoimmune disorders in mice. However, their properties in humans are only partially known. We demonstrate the presence of Th17 cells, some of which produce both interleukin (IL)-17 and interferon (IFN)-γ (Th17/Th1), in the gut of patients with Crohn's disease. Both Th17 and Th17/Th1 clones showed selective expression of IL-23R, CCR6, and the transcription factor RORγt, and they exhibited similar functional features, such as the ability to help B cells, low cytotoxicity, and poor susceptibility to regulation by autologous regulatory T cells. Interestingly, these subsets also expressed the Th1-transcription factor T-bet, and stimulation of these cells in the presence of IL-12 down-regulated the expression of RORγt and the production of IL-17, but induced IFN-γ. These effects were partially inhibited in presence of IL-23. Similar receptor expression and functional capabilities were observed in freshly derived IL-17–producing peripheral blood and tonsillar CD4+ T cells. The demonstration of selective markers for human Th17 cells may help us to understand their pathogenic role. Moreover, the identification of a subset of cells sharing features of both Th1 and Th17, which can arise from the modulation of Th17 cells by IL-12, may raise new issues concerning developmental and/or functional relationships between Th17 and Th1.

Publisher ID: PONE-D-12-07251
DOI: 10.1371/journal.pone.0038408
PMC ID: 3367967
PubMed ID: 22679502
Copyright statement: McArthur, Sztein. This is an open-access article distributed under the terms of the Creative Commons Attribution License, which permits unrestricted use, distribution, and reproduction in any medium, provided the original author and source are credited.