In Vivo Sub-chronic Treatment with Dichlorvos in Young Rats Promotes Synaptic Plasticity and Learning by a Mechanism that Involves Acylpeptide Hydrolase Instead of Acetylcholinesterase Inhibition. Correlation with Endogenous β-Amyloid Levels 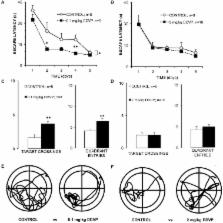 Acylpeptide hydrolase (APEH) is a serine hydrolase that displays two catalytic activities, acting both as an exopeptidase toward short N-acylated peptides and as an endopeptidase toward oxidized peptides or proteins. It has been demonstrated that this enzyme can degrade monomers, dimers, and trimers of the Aβ 1-40 peptide in the conditioned media of neuroblastoma cells. In a previous report, we showed that the specific inhibition of this enzyme by the organophosphate molecule dichlorvos (DDVP) triggers an enhancement of long-term potentiation in rat hippocampal slices. In this study, we demonstrate that the same effect can be accomplished in vivo by sub-chronic treatment of young rats with a low dose of DDVP (0.1 mg/kg). Besides exhibiting a significant enhancement of LTP, the treated animals also showed improvements in parameters of spatial learning and memory. Interestingly, higher doses of DDVP such as 2 mg/kg did not prove to be beneficial for synaptic plasticity or behavior. Due to the fact that at 2 mg/kg we observed inhibition of both APEH and acetylcholinesterase, we interpret that in order to achieve positive effects on the measured parameters only APEH inhibition should be obtained. The treatment with both DDVP doses produced an increase in the endogenous concentration of Aβ 1-40, although this was statistically significant only at the dose of 0.1 mg/kg. We propose that APEH represents an interesting pharmacological target for cognitive enhancement, acting through the modulation of the endogenous concentration of Aβ 1-40.

T Bliss,  Laurence S. Cooke (2006)
Long-term potentiation (LTP) is a well-characterized form of synaptic plasticity that fulfils many of the criteria for a neural correlate of memory. LTP has been studied in a variety of animal models and, in rodents in particular, there is now a strong body of evidence demonstrating common underlying molecular mechanisms in LTP and memory. Results are beginning to emerge from studies of neural plasticity in humans. This review will summarize findings demonstrating that synaptic LTP can be induced in human CNS tissue and that rodent and human LTP probably share similar molecular mechanisms. We will also discuss the application of non-invasive stimulation techniques to awake human subjects to induce LTP-like long-lasting changes in localized neural activity. These techniques have potential therapeutic application in manipulating neural plasticity to treat a variety of conditions, including depression, Parkinson's disease, epilepsy and neuropathic pain.

Endocytosis is required for synaptic activity-dependent release of amyloid-beta in vivo.

Myoung Jae Kang,  J Cirrito,  Bob R. Stewart … (2008)
Aggregation of amyloid-beta (Abeta) peptide into soluble and insoluble forms within the brain extracellular space is central to the pathogenesis of Alzheimer's disease. Full-length amyloid precursor protein (APP) is endocytosed from the cell surface into endosomes where it is cleaved to produce Abeta. Abeta is subsequently released into the brain interstitial fluid (ISF). We hypothesized that synaptic transmission results in more APP endocytosis, thereby increasing Abeta generation and release into the ISF. We found that inhibition of clathrin-mediated endocytosis immediately lowers ISF Abeta levels in vivo. Two distinct methods that increased synaptic transmission resulted in an elevation of ISF Abeta levels. Inhibition of endocytosis, however, prevented the activity-dependent increase in Abeta. We estimate that approximately 70% of ISF Abeta arises from endocytosis-associated mechanisms, with the vast majority of this pool also dependent on synaptic activity. These findings have implications for AD pathogenesis and may provide insights into therapeutic intervention.

P Séguéla,  J Wadiche,  K Dineley-Miller … (1993)
A full-length clone coding for the rat alpha 7 nicotinic receptor subunit was isolated from an adult brain cDNA library and expressed in Xenopus oocytes. A significant proportion of the current through alpha 7-channels is carried by Ca2+. This Ca2+ influx then activates a Ca(2+)-dependent Cl- conductance, which is blocked by the chloride channel blockers niflumic and fluflenamic acid. Increasing the external NaCl concentration caused the reversal potentials for the alpha 7-channels and the Ca(2+)-dependent Cl- channels to be shifted in opposite directions. Under these conditions, agonist application activates a biphasic current with an initial inward current through alpha 7-channels followed by a niflumic acid- and fluflenamic acid-blockable outward current through Ca(2+)-dependent Cl- channels. A relative measure of the Ca2+ permeability was made by measuring the shift in the reversal potential caused by adding 10 mM Ca2+ to the external solution. Measurements made in the absence of Cl-, to avoid artifactual current through Ca(2+)-activated Cl- channels, indicate that alpha 7-homooligomeric channels have a greater relative Ca2+ permeability than the other nicotinic ACh receptors. Furthermore, alpha 7-channels have an even greater relative Ca2+ permeability than the NMDA subtype of glutamate receptors. High levels of alpha 7-transcripts were localized by in situ hybridization in the olfactory areas, the hippocampus, the hypothalamus, the amygdala, and the cerebral cortex. These results imply that alpha 7-containing receptors may play a role in activating calcium-dependent mechanisms in specific neuronal populations of the adult rat limbic system.