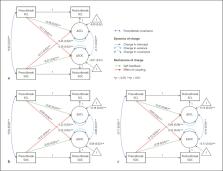 It is claimed that the coronavirus disease 2019 (COVID-19) pandemic has had a negative impact on mental health. However, to date, prospective studies are lacking. Moreover, it is important to identify which factors modulate the stress response to the pandemic. Previously, sense of coherence (SOC) has emerged as a particularly important resistance factor.

This prospective study aimed to assess the impact of the COVID-19 outbreak on mental health and to investigate the ability of pre-outbreak SOC levels to predict changes in psychopathological symptoms.

This study assessed psychopathological symptoms and SOC before and after the COVID-19 outbreak as well as post-outbreak COVID-19-related traumatic distress in a German-speaking sample ( n =1,591). Bivariate latent change score (BLCS) modeling was used to analyze pre- to post-outbreak changes in psychopathological symptoms and the ability of SOC to predict symptom changes.

Although mental health was stable in most respondents, a small group of respondents characterized by low levels of SOC experienced increased psychopathological symptoms from pre- to post-outbreak. Thus, SOC training might be a promising approach to enhance the resistance to stressors.

Longitudinal trajectories of depression and anxiety in a prospective community study: the Zurich Cohort Study.

Kathleen R Merikangas,  Jules Angst,  S Avenevoli … (2003)
The dearth of long-term follow-up studies of community-based samples and differences in methodology in existing studies highlight the need for research designed to examine the stability, comorbidity, and diagnostic thresholds of depression and anxiety in the community. Prospective study of a community-based cohort aged 19 and 20 years from the canton of Zurich, Switzerland. Semistructured diagnostic interviews were administered by clinically experienced interviewers at 5 assessment points during a 15-year period. The format of the interview permitted assessment of major mental disorders at both the diagnostic and subthreshold levels. Comorbid anxiety and depression tended to be far more persistent than either syndrome alone. Individuals with anxiety states alone tended to develop either depression alone or comorbid anxiety and depression as they progressed through adulthood. In contrast, depression alone and depression comorbid with anxiety tended to be more stable than anxiety alone over time. The patterns of stability were similar for subthreshold- and threshold-level disorders. These findings have important implications for classification and treatment of affective disorders. The greater stability of comorbid anxiety and depression than either disorder alone illustrates the importance of further investigation of comorbid states compared with noncomorbid states in etiologic and treatment research. The persistence of subthreshold-level depression and anxiety from early to mid adulthood also suggests the importance of characterizing the continuum of expression of depression and anxiety rather than adhering to strict diagnostic thresholds.

Ivan Mak,  Chung Chu,  Pey Pan … (2010)
Background Post-traumatic stress disorder (PTSD) is one of the most prevalent long-term psychiatric diagnoses among survivors of severe acute respiratory syndrome (SARS). Objectives The objective of this study was to identify the predictors of chronic PTSD in SARS survivors. Design PTSD at 30 months after the SARS outbreak was assessed by the Structured Clinical Interview for the DSM-IV. Survivors' demographic data, medical information and psychosocial variables were collected for risk factor analysis. Results Multivariate logistic regression analysis showed that female gender as well as the presence of chronic medical illnesses diagnosed before the onset of SARS and avascular necrosis were independent predictors of PTSD at 30 months post-SARS. Associated factors included higher-chance external locus of control, higher functional disability and higher average pain intensity. Conclusion The study of PTSD at 30 months post-SARS showed that the predictive value of acute medical variables may fade out. Our findings do not support some prior hypotheses that the use of high dose corticosteroids is protective against the development of PTSD. On the contrary, the adversity both before and after the SARS outbreak may be more important in hindering recovery from PTSD. The risk factor analysis can not only improve the detection of hidden psychiatric complications but also provide insight for the possible model of care delivery for the SARS survivors. With the complex interaction of the biopsychosocial challenges of SARS, an integrated multidisciplinary clinic setting may be a superior approach in the long-term management of complicated PTSD cases.

Some conceptual considerations on the sense of coherence.

S Geyer (1997)
Aaron Antonovsky's sense of coherence (SOC) [(1987) Unraveling the Mystery of Health, How People Manage Stress and Stay Well, Jossey-Bass, San Francisco] ought to explain why some people manage stress and stay well while others break down. According to Antonovsky's formulation, SOC is strongly developed if a person sees the world as comprehensible (i.e. rational, understandable, consistent and predictable), as manageable, and as meaningful (i.e. challenging and that things are worth making commitments for). Sense of coherence has gained widespread attention and has been used as an explanatory variable in many studies. This paper discusses some aspects that have not sufficiently been considered in the SOC literature. First, an outline of the construct is given. Next, overlaps and differences with other concepts in the same domain are discussed. Little empirical evidence concerning the stability of SOC is available. Therefore, findings from experimental social psychological studies on self-esteem are applied to SOC. Third, it can be assumed that SOC is an attitude of people who are well educated, are in rather privileged societal positions, and with opportunities for decision-making. Finally, the empirical basis is reviewed. Statistical relationships between SOC and symptoms/disease are in the predicted direction, but due to the simultaneous assessment of variables it is open to debate whether a low SOC has some effect on the probability of falling ill or whether it is the other way around. Very high negative correlations between SOC and depression/anxiety suggest that the instruments used may assess the same phenomenon, but with inverse signs. Based on these considerations, directions for further research are proposed.