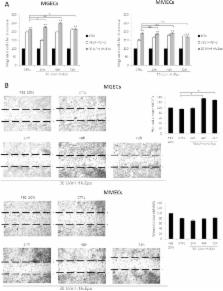 Increasing evidences suggest several biological roles for erythropoietin and its receptor (Epo and EpoR), unrelated to erythropoiesis, including angiogenesis. Here, we detected the expression of EpoR in bone marrow-derived endothelial cells from monoclonal gammopathy of undetermined significance (MGUS) and multiple myeloma (MM) patients (MGECs and MMECs, respectively) and assessed whether Epo plays a role in MGECs- and MMECs-mediated angiogenesis. We show that EpoR is expressed by both MGECs and MMECs even though at a higher level in the first ones. Both EC types respond to rHuEpo in terms of cell proliferation, whereas other responses, including activation of JAK2/STAT5 and PI3K/Akt pathways, cell migration and capillarogenesis are enhanced by Epo in MGECs, but not in MMECs. In addition, the conditioned media of both Epo-treated cells induce a strong angiogenic response in vivo in the chorioallantoic membrane assay, comparable to that of vascular endothelial growth factor (VEGF). Overall, these data highlight the effect of Epo on MGECs- and MMECs-mediated angiogenesis: MGECs are more responsive to Epo treatment than MMECs, probably because over-angiogenic phenotype of MMECs is already activated by their autocrine/paracrine loops occurring in the “angiogenic switch” from MGUS.

Treatment of stroke with erythropoietin enhances neurogenesis and angiogenesis and improves neurological function in rats.

Michael Chopp,  Lei Wang,  Ying Wang … (2004)
Erythropoietin (EPO) promotes proliferation and differentiation of erythroid progenitors and the survival of maturing erythroid cells. Here, we investigated the role of EPO in brain repair after stroke. Rats were treated with recombinant human EPO (rhEPO) at 24 hours after the onset of embolic stroke. An array of behavior tests was performed. Rats were euthanized 28 days after stroke for measurements of infarct volume, angiogenesis, and neurogenesis. In vitro, neurospheres derived from the subventricular zone (SVZ) of the rat and cerebral endothelial cells derived from the mouse were treated with rhEPO. Capillary-like tube formation and neuronal differentiation were measured. Treatment with rhEPO significantly improved functional recovery, along with increases in density of cerebral microvessels at the stroke boundary and numbers of BrdU, doublecortin, and nestin immunoreactive cells in the SVZ. rhEPO treatment significantly increased brain levels of vascular endothelial growth factor (VEGF) and brain-derived neurotrophic factor (BDNF). In vitro, rhEPO enhanced capillary tube formation of cerebral endothelial cells, which was inhibited by a specific VEGF receptor 2 antagonist (SU1498). Incubation of neurospheres derived from stroke SVZ with anti-EPO neutralizing antibody inhibited neurogenesis, whereas incubation of stroke-derived neurospheres with rhEPO enhanced neurogenesis. Our data suggest that EPO-increased VEGF and BDNF may be involved in angiogenesis and neurogenesis, which could contribute to functional recovery.