Overview of the Structure–Function Relationships of Mannose-Specific Lectins from Plants, Algae and Fungi 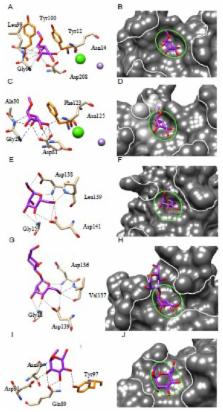 Isolation and characterization of griffithsin, a novel HIV-inactivating protein, from the red alga Griffithsia sp.

R Gardella,  Alex R. Boyd,  Raymond C Sowder … (2005)
Griffithsin (GRFT), a novel anti-HIV protein, was isolated from an aqueous extract of the red alga Griffithsia sp. The 121-amino acid sequence of GRFT has been determined, and biologically active GRFT was subsequently produced by expression of a corresponding DNA sequence in Escherichia coli. Both native and recombinant GRFT displayed potent antiviral activity against laboratory strains and primary isolates of T- and M- tropic HIV-1 with EC50 values ranging from 0.043 to 0.63 nM. GRFT also aborted cell-to-cell fusion and transmission of HIV-1 infection at similar concentrations. High concentrations (e.g. 783 nM) of GRFT were not lethal to any tested host cell types. GRFT blocked CD4-dependent glycoprotein (gp) 120 binding to receptor-expressing cells and bound to viral coat glycoproteins (gp120, gp41, and gp160) in a glycosylation-dependent manner. GRFT preferentially inhibited gp120 binding of the monoclonal antibody (mAb) 2G12, which recognizes a carbohydrate-dependent motif, and the (mAb) 48d, which binds to CD4-induced epitope. In addition, GRFT moderately interfered with the binding of gp120 to sCD4. Further data showed that the binding of GRFT to soluble gp120 was inhibited by the monosaccharides glucose, mannose, and N-acetylglucosamine but not by galactose, xylose, fucose, N-acetylgalactosamine, or sialic acid-containing glycoproteins. Taken together these data suggest that GRFT is a new type of lectin that binds to various viral glycoproteins in a monosaccharide-dependent manner. GRFT could be a potential candidate microbicide to prevent the sexual transmission of HIV and AIDS.

Natasza E. Ziółkowska,  Barry O'Keefe,  Toshiyuki Mori … (2006)
Summary The crystal structure of griffithsin, an antiviral lectin from the red alga Griffithsia sp., was solved and refined at 1.3 Å resolution for the free protein and 0.94 Å for a complex with mannose. Griffithsin molecules form a domain-swapped dimer, in which two β strands of one molecule complete a β prism consisting of three four-stranded sheets, with an approximate 3-fold axis, of another molecule. The structure of each monomer bears close resemblance to jacalin-related lectins, but its dimeric structure is unique. The structures of complexes of griffithsin with mannose and N-acetylglucosamine defined the locations of three almost identical carbohydrate binding sites on each monomer. We have also shown that griffithsin is a potent inhibitor of the coronavirus responsible for severe acute respiratory syndrome (SARS). Antiviral potency of griffithsin is likely due to the presence of multiple, similar sugar binding sites that provide redundant attachment points for complex carbohydrate molecules present on viral envelopes.

A lectin isolated from bananas is a potent inhibitor of HIV replication.

David M Markovitz,  D. C. Winter,  K Swanson … (2010)
BanLec is a jacalin-related lectin isolated from the fruit of bananas, Musa acuminata. This lectin binds to high mannose carbohydrate structures, including those found on viruses containing glycosylated envelope proteins such as human immunodeficiency virus type-1 (HIV-1). Therefore, we hypothesized that BanLec might inhibit HIV-1 through binding of the glycosylated HIV-1 envelope protein, gp120. We determined that BanLec inhibits primary and laboratory-adapted HIV-1 isolates of different tropisms and subtypes. BanLec possesses potent anti-HIV activity, with IC(50) values in the low nanomolar to picomolar range. The mechanism for BanLec-mediated antiviral activity was investigated by determining if this lectin can directly bind the HIV-1 envelope protein and block entry of the virus into the cell. An enzyme-linked immunosorbent assay confirmed direct binding of BanLec to gp120 and indicated that BanLec can recognize the high mannose structures that are recognized by the monoclonal antibody 2G12. Furthermore, BanLec is able to block HIV-1 cellular entry as indicated by temperature-sensitive viral entry studies and by the decreased levels of the strong-stop product of early reverse transcription seen in the presence of BanLec. Thus, our data indicate that BanLec inhibits HIV-1 infection by binding to the glycosylated viral envelope and blocking cellular entry. The relative anti-HIV activity of BanLec compared favorably to other anti-HIV lectins, such as snowdrop lectin and Griffithsin, and to T-20 and maraviroc, two anti-HIV drugs currently in clinical use. Based on these results, BanLec is a potential component for an anti-viral microbicide that could be used to prevent the sexual transmission of HIV-1.