Development of telmisartan in the therapy of spinal cord injury: pre-clinical study in rats 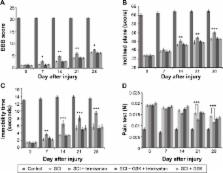 Decrease of peroxisome proliferator-activated receptors-δ (PPARδ) expression has been observed after spinal cord injury (SCI). Increase of PPARδ may improve the damage in SCI. Telmisartan, the antihypertensive agent, has been mentioned to increase the expression of PPARδ. Thus, we are going to screen the effectiveness of telmisartan in SCI for the development of it in clinical application.

In the present study, we used compressive SCI in rats. Telmisartan was then used to evaluate the influence in rats after SCI. Change in PPARδ expression was identified by Western blots. Also, behavioral tests were performed to check the recovery of damage.

Recovery of damage from SCI was observed in telmisartan-treated rats. Additionally, this action of telmisartan was inhibited by GSK0660 at the dose sufficient to block PPARδ. However, metformin at the dose enough to activate adenosine monophosphate-activated protein kinase failed to produce similar action as telmisartan. Thus, mediation of adenosine monophosphate-activated protein kinase in this action of telmisartan can be rule out. Moreover, telmisartan reversed the expressions of PPARδ in rats with SCI.

The obtained data suggest that telmisartan can improve the damage of SCI in rats through an increase in PPARδ expression. Thus, telmisartan is useful to be developed as an agent in the therapy of SCI.

A Rivlin,  Charles H. Tator (1977)
A new method was developed for the clinical assessment of motor function in rats after experimental spinal cord injury. The method consists of placing the animal on an inclined plane which can be adjusted to provide a slope of varying grade, and then assessing the maximum angle of the plane at which the animal can maintain its position without falling. The method was used to quantitate motor function in normal rats and in rats subjected to myelectomy, and consistently showed major differences between the two groups. The method has many positive features: the plane is easy to construct and of low cost; and the test is rapid, non-invasive, repeatable, and consistent.

Effect of duration of acute spinal cord compression in a new acute cord injury model in the rat.

Neuroprotective efficacy of the peroxisome proliferator-activated receptor delta-selective agonists in vitro and in vivo.

Y Muramatsu,  S. Yamazaki,  Akinori Iwashita … (2007)
Peroxisome proliferator-activated receptors (PPARs) are members of the nuclear receptor superfamily and function as ligand-modulated transcription factors that regulate gene expression in many important biological processes. The PPARdelta subtype has the highest expression in the brain and is postulated to play a major role in neuronal cell function; however, the precise physiological roles of this receptor remain to be elucidated. Herein, we show that the high-affinity PPARdelta agonists L-165041 [4-[3-(4-acetyl-3-hydroxy-2-propylphenoxy)-propoxyl]phenoxy]-acetic acid] and GW501516 [2-methyl4-((4-methyl-2-(4-trifluoromethylphenyl)-1,3-triazol-5-yl)-methylsulfanyl)phenoxy acetic acid] protect against cytotoxin-induced SH-SY5Y cell injury in vitro and both ischemic brain injury and 1-methyl-4-phenyl-1,2,3,6-tetrahydropyridine (MPTP) neurotoxicity in vivo. In the SH-SY5Y studies, treatment with L-165041 or GW501516 significantly and concentration-dependently attenuated cell death following thapsigargin, 1-methyl-4-phenylpyridinium, or staurosporine exposure, with the extent of damage correlated with the level of caspase-3 inhibition. In the transient (90 min) middle cerebral artery occlusion model of ischemic brain injury in rats, i.c.v. infusion of L-165041 or GW501516 significantly attenuated the ischemic brain damage measured 24 h after reperfusion. Moreover, the PPARdelta agonists also significantly attenuated MPTP-induced depletion of striatal dopamine and related metabolite contents in mouse brain. These results demonstrate that subtype-selective PPARdelta agonists possess antiapoptotic properties in vitro, which may underlie their potential neuroprotective potential in in vivo experimental models of cerebral ischemia and Parkinson's disease (PD). These findings suggest that PPARdelta agonists could be useful tools for understanding the role of PPARdelta in other neurodegenerative disorders, as well as attractive therapeutic candidates for stroke and neurodegenerative diseases such as PD.