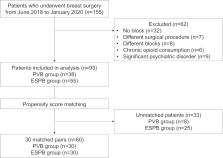 Thoracic paravertebral block (TPVB) is an established analgesic technique for breast surgery although it is technically challenging. Erector spinae plane block (ESPB) requires less technical expertise and may be an alternative to TPVB. However, whether ESPB has similar analgesic effects to TPVB for breast surgery is still inconclusive. Moreover, information on sensory blockade of ESPB is scarce. Accordingly, we conducted this retrospective propensity-matched study to see if ESPB could provide comparable analgesic effects to TPVB in patients undergoing breast surgery. We also compared cutaneous sensory block levels after the two techniques.

In this retrospective cohort study, we analyzed data saved in our database and compared the two techniques using a propensity matching method. The data of patients who underwent unilateral breast surgery under general anesthesia with the addition of either TPVB or ESPB were identified. We considered that the analgesic efficacy of ESPB was noninferior to TPVB if both postoperative fentanyl consumption and area under the curve (AUC) for pain scores within 24 h were within 50 µg and 240 mm･h margins, respectively. Cutaneous sensory block levels, additional analgesic requirements, and complications were also compared between the two groups.

Among 93 patients, 30 patients for each group were matched. Both postoperative fentanyl consumption and AUC for pain scores after ESPB were noninferior to those after TPVB. ESPB did not produce sensory blockade consistently, and the number of dermatomes was smaller after ESPB [1 (0–3)] [median (interquartile range)] than after TPVB [4 (2–5)] (P=0.002). No serious complications related to blocks were observed.

ESPB and TPVB provided comparable postoperative analgesia for 24 h in patients undergoing breast surgery. Dermatomal sensory blockade was, however, less apparent and narrower after ESPB than after TPVB.

Ronald Liebman,  E. Gallagher,  Polly Bijur (2001)
In a landmark hypothesis-generating study, Todd et al found that a difference of approximately 13 mm (95% confidence interval [CI] 10 to 17 mm) on a visual analog scale (VAS) represented the minimum change in acute pain that was clinically significant in a cohort of trauma patients. We test the hypothesis that the minimum clinically significant change in pain as measured by the VAS in an independent, more heterogeneous validation cohort is approximately 13 mm. This was a prospective, observational cohort study of adults presenting to 2 urban emergency departments with pain. At 30-minute intervals during a 2-hour period, patients marked a VAS and were asked if their pain was "much less," "a little less," "about the same," "a little more," or "much more." All data were obtained without reference to prior VAS scores. The minimum clinically significant change in pain was defined a priori as the difference in millimeters between the current and immediately preceding VAS scores when "a little more" or "a little less pain" was reported. Ninety-six patients enrolled in the study, providing 332 paired pain measurements. There were 141 paired measurements designated by patients as "a little less" or "a little more" pain. The mean clinically significant difference between consecutive ratings of pain in the combined "little less" or "little more" groups was 13 mm (95% CI 10 to 16 mm). The difference between this finding and that of Todd et al was 0 mm (95% CI -4 to 4 mm). These data are virtually identical to previous findings indicating that a difference of 13 mm on a VAS represents, on average, the minimum change in acute pain that is clinically significant.