Apoplexy Inside a Giant Medial Sphenoid Wing Meningothelial (Grade I) Meningioma: An Extremely Rare but a Potentially Dangerous Complication 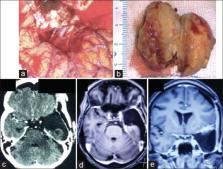 Hemorrhage associated with meningiomas is extremely rare and most commonly occurs in convexity meningiomas of higher grade or the angioblastic variety. Moreover, bleeding associated with a meningioma usually occurs in the form of a subdural hematoma or subarachnoid hemorrhage. We report a case of giant left medial sphenoid wing meningioma with histopathological diagnosis of a meningothelial type with apoplexy. A 54-year-old female presented with clinical features suggestive of apoplexy. Her neuroimaging demonstrated a large left medial sphenoid wing meningioma with features suggestive of an intratumoral bleed with mass effect. Gross total excision of the tumor was done with the good postoperative outcome. The biopsy came out to be Grade I meningothelial meningioma. Apoplexy in meningiomas is extremely rare with a reported incidence of 0.5%–2.4%, especially in a nonconvexity meningioma with histopathological diagnosis of meningothelial variety. Early diagnosis and prompt surgical intervention are critical as meningiomas associated with apoplexy are associated with high morbidity.

Roman Bosnjak,  Christopher Derham,  Mara Popovic … (2005)
The aim of this study was to determine the clinicopathological features of patients with intracranial bleeding from unsuspected meningioma and to relate these data to surgery-related outcome. The authors report on two cases in which hemorrhage of an unsuspected meningioma occurred in the tentorial ridge and in the falx, and they discuss the details of 143 cases described in the literature. A bleeding propensity index of the meningioma, related to the patient's age, sex, and the lesion's intracranial location and histological type was computed as a ratio between the frequencies of bleeding meningioma and all meningiomas. This was tested by independent samples t-test for proportions. A chi-square test was used to determine the correlations between several variables: location and type of bleeding; survival and type of bleeding; and consciousness and survival. Increased bleeding tendency was found to be associated with two age groups ( 70 years), convexity and intraventricular locations, and fibrous meningiomas. The overall mortality rate documented in cases of bleeding meningiomas was 21.1% (13.9% in the computerized tomography [CT] scanning era), and that in surgically treated cases was 9.5% (7.5% in the CT scanning era). The overall major morbidity rate was 36% (33.8% in the CT scanning era). Overall 96.2% of conscious patients survived after their meningiomas spontaneously hemorrhaged. In patients who were unconscious before surgery, overall mortality rate was 74.1%, and that in surgically treated cases was 46.2%. The mortality rate in preoperatively conscious patients (those in whom acute deterioration and irreversible brain damage were prevented by early diagnosis and definitive surgery) was similar (< 3% in the CT scanning era) to that documented in cases in which meningiomas did not bleed. In contrast, the associated morbidity rates were much higher. One-stage total removal of the hemorrhagic meningioma and hematoma is the treatment of choice in such patients.