Introduced Pheidole of the world: taxonomy, biology and distribution 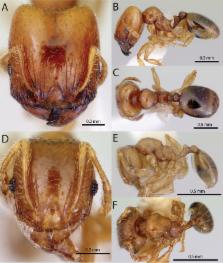 The objective of this study is to provide a detailed taxonomic resource for identifying and studying ants in the genus Pheidole that have established beyond their native ranges. There is an increasing need for systematists to study taxa of specific concern to 21 st century environmental, food security and public health challenges. Systematics has an important role to play in both the theoretical and applied disciplines of invasion biology. Few invaders impact terrestrial ecosystems more than ants. Among the world’s 100 worst invasive species is the cosmopolitan and highly destructive Pheidole megacephala (Fabricius). Accurate identification of Pheidole megacephala is imperative for the success of screening, management and eradication programs designed to protect native ecosystems from the impacts of this destructive species. However, accurate identification of Pheidole species is difficult because of their taxonomic diversity, dimorphic worker caste and lack of taxonomic resources. Illustrated keys are included, along with the taxonomic history, taxonomic diagnoses, biological notes and risk statements for the 14 most invasive members of the genus. Global distribution maps based on over 14,000 specimen and literature records are presented for each species. These results of this work will facilitate identification of pest species, determination of climatic and habitat requirements, discovery of pest origins, horizon scanning and assessment of invasion pathways. The following new synonym is proposed, with the senior synonym listed first and the junior synonyms in parentheses: Pheidole indica Mayr (= Pheidole teneriffana Forel, and its synonyms Pheidole taina Aguayo and Pheidole voeltzkowii Forel). Pheidole navigans Forel, stat. rev., stat. n. is removed from synonymy and elevated to species rank. It is proposed that records of Pheidole moerens Forel outside of the Mesoamerica and the Caribbean refer instead to Pheidole navigans or other heterospecific taxa in the Pheidole flavens species complex. We propose that the names Pheidole anastasii Emery and Pheidole floridana Emery have been widely misapplied to North American outdoor records of Pheidole bilimeki Mayr. It is suggested that the synonymy of Pheidole lauta Wheeler be transferred from Pheidole floridana Emery to Pheidole bilimeki Mayr.

The Causes and Consequences of Ant Invasions

The evolutionary consequences of biological invasions

Andrew V. Suarez,  NEIL TSUTSUI (2008)
A major challenge of invasion biology is the development of a predictive framework that prevents new invasions. This is inherently difficult because different biological characteristics are important at the different stages of invasion: opportunity/transport, establishment and spread. Here, we draw from recent research on a variety of taxa to examine the evolutionary causes and consequences of biological invasions. The process of introduction may favour species with characteristics that promote success in highly disturbed, human-dominated landscapes, thus exerting novel forms of selection on introduced populations. Moreover, evidence is accumulating that multiple introductions can often be critical to the successful establishment and spread of introduced species, as they may be important sources of genetic variation necessary for adaptation in new environments or may permit the introduction of novel traits. Thus, not only should the introduction of new species be prevented, but substantial effort should also be directed to preventing the secondary introduction of previously established species (and even movement of individuals among introduced populations). Modern molecular techniques can take advantage of genetic changes postintroduction to determine the source of introduced populations and their vectors of spread, and to elucidate the mechanisms of success of some invasive species. Moreover, the growing availability of genomic tools will permit the identification of underlying genetic causes of invasive success.

An agenda for invasion biology