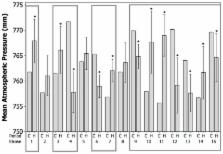 Stroke is the fifth leading cause of death in the United States, and is the leading cause of serious, long-term disability worldwide. There are at least 795,000 new or recurrent strokes each year, and approximately 85% of all stroke occurrences are ischemic. Unfortunately, companion animals are also at risk for ischemic stroke. Although the exact incidence of ischemic stroke in companion animals is unknown, some studies, and the veterinary information network (VIN), report that approximately 3% of neurological case referrals are due to a stroke. There is a long list of predisposing factors associated with the risk of ischemic stroke in both humans and canines; however, these factors do not explain why a stroke happens at a particular time on a particular day. Our understanding of these potential stroke “triggers” is limited, and the effect of transient environmental exposures may be one such “trigger”. The present study investigated the extent to which the natural occurrence of canine ischemic stroke was related to the weather conditions in the time-period immediately preceding the onset of stroke. The results of the present study demonstrated that the change in weather conditions could be a potential stroke trigger, with the strokes evaluated occurring after periods of rapid, large fluctuations in weather conditions. There are currently no epidemiological data on the seasonal variability of ischemic stroke in dogs, and determining whether canine stroke parallels human stroke would further validate the use of companion dogs as an appropriate naturally occurring model.

Turgut Tatlisumak,  Aysan Durukan (2007)
Ischemic stroke is a devastating disease with a complex pathophysiology. Animal modeling of ischemic stroke serves as an indispensable tool first to investigate mechanisms of ischemic cerebral injury, secondly to develop novel antiischemic regimens. Most of the stroke models are carried on rodents. Each model has its particular strengths and weaknesses. Mimicking all aspects of human stroke in one animal model is not possible since ischemic stroke is itself a very heterogeneous disorder. Experimental ischemic stroke models contribute to our understanding of the events occurring in ischemic and reperfused brain. Major approaches developed to treat acute ischemic stroke fall into two categories, thrombolysis and neuroprotection. Trials aimed to evaluate effectiveness of recombinant tissue-type plasminogen activator in longer time windows with finer selection of patients based on magnetic resonance imaging tools and trials of novel recanalization methods are ongoing. Despite the failure of most neuroprotective drugs during the last two decades, there are good chances to soon have effective neuroprotectives with the help of improved preclinical testing and clinical trial design. In this article, we focus on various rodent animal models, pathogenic mechanisms, and promising therapeutic approaches of ischemic stroke.

Tomoyuki Awano,  Gary S. Johnson,  Claire Wade … (2009)
Canine degenerative myelopathy (DM) is a fatal neurodegenerative disease prevalent in several dog breeds. Typically, the initial progressive upper motor neuron spastic and general proprioceptive ataxia in the pelvic limbs occurs at 8 years of age or older. If euthanasia is delayed, the clinical signs will ascend, causing flaccid tetraparesis and other lower motor neuron signs. DNA samples from 38 DM-affected Pembroke Welsh corgi cases and 17 related clinically normal controls were used for genome-wide association mapping, which produced the strongest associations with markers on CFA31 in a region containing the canine SOD1 gene. SOD1 was considered a regional candidate gene because mutations in human SOD1 can cause amyotrophic lateral sclerosis (ALS), an adult-onset fatal paralytic neurodegenerative disease with both upper and lower motor neuron involvement. The resequencing of SOD1 in normal and affected dogs revealed a G to A transition, resulting in an E40K missense mutation. Homozygosity for the A allele was associated with DM in 5 dog breeds: Pembroke Welsh corgi, Boxer, Rhodesian ridgeback, German Shepherd dog, and Chesapeake Bay retriever. Microscopic examination of spinal cords from affected dogs revealed myelin and axon loss affecting the lateral white matter and neuronal cytoplasmic inclusions that bind anti-superoxide dismutase 1 antibodies. These inclusions are similar to those seen in spinal cord sections from ALS patients with SOD1 mutations. Our findings identify canine DM to be the first recognized spontaneously occurring animal model for ALS.