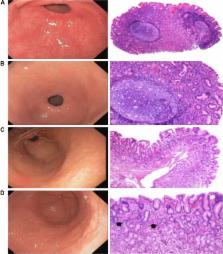 The term nodular is not included in the Sydney classification and there is no widely accepted histopathological definition. It has been proposed that the presence of antral nodularity could predict Helicobacter pylori (H. pylori) infection. The aim of this study was to determine the diagnostic accuracy of nodular gastritis (NG) for H. pylori infection after a rigorous standardization process, and to describe the associated histopathological characteristics.

There was a strong correlation between NG and H. pylori, but only after rigorous evaluation. The use of the term NG requires extensive standardization before it can be used clinically.

Classification and grading of gastritis. The updated Sydney System. International Workshop on the Histopathology of Gastritis, Houston 1994.

R Genta,  J Yardley,  Donald M. Dixon … (1996)
The Sydney System for the classification of gastritis emphasized the importance of combining topographical, morphological, and etiological information into a schema that would help to generate reproducible and clinically useful diagnoses. To reappraise the Sydney System 4 years after its introduction, a group of gastrointestinal pathologists from various parts of the world met in Houston, Texas, in September 1994. The aims of the workshop were (a) to establish an agreed terminology of gastritis; (b) to identify, define, and attempt to resolve some of the problems associated with the Sydney System. This article introduces the Sydney System as it was revised at the Houston Gastritis Workshop and represents the consensus of the participants. Overall, the principles and grading of the Sydney System were only slightly modified, the grading being aided by the provision of a visual analogue scale. The terminology of the final classification has been improved to emphasize the distinction between the atrophic and nonatrophic stomach; the names used for each entity were selected because they are generally acceptable to both pathologists and gastroenterologists. In addition to the main categories and atrophic and nonatrophic gastritis, the special or distinctive forms are described and their respective diagnostic criteria are provided. The article includes practical guidelines for optimal biopsy sampling of the stomach, for the use of the visual analogue scales for grading the histopathologic features, and for the formulation of a comprehensive standardized diagnosis. A glossary of gastritis-related terms as used in this article is provided.

Nodular gastritis in adults is caused by Helicobacter pylori infection.