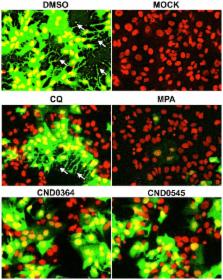 Chikungunya virus (CHIKV) is a mosquito-borne arthrogenic alphavirus that causes acute febrile illness in humans accompanied by joint pains and in many cases, persistent arthralgia lasting weeks to years. The re-emergence of CHIKV has resulted in numerous outbreaks in the eastern hemisphere, and threatens to expand in the foreseeable future. Unfortunately, no effective treatment is currently available. The present study reports the use of resazurin in a cell-based high-throughput assay, and an image-based high-content assay to identify and characterize inhibitors of CHIKV-infection in vitro. CHIKV is a highly cytopathic virus that rapidly kills infected cells. Thus, cell viability of HuH-7 cells infected with CHIKV in the presence of compounds was determined by measuring metabolic reduction of resazurin to identify inhibitors of CHIKV-associated cell death. A kinase inhibitor library of 4,000 compounds was screened against CHIKV infection of HuH-7 cells using the resazurin reduction assay, and the cell toxicity was also measured in non-infected cells. Seventy-two compounds showing ≥50% inhibition property against CHIKV at 10 µM were selected as primary hits. Four compounds having a benzofuran core scaffold (CND0335, CND0364, CND0366 and CND0415), one pyrrolopyridine (CND0545) and one thiazol-carboxamide (CND3514) inhibited CHIKV-associated cell death in a dose-dependent manner, with EC 50 values between 2.2 µM and 7.1 µM. Based on image analysis, these 6 hit compounds did not inhibit CHIKV replication in the host cell. However, CHIKV-infected cells manifested less prominent apoptotic blebs typical of CHIKV cytopathic effect compared with the control infection. Moreover, treatment with these compounds reduced viral titers in the medium of CHIKV-infected cells by up to 100-fold. In conclusion, this cell-based high-throughput screening assay using resazurin, combined with the image-based high content assay approach identified compounds against CHIKV having a novel antiviral activity - inhibition of virus-induced CPE - likely by targeting kinases involved in apoptosis.

Recent outbreaks and expanding global distribution of Chikungunya virus (CHIKV) in different regions of Asia, Africa and Europe necessitates the development of effective therapeutic interventions. At present, only two antiviral compounds (chloroquine and ribavirin) that inhibit viral infection in vitro have been used in clinical cases of chikungunya infections. However, neither of these compounds have shown strong efficacy in vivo. Recent attempts to identify new antiviral candidates for CHIKV using cell-based phenotypic approach have been reported. In this study, we developed a simple cell-based high-throughput assay using resazurin to identify potential anti-CHIKV compounds. This high-throughput assay is based on the metabolic reduction of resazurin to the highly fluorescent resorufin by viable cells as an indicator of activity against CHIKV-induced CPE. We screened 4,000 small molecules belonging to the BioFocus kinase inhibitor chemical library and found a cluster of related molecules with antiviral activity against CHIKV. Finally, we characterized the putative mode of action of these active compounds using an image-based high content assay and conventional virological methods ( i.e., virus yield reduction assay, microneutralization assay).

Investigation of the Alamar Blue (resazurin) fluorescent dye for the assessment of mammalian cell cytotoxicity.

I Wilson,  T Orton,  F Pognan … (2000)
We show here the identity of Alamar Blue as resazurin. The 'resazurin reduction test' has been used for about 50 years to monitor bacterial and yeast contamination of milk, and also for assessing semen quality. Resazurin (blue and nonfluorescent) is reduced to resorufin (pink and highly fluorescent) which is further reduced to hydroresorufin (uncoloured and nonfluorescent). It is still not known how this reduction occurs, intracellularly via enzyme activity or in the medium as a chemical reaction, although the reduced fluorescent form of Alamar Blue was found in the cytoplasm and of living cells nucleus of dead cells. Recently, the dye has gained popularity as a very simple and versatile way of measuring cell proliferation and cytotoxicity. This dye presents numerous advantages over other cytotoxicity or proliferation tests but we observed several drawbacks to the routine use of Alamar Blue. Tests with several toxicants in different cell lines and rat primary hepatocytes have shown accumulation of the fluorescent product of Alamar Blue in the medium which could lead to an overestimation of cell population. Also, the extensive reduction of Alamar Blue by metabolically active cells led to a final nonfluorescent product, and hence an underestimation of cellular activity.

Changing patterns of chikungunya virus: re-emergence of a zoonotic arbovirus.

The Newala epidemic. III. The virus: isolation, pathogenic properties and relationship to the epidemic.

This work was supported by the National Research Foundation of Korea (NRF) grant funded by the Korea government (MSIP)(No. 2007-00559), Gyeonggi-do and KISTI. The funders had no role in study design, data collection and analysis, decision to publish, or preparation of the manuscript.