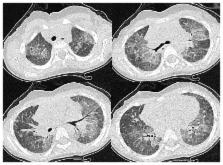 Hermansky-Pudlak syndrome (HPS), a hereditary multisystem disorder with oculocutaneous albinism, may be caused by mutations in one of at least 10 separate genes. The HPS-2 subtype is distinguished by the presence of neutropenia and knowledge of its pulmonary phenotype in children is scarce.

Six children with genetically proven HPS-2 presented to the chILD-EU register between 2009 and 2017; the data were collected systematically and imaging studies were scored blinded.

Pulmonary symptoms including dyspnea, coughing, need for oxygen, and clubbing started 3.3 years before the diagnosis was made at the mean age of 8.83 years (range 2-15). All children had recurrent pulmonary infections, 3 had a spontaneous pneumothorax, and 4 developed scoliosis. The frequency of pulmonary complaints increased over time. The leading radiographic pattern was ground-glass opacities with a rapid increase in reticular pattern and traction bronchiectasis between initial and follow-up Computer tomography (CT) in all subjects. Honeycombing and cysts were newly detectable in 3 patients. Half of the patients received a lung biopsy for diagnosis; histological patterns were cellular non-specific interstitial pneumonia, usual interstitial pneumonia-like, and desquamative interstitial pneumonia.

HPS-2 is characterized by a rapidly fibrosing lung disease during early childhood. Effective treatments are required.

M Ip,  P Quanjer,  Kayla S. B. Culver … (2012)
The aim of the Task Force was to derive continuous prediction equations and their lower limits of normal for spirometric indices, which are applicable globally. Over 160,000 data points from 72 centres in 33 countries were shared with the European Respiratory Society Global Lung Function Initiative. Eliminating data that could not be used (mostly missing ethnic group, some outliers) left 97,759 records of healthy nonsmokers (55.3% females) aged 2.5-95 yrs. Lung function data were collated and prediction equations derived using the LMS method, which allows simultaneous modelling of the mean (mu), the coefficient of variation (sigma) and skewness (lambda) of a distribution family. After discarding 23,572 records, mostly because they could not be combined with other ethnic or geographic groups, reference equations were derived for healthy individuals aged 3-95 yrs for Caucasians (n=57,395), African-Americans (n=3,545), and North (n=4,992) and South East Asians (n=8,255). Forced expiratory value in 1 s (FEV(1)) and forced vital capacity (FVC) between ethnic groups differed proportionally from that in Caucasians, such that FEV(1)/FVC remained virtually independent of ethnic group. For individuals not represented by these four groups, or of mixed ethnic origins, a composite equation taken as the average of the above equations is provided to facilitate interpretation until a more appropriate solution is developed. Spirometric prediction equations for the 3-95-age range are now available that include appropriate age-dependent lower limits of normal. They can be applied globally to different ethnic groups. Additional data from the Indian subcontinent and Arabic, Polynesian and Latin American countries, as well as Africa will further improve these equations in the future.

Alexander Bankier,  Theresa C McLoud,  Heber MacMahon … (2008)
Members of the Fleischner Society compiled a glossary of terms for thoracic imaging that replaces previous glossaries published in 1984 and 1996 for thoracic radiography and computed tomography (CT), respectively. The need to update the previous versions came from the recognition that new words have emerged, others have become obsolete, and the meaning of some terms has changed. Brief descriptions of some diseases are included, and pictorial examples (chest radiographs and CT scans) are provided for the majority of terms. (c) RSNA, 2008.

Genetic defects and clinical characteristics of patients with a form of oculocutaneous albinism (Hermansky-Pudlak syndrome).