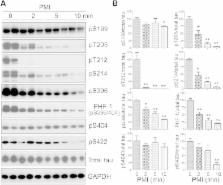 The protein kinase complement of the human genome.

G. Manning (2002)
We have catalogued the protein kinase complement of the human genome (the "kinome") using public and proprietary genomic, complementary DNA, and expressed sequence tag (EST) sequences. This provides a starting point for comprehensive analysis of protein phosphorylation in normal and disease states, as well as a detailed view of the current state of human genome analysis through a focus on one large gene family. We identify 518 putative protein kinase genes, of which 71 have not previously been reported or described as kinases, and we extend or correct the protein sequences of 56 more kinases. New genes include members of well-studied families as well as previously unidentified families, some of which are conserved in model organisms. Classification and comparison with model organism kinomes identified orthologous groups and highlighted expansions specific to human and other lineages. We also identified 106 protein kinase pseudogenes. Chromosomal mapping revealed several small clusters of kinase genes and revealed that 244 kinases map to disease loci or cancer amplicons.

The origins of protein phosphorylation.

Philip Cohen (2002)
The reversible phosphorylation of proteins is central to the regulation of most aspects of cell function but, even after the first protein kinase was identified, the general significance of this discovery was slow to be appreciated. Here I review the discovery of protein phosphorylation and give a personal view of the key findings that have helped to shape the field as we know it today.