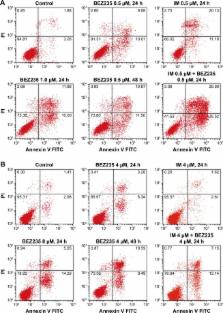 Phosphatidylinositol 3-kinase/Akt/mammalian target of rapamycin (PI3K/Akt/mTOR) pathway is a therapy target of cancer. We aimed to confirm the effect of dual PI3K/mTOR inhibitor NVP-BEZ235 on proliferation, apoptosis, and autophagy of chronic myelogenous leukemia (CML) cells and sensitivity of tyrosine kinase inhibitor in vitro.

Two human CML cell lines, K562 and KBM7R (T315I mutant strain), were used. The proliferation of CML cells was detected by MTS (Owen’s reagent) assay. Cell cycle and apoptosis assay were examined by flow cytometric analysis. The phosphorylation levels and the expression levels were both evaluated by Western blot analysis. NVP-BEZ235 in combination with imatinib was also used to reveal the effect on proliferation and apoptosis.

Christian Schnell,  Kevin Schoemaker,  William Sellers … (2008)
The phosphatidylinositol 3-kinase (PI3K)/Akt/mammalian target of rapamycin inhibitor (mTOR) pathway is often constitutively activated in human tumor cells, providing unique opportunities for anticancer therapeutic intervention. NVP-BEZ235 is an imidazo[4,5-c]quinoline derivative that inhibits PI3K and mTOR kinase activity by binding to the ATP-binding cleft of these enzymes. In cellular settings using human tumor cell lines, this molecule is able to effectively and specifically block the dysfunctional activation of the PI3K pathway, inducing G(1) arrest. The cellular activity of NVP-BEZ235 translates well in in vivo models of human cancer. Thus, the compound was well tolerated, displayed disease stasis when administered orally, and enhanced the efficacy of other anticancer agents when used in in vivo combination studies. Ex vivo pharmacokinetic/pharmacodynamic analyses of tumor tissues showed a time-dependent correlation between compound concentration and PI3K/Akt pathway inhibition. Collectively, the preclinical data show that NVP-BEZ235 is a potent dual PI3K/mTOR modulator with favorable pharmaceutical properties. NVP-BEZ235 is currently in phase I clinical trials.

Chronic myeloid leukemia: an update of concepts and management recommendations of European LeukemiaNet.

Marianne Silver,  Richard Larson,  Jerald Radich … (2009)
To review and update the European LeukemiaNet (ELN) recommendations for the management of chronic myeloid leukemia with imatinib and second-generation tyrosine kinase inhibitors (TKIs), including monitoring, response definition, and first- and second-line therapy. These recommendations are based on a critical and comprehensive review of the relevant papers up to February 2009 and the results of four consensus conferences held by the panel of experts appointed by ELN in 2008. Cytogenetic monitoring was required at 3, 6, 12, and 18 months. Molecular monitoring was required every 3 months. On the basis of the degree and the timing of hematologic, cytogenetic, and molecular results, the response to first-line imatinib was defined as optimal, suboptimal, or failure, and the response to second-generation TKIs was defined as suboptimal or failure. Initial treatment was confirmed as imatinib 400 mg daily. Imatinib should be continued indefinitely in optimal responders. Suboptimal responders may continue on imatinb, at the same or higher dose, or may be eligible for investigational therapy with second-generation TKIs. In instances of imatinib failure, second-generation TKIs are recommended, followed by allogeneic hematopoietic stem-cell transplantation only in instances of failure and, sometimes, suboptimal response, depending on transplantation risk.

Violeta Serra,  Ben Markman,  Maurizio Scaltriti … (2008)
Phosphatidylinositol-3-kinase (PI3K) pathway deregulation is a common event in human cancer, either through inactivation of the tumor suppressor phosphatase and tensin homologue deleted from chromosome 10 or activating mutations of p110-alpha. These hotspot mutations result in oncogenic activity of the enzyme and contribute to therapeutic resistance to the anti-HER2 antibody trastuzumab. The PI3K pathway is, therefore, an attractive target for cancer therapy. We have studied NVP-BEZ235, a dual inhibitor of the PI3K and the downstream mammalian target of rapamycin (mTOR). NVP-BEZ235 inhibited the activation of the downstream effectors Akt, S6 ribosomal protein, and 4EBP1 in breast cancer cells. The antiproliferative activity of NVP-BEZ235 was superior to the allosteric selective mTOR complex inhibitor everolimus in a panel of 21 cancer cell lines of different origin and mutation status. The described Akt activation due to mTOR inhibition was prevented by higher doses of NVP-BEZ235. NVP-BEZ235 reversed the hyperactivation of the PI3K/mTOR pathway caused by the oncogenic mutations of p110-alpha, E545K, and H1047R, and inhibited the proliferation of HER2-amplified BT474 cells exogenously expressing these mutations that render them resistant to trastuzumab. In trastuzumab-resistant BT474 H1047R breast cancer xenografts, NVP-BEZ235 inhibited PI3K signaling and had potent antitumor activity. In treated animals, there was complete inhibition of PI3K signaling in the skin at pharmacologically active doses, suggesting that skin may serve as surrogate tissue for pharmacodynamic studies. In summary, NVP-BEZ235 inhibits the PI3K/mTOR axis and results in antiproliferative and antitumoral activity in cancer cells with both wild-type and mutated p110-alpha.