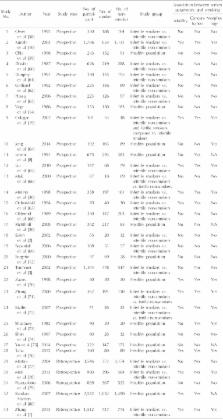 Many studies have reported that the contents of cigarette smoke negatively affect sperm parameters, seminal plasma, and various other fertility factors. Nevertheless, the actual effect of smoking on male fertility is not clear. The effect of smoking on semen parameters is based on the well-established biological finding that smoking increases the presence of reactive oxygen species, thereby resulting in oxidative stress (OS). OS has devastating effects on sperm parameters, such as viability and morphology, and impairs sperm function, hence reducing male fertility. However, not all studies have come to the same conclusions. This review sheds light upon the arguable association between smoking and male fertility and also assesses the impact of non-smoking routes of tobacco consumption on male infertility. It also highlights the evidence that links smoking with male infertility, including newly emerging genetic and epigenetic data, and discusses the clinical implications thereof.

Marie Ng,  Michael Freeman,  Thomas D Fleming … (2014)
Tobacco is a leading global disease risk factor. Understanding national trends in prevalence and consumption is critical for prioritizing action and evaluating tobacco control progress. To estimate the prevalence of daily smoking by age and sex and the number of cigarettes per smoker per day for 187 countries from 1980 to 2012. Nationally representative sources that measured tobacco use (n = 2102 country-years of data) were systematically identified. Survey data that did not report daily tobacco smoking were adjusted using the average relationship between different definitions. Age-sex-country-year observations (n = 38,315) were synthesized using spatial-temporal gaussian process regression to model prevalence estimates by age, sex, country, and year. Data on consumption of cigarettes were used to generate estimates of cigarettes per smoker per day. Modeled age-standardized prevalence of daily tobacco smoking by age, sex, country, and year; cigarettes per smoker per day by country and year. Global modeled age-standardized prevalence of daily tobacco smoking in the population older than 15 years decreased from 41.2% (95% uncertainty interval [UI], 40.0%-42.6%) in 1980 to 31.1% (95% UI, 30.2%-32.0%; P < .001) in 2012 for men and from 10.6% (95% UI, 10.2%-11.1%) to 6.2% (95% UI, 6.0%-6.4%; P < .001) for women. Global modeled prevalence declined at a faster rate from 1996 to 2006 (mean annualized rate of decline, 1.7%; 95% UI, 1.5%-1.9%) compared with the subsequent period (mean annualized rate of decline, 0.9%; 95% UI, 0.5%-1.3%; P = .003). Despite the decline in modeled prevalence, the number of daily smokers increased from 721 million (95% UI, 700 million-742 million) in 1980 to 967 million (95% UI, 944 million-989 million; P < .001) in 2012. Modeled prevalence rates exhibited substantial variation across age, sex, and countries, with rates below 5% for women in some African countries to more than 55% for men in Timor-Leste and Indonesia. The number of cigarettes per smoker per day also varied widely across countries and was not correlated with modeled prevalence. Since 1980, large reductions in the estimated prevalence of daily smoking were observed at the global level for both men and women, but because of population growth, the number of smokers increased significantly. As tobacco remains a threat to the health of the world's population, intensified efforts to control its use are needed.

Levels of selected carcinogens and toxicants in vapour from electronic cigarettes.

Maciej Goniewicz,  Jakub Knysak,  Michal Gawron … (2014)
Electronic cigarettes, also known as e-cigarettes, are devices designed to imitate regular cigarettes and deliver nicotine via inhalation without combusting tobacco. They are purported to deliver nicotine without other toxicants and to be a safer alternative to regular cigarettes. However, little toxicity testing has been performed to evaluate the chemical nature of vapour generated from e-cigarettes. The aim of this study was to screen e-cigarette vapours for content of four groups of potentially toxic and carcinogenic compounds: carbonyls, volatile organic compounds, nitrosamines and heavy metals. Vapours were generated from 12 brands of e-cigarettes and the reference product, the medicinal nicotine inhaler, in controlled conditions using a modified smoking machine. The selected toxic compounds were extracted from vapours into a solid or liquid phase and analysed with chromatographic and spectroscopy methods. We found that the e-cigarette vapours contained some toxic substances. The levels of the toxicants were 9-450 times lower than in cigarette smoke and were, in many cases, comparable with trace amounts found in the reference product. Our findings are consistent with the idea that substituting tobacco cigarettes with e-cigarettes may substantially reduce exposure to selected tobacco-specific toxicants. E-cigarettes as a harm reduction strategy among smokers unwilling to quit, warrants further study. (To view this abstract in Polish and German, please see the supplementary files online.).

Coordinated changes in AHRR methylation in lymphoblasts and pulmonary macrophages from smokers.

Gene Brody,  Martha Monick,  Catherine R. Sears … (2012)
Smoking is associated with a wide variety of adverse health outcomes including cancer, chronic obstructive pulmonary disease, diabetes, depression, and heart disease. Unfortunately, the molecular mechanisms through which these effects are conveyed are not clearly understood. To examine the potential role of epigenetic factors in these processes, we examined the relationship of smoking to genome wide methylation and gene expression using biomaterial from two independent samples, lymphoblast DNA and RNA (n = 119) and lung alveolar macrophage DNA (n = 19). We found that in both samples current smoking status was associated with significant changes in DNA methylation, in particular at the aryl hydrocarbon receptor repressor (AHRR), a known tumor suppressor. Both baseline DNA methylation and smoker associated DNA methylation signatures at AHRR were highly correlated (r = 0.94 and 0.45, respectively). DNA methylation at the most differentially methylated AHRR CpG residue in both samples, cg0557592, was significantly associated with AHRR gene expression. Pathway analysis of lymphoblast data (genes with most significant methylation changes) demonstrated enrichment in protein kinase C pathways and in TGF beta signaling pathways. For alveolar macrophages, pathway analysis demonstrated alterations in inflammation-related processes. We conclude that smoking is associated with functionally significant genome wide changes in DNA methylation in both lymphoblasts and pulmonary macrophages and that further integrated investigations of these epigenetic effects of smoking on carcinogenesis and other related co-morbidities are indicated. Copyright © 2012 Wiley Periodicals, Inc.