Cost of oropharyngeal dysphagia after stroke: protocol for a systematic review 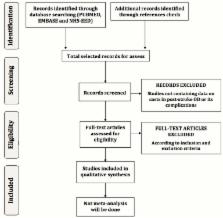 Oropharyngeal dysphagia (OD) is a major disorder following stroke. OD can produce alterations in both the efficacy and safety of deglutition and may result in malnutrition, dehydration, frailty, respiratory infections and pneumonia. These complications can be avoided by early detection and treatment of OD in poststroke patients, and hospital stays, medication and mortality rates can be reduced. In addition to acute in-hospital costs from OD complications, there are other costs related to poststroke OD such as direct non-healthcare costs or indirect costs. The objective of this systematic review is to assess and summarise literature on the costs related to OD in poststroke patients.

A systematic review of studies on the cost of OD and its complications (aspiration, malnutrition, dehydration, aspiration pneumonia and death) in patients who had a stroke will be performed from the perspectives of the hospital, the healthcare system and/or the society. The main outcomes of interest are the costs related to poststroke OD. We will search MEDLINE, Embase and the National Health Service Economic Evaluation Database. Studies will be included if they are partial economic evaluation studies, studies that provide information on costs in adult (>17 years) poststroke patients with OD and/or its complications (malnutrition, dehydration, frailty, respiratory infections and pneumonia) or economic evaluation studies in which the cost of this condition has been estimated. Studies will be excluded if they refer to oesophageal dysphagia or OD caused by causes other than stroke. Main study information will be presented and summarised in tables, separately for studies that provide incremental costs attributable to OD or its complications and studies that report the effect of OD or its complications on total costs of stroke, and according to the perspective from which costs were measured.

The results of this systematic review will be published in a peer-reviewed journal.

The effect of bolus viscosity on swallowing function in neurogenic dysphagia.

Swallowing function after stroke: prognosis and prognostic factors at 6 months.