Dysregulation of ghrelin in diabetes impairs the vascular reparative response to hindlimb ischemia in a mouse model; clinical relevance to peripheral artery disease 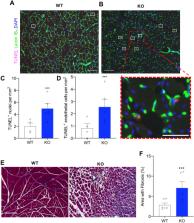 Type 2 diabetes is a prominent risk factor for peripheral artery disease (PAD). Yet, the mechanistic link between diabetes and PAD remains unclear. This study proposes that dysregulation of the endogenous hormone ghrelin, a potent modulator of vascular function, underpins the causal link between diabetes and PAD. Moreover, this study aimed to demonstrate the therapeutic potential of exogenous ghrelin in a diabetic mouse model of PAD. Standard ELISA analysis was used to quantify and compare circulating levels of ghrelin between (i) human diabetic patients with or without PAD (clinic) and (ii) db/db diabetic and non-diabetic mice (lab). Db/db mice underwent unilateral hindlimb ischaemia (HLI) for 14 days and treated with or without exogenous ghrelin (150 µg/kg/day.) Subsequently vascular reparation, angiogenesis, hindlimb perfusion, structure and function were assessed using laser Doppler imaging, micro-CT, microangiography, and protein and micro-RNA (miRNA) analysis. We further examined hindlimb perfusion recovery of ghrelin KO mice to determine whether an impaired vascular response to HLI is linked to ghrelin dysregulation in diabetes. Patients with PAD, with or without diabetes, had significantly lower circulating levels of endogenous ghrelin, compared to healthy individuals. Diabetic db/db mice had ghrelin levels that were only 7% of non-diabetic mice. The vascular reparative capacity of diabetic db/db mice in response to HLI was impaired compared to non-diabetic mice and, importantly, comparable to ghrelin KO mice. Daily therapeutic treatment of db/db mice with ghrelin for 14 days post HLI, stimulated angiogenesis, and improved skeletal muscle architecture and cell survival, which was associated with an increase in pro-angiogenic miRNAs-126 and -132. These findings unmask an important role for endogenous ghrelin in vascular repair following limb ischemia, which appears to be downregulated in diabetic patients. Moreover, these results implicate exogenous ghrelin as a potential novel therapy to enhance perfusion in patients with lower limb PAD, especially in diabetics.

Frank E. Fish,  M. Santoro,  Didier Y. R. Stainier … (2008)
Precise regulation of the formation, maintenance, and remodeling of the vasculature is required for normal development, tissue response to injury, and tumor progression. How specific microRNAs intersect with and modulate angiogenic signaling cascades is unknown. Here, we identified microRNAs that were enriched in endothelial cells derived from mouse embryonic stem (ES) cells and in developing mouse embryos. We found that miR-126 regulated the response of endothelial cells to VEGF. Additionally, knockdown of miR-126 in zebrafish resulted in loss of vascular integrity and hemorrhage during embryonic development. miR-126 functioned in part by directly repressing negative regulators of the VEGF pathway, including the Sprouty-related protein SPRED1 and phosphoinositol-3 kinase regulatory subunit 2 (PIK3R2/p85-beta). Increased expression of Spred1 or inhibition of VEGF signaling in zebrafish resulted in defects similar to miR-126 knockdown. These findings illustrate that a single miRNA can regulate vascular integrity and angiogenesis, providing a new target for modulating vascular formation and function.

The tissue distribution of the mRNA of ghrelin and subtypes of its receptor, GHS-R, in humans.

Blerina Kola,  Márta Korbonits,  Sharmilee Gnanapavan … (2002)
Ghrelin is a novel growth hormone-releasing peptide, originally identified in the rat stomach as the endogenous ligand for the growth hormone secretagogue-receptor (GHS-R1a). Ghrelin is involved in the regulation of GH release, but it has recently been suggested that ghrelin may have other actions, including effects on appetite, carbohydrate metabolism, heart, kidney, pancreas, gonads, and cell proliferation. The distribution of ghrelin, its functional receptor (type 1a) and the unspliced, non-functional GHS-R type 1b mRNA expression was investigated in various human tissues using classical and real-time reverse transcription and polymerase chain reaction. GHS-R1a was predominantly expressed in the pituitary and at much lower levels in the thyroid gland, pancreas, spleen, myocardium and adrenal gland. In contrast, ghrelin was found in the stomach, other parts of the gut and, indeed, in all the tissues studied (adrenal gland, atrium, breast, buccal mucosa, esophagus, Fallopian tube, fat tissue, gall bladder, human lymphocytes, ileum, kidney, left colon, liver, lung, lymph node, muscle, muscle, myocardium, ovary, pancreas, pituitary, placenta, prostate, right colon, skin, spleen, testis, thyroid, and vein). GHS-R1b expression was also widespread in all tissues studied. The significance of the widespread tissue distribution of ghrelin remains to be determined. These data suggest that ghrelin might have widespread physiological effects via different, partly unidentified, subtypes of the GHS-R in endocrine and non-endocrine tissues.

K Ouriel (2001)
Lower extremity peripheral arterial disease (PAD) most frequently presents with pain during ambulation, which is known as "intermittent claudication". Some relief of symptoms is possible with exercise, pharmacotherapy, and cessation of smoking. The risk of limb-loss is overshadowed by the risk of mortality from coexistent coronary artery and cerebrovascular atherosclerosis. Primary therapy should be directed at treating the generalised atherosclerotic process, managing lipids, blood sugar, and blood pressure. By contrast, the risk of limb-loss becomes substantial when there is pain at rest, ischaemic ulceration, or gangrene. Interventions such as balloon angioplasty, stenting, and surgical revascularisation should be considered in these patients with so-called "critical limb ischaemia". The choice of the intervention is dependent on the anatomy of the stenotic or occlusive lesion; percutaneous interventions are appropriate when the lesion is focal and short but longer lesions must be treated with surgical revascularisation to achieve acceptable long-term outcome.