The Alzheimer's Disease-Associated Amyloid β-Protein Is an Antimicrobial Peptide 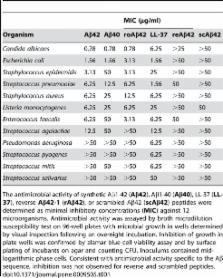 The amyloid β-protein (Aβ) is believed to be the key mediator of Alzheimer's disease (AD) pathology. Aβ is most often characterized as an incidental catabolic byproduct that lacks a normal physiological role. However, Aβ has been shown to be a specific ligand for a number of different receptors and other molecules, transported by complex trafficking pathways, modulated in response to a variety of environmental stressors, and able to induce pro-inflammatory activities.

Our findings suggest Aβ is a hitherto unrecognized AMP that may normally function in the innate immune system. This finding stands in stark contrast to current models of Aβ-mediated pathology and has important implications for ongoing and future AD treatment strategies.

Margherita Zanetti (2004)
Cathelicidins comprise a family of mammalian proteins containing a C-terminal cationic antimicrobial domain that becomes active after being freed from the N-terminal cathelin portion of the holoprotein. Many other members of this family have been identified since the first cathelicidin sequences were reported 10 years ago. The mature peptides generally show a wide spectrum of antimicrobial activity and, more recently, some of them have also been found to exert other biological activities. The human cathelicidin peptide LL-37 is chemotactic for neutrophils, monocytes, mast cells, and T cells; induces degranulation of mast cells; alters transcriptional responses in macrophages; stimulates wound vascularization and re-epithelialization of healing skin. The porcine PR-39 has also been involved in a variety of processes, including promotion of wound repair, induction of angiogenesis, neutrophils chemotaxis, and inhibition of the phagocyte NADPH oxidase activity, whereas the bovine BMAP-28 induces apoptosis in transformed cell lines and activated lymphocytes and may thus help with clearance of unwanted cells at inflammation sites. These multiple actions provide evidence for active participation of cathelicidin peptides in the regulation of the antimicrobial host defenses.

Lars Bertram, Christoph Lange, Kristina Mullin … (2008)
Alzheimer's disease (AD) is a genetically complex and heterogeneous disorder. To date four genes have been established to either cause early-onset autosomal-dominant AD (APP, PSEN1, and PSEN2(1-4)) or to increase susceptibility for late-onset AD (APOE5). However, the heritability of late-onset AD is as high as 80%, (6) and much of the phenotypic variance remains unexplained to date. We performed a genome-wide association (GWA) analysis using 484,522 single-nucleotide polymorphisms (SNPs) on a large (1,376 samples from 410 families) sample of AD families of self-reported European descent. We identified five SNPs showing either significant or marginally significant genome-wide association with a multivariate phenotype combining affection status and onset age. One of these signals (p = 5.7 x 10(-14)) was elicited by SNP rs4420638 and probably reflects APOE-epsilon4, which maps 11 kb proximal (r2 = 0.78). The other four signals were tested in three additional independent AD family samples composed of nearly 2700 individuals from almost 900 families. Two of these SNPs showed significant association in the replication samples (combined p values 0.007 and 0.00002). The SNP (rs11159647, on chromosome 14q31) with the strongest association signal also showed evidence of association with the same allele in GWA data generated in an independent sample of approximately 1,400 AD cases and controls (p = 0.04). Although the precise identity of the underlying locus(i) remains elusive, our study provides compelling evidence for the existence of at least one previously undescribed AD gene that, like APOE-epsilon4, primarily acts as a modifier of onset age.