Efficacy and safety of donepezil, galantamine, and rivastigmine for the treatment of Alzheimer’s disease: A systematic review and meta-analysis 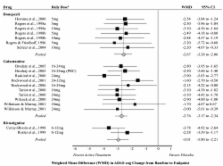 Pharmacologic treatments for Alzheimer’s disease include the cholinesterase inhibitors donepezil, galantamine, and rivastigmine. We reviewed their evidence by searching MEDLINE ®, Embase, The Cochrane Library, and the International Pharmaceutical Abstracts from 1980 through 2007 (July) for placebo-controlled and comparative trials assessing cognition, function, behavior, global change, and safety. Thirty-three articles on 26 studies were included in the review. Meta-analyses of placebo-controlled data support the drugs’ modest overall benefits for stabilizing or slowing decline in cognition, function, behavior, and clinical global change. Three open-label trials and one double-blind randomized trial directly compared donepezil with galantamine and rivastigmine. Results are conflicting; two studies suggest no differences in efficacy between compared drugs, while one study found donepezil to be more efficacious than galantamine, and one study found rivastigmine to be more efficacious than donepezil. Adjusted indirect comparison of placebo-controlled data did not find statistically significant differences among drugs with regard to cognition, but found the relative risk of global response to be better with donepezil and rivastigmine compared with galantamine (relative risk = 1.63 and 1.42, respectively). Indirect comparisons also favored donepezil over galantamine with regard to behavior. Across trials, the incidence of adverse events was generally lowest for donepezil and highest for rivastigmine.

The results of direct and indirect treatment comparisons in meta-analysis of randomized controlled trials.

Enrique H Bucher,  H Guyatt,  Obi L. Griffith … (1997)
When little or no data directly comparing two treatments are available, investigators often rely on indirect comparisons from studies testing the treatments against a control or placebo. One approach to indirect comparison is to pool findings from the active treatment arms of the original controlled trials. This approach offers no advantage over a comparison of observational study data and is prone to bias. We present an alternative model that evaluates the differences between treatment and placebo in two sets of clinical trials, and preserves the randomization of the originally assigned patient groups. We apply the method to data on sulphamethoxazole-trimethoprim or dapsone/pyrimethamine as prophylaxis against Pneumocystis carinii in HIV infected patients. The indirect comparison showed substantial increased benefit from the former (odds ratio 0.37, 95% CI 0.21 to 0.65), while direct comparisons from randomized trials suggests a much smaller difference (risk ratio 0.64, 95% CI 0.45 to 0.90; p-value for difference of effect = 0.11). Direct comparisons of treatments should be sought. When direct comparisons are unavailable, indirect comparison meta-analysis should evaluate the magnitude of treatment effects across studies, recognizing the limited strength of inference.

Emma Birks,  andrew jones,  Mark Stevenson … (2006)
Since the introduction of the first cholinesterase inhibitor (ChEI) in 1997, most clinicians and probably most patients would consider the cholinergic drugs, donepezil, galantamine and rivastigmine, to be the first line pharmacotherapy for mild to moderate Alzheimer's disease.The drugs have slightly different pharmacological properties, but they all work by inhibiting the breakdown of acetylcholine, an important neurotransmitter associated with memory, by blocking the enzyme acetylcholinesterase. The most that these drugs could achieve is to modify the manifestations of Alzheimer's disease. Cochrane reviews of each ChEI for Alzheimer's disease have been completed (Birks 2005, Birks 2005b and Loy 2005). Despite the evidence from the clinical studies and the intervening clinical experience the debate on whether ChEIs are effective continues. To assess the effects of donepezil, galantamine and rivastigmine in people with mild, moderate or severe dementia due to Alzheimer's disease. The Cochrane Dementia and Cognitive Improvement Group's Specialized Register was searched using the terms 'donepezil', 'E2020' , 'Aricept' , galanthamin* galantamin* reminyl, rivastigmine, exelon, "ENA 713" and ENA-713 on 12 June 2005. This Register contains up-to-date records of all major health care databases and many ongoing trial databases. All unconfounded, blinded, randomized trials in which treatment with a ChEI was compared with placebo or another ChEI for patients with mild, moderate or severe dementia due to Alzheimer's disease. Data were extracted by one reviewer (JSB), pooled where appropriate and possible, and the pooled treatment effects, or the risks and benefits of treatment estimated. The results of 13 randomized, double blind, placebo controlled trials demonstrate that treatment for periods of 6 months and one year, with donepezil, galantamine or rivastigmine at the recommended dose for people with mild, moderate or severe dementia due to Alzheimer's disease produced improvements in cognitive function, on average -2.7 points (95%CI -3.0 to -2.3), in the midrange of the 70 point ADAS-Cog Scale. Study clinicians blind to other measures rated global clinical state more positively in treated patients. Benefits of treatment were also seen on measures of activities of daily living and behaviour. None of these treatment effects are large. There is nothing to suggest the effects are less for patients with severe dementia or mild dementia, although there is very little evidence for other than mild to moderate dementia.More patients leave ChEI treatment groups, approximately 29 %, on account of adverse events than leave the placebo groups (18%). There is evidence of more adverse events in total in the patients treated with a ChEI than with placebo. Although many types of adverse event were reported, nausea, vomiting, diarrhoea, were significantly more frequent in the ChEI groups than in placebo. There are four studies, all supported by one of the pharmaceutical companies, in which two ChEIs were compared, two studies of donepezil compared with galantamine, and two of donepezil compared with rivastigmine. In three studies the patients were not blinded to treatment, only the fourth, DON vs RIV/Bullock is double blind. Two of the studies provide little evidence, they are of 12 weeks duration, which is barely long enough to complete the drug titration. There is no evidence from DON vs GAL/Wilcock of a treatment difference between donepezil and galantamine at 52 weeks for cognition, activities of daily living, the numbers who leave the trial before the end of treatment, the number who suffer any adverse event, or any specific adverse event. There is no evidence from DON vs RIV/Bullock of a difference between donepezil and rivastigmine for cognitive function, activities of daily living and behavioural disturbance at two years. Fewer patients suffer adverse events on donepezil than rivastigmine. The three cholinesterase inhibitors are efficacious for mild to moderate Alzheimer's disease. It is not possible to identify those who will respond to treatment prior to treatment. There is no evidence that treatment with a ChEI is not cost effective. Despite the slight variations in the mode of action of the three cholinesterase inhibitors there is no evidence of any differences between them with respect to efficacy. There appears to be less adverse effects associated with donepezil compared with rivastigmine. It may be that galantamine and rivastigmine match donepezil in tolerability if a careful and gradual titration routine over more than three months is used. Titration with donepezil is more straightforward and the lower dose may be worth consideration.