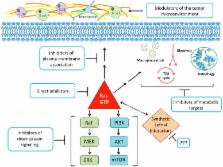 Pancreatic ductal adenocarcinoma (PDAC) is among the deadliest cancers with a dismal 7% 5-year survival rate and is projected to become the second leading cause of cancer-related deaths by 2020. KRAS is mutated in 95% of PDACs and is a well-validated driver of PDAC growth and maintenance. However, despite comprehensive efforts, an effective anti-RAS drug has yet to reach the clinic. Different paths to inhibiting RAS signaling are currently under investigation in the hope of finding a successful treatment. Recently, direct RAS binding molecules have been discovered, challenging the perception that RAS is an “undruggable” protein. Other strategies currently being pursued take an indirect approach, targeting proteins that facilitate RAS membrane association or downstream effector signaling. Unbiased genetic screens have identified synthetic lethal interactors of mutant RAS. Most recently, metabolic targets in pathways related to glycolytic signaling, glutamine utilization, autophagy, and macropinocytosis are also being explored. Harnessing the patient’s immune system to fight their cancer is an additional exciting route that is being considered. The “best” path to inhibiting KRAS has yet to be determined, with each having promise as well as potential pitfalls. We will summarize the state-of-the-art for each direction, focusing on efforts directed toward the development of therapeutics for pancreatic cancer patients with mutated KRAS.

Yinghua Li,  Marcia Haigis,  Gianmarco Contino … (2011)
Macroautophagy (autophagy) is a regulated catabolic pathway to degrade cellular organelles and macromolecules. The role of autophagy in cancer is complex and may differ depending on tumor type or context. Here we show that pancreatic cancers have a distinct dependence on autophagy. Pancreatic cancer primary tumors and cell lines show elevated autophagy under basal conditions. Genetic or pharmacologic inhibition of autophagy leads to increased reactive oxygen species, elevated DNA damage, and a metabolic defect leading to decreased mitochondrial oxidative phosphorylation. Together, these ultimately result in significant growth suppression of pancreatic cancer cells in vitro. Most importantly, inhibition of autophagy by genetic means or chloroquine treatment leads to robust tumor regression and prolonged survival in pancreatic cancer xenografts and genetic mouse models. These results suggest that, unlike in other cancers where autophagy inhibition may synergize with chemotherapy or targeted agents by preventing the up-regulation of autophagy as a reactive survival mechanism, autophagy is actually required for tumorigenic growth of pancreatic cancers de novo, and drugs that inactivate this process may have a unique clinical utility in treating pancreatic cancers and other malignancies with a similar dependence on autophagy. As chloroquine and its derivatives are potent inhibitors of autophagy and have been used safely in human patients for decades for a variety of purposes, these results are immediately translatable to the treatment of pancreatic cancer patients, and provide a much needed, novel vantage point of attack.

Craig Logsdon,  R Hwang,  Armando Rivera … (2008)
Pancreatic adenocarcinoma is characterized by a dense background of tumor associated stroma originating from abundant pancreatic stellate cells. The aim of this study was to determine the effect of human pancreatic stellate cells (HPSC) on pancreatic tumor progression. HPSCs were isolated from resected pancreatic adenocarcinoma samples and immortalized with telomerase and SV40 large T antigen. Effects of HPSC conditioned medium (HPSC-CM) on in vitro proliferation, migration, invasion, soft-agar colony formation, and survival in the presence of gemcitabine or radiation therapy were measured in two pancreatic cancer cell lines. The effects of HPSCs on tumors were examined in an orthotopic murine model of pancreatic cancer by co-injecting them with cancer cells and analyzing growth and metastasis. HPSC-CM dose-dependently increased BxPC3 and Panc1 tumor cell proliferation, migration, invasion, and colony formation. Furthermore, gemcitabine and radiation therapy were less effective in tumor cells treated with HPSC-CM. HPSC-CM activated the mitogen-activated protein kinase and Akt pathways in tumor cells. Co-injection of tumor cells with HPSCs in an orthotopic model resulted in increased primary tumor incidence, size, and metastasis, which corresponded with the proportion of HPSCs. HPSCs produce soluble factors that stimulate signaling pathways related to proliferation and survival of pancreatic cancer cells, and the presence of HPSCs in tumors increases the growth and metastasis of these cells. These data indicate that stellate cells have an important role in supporting and promoting pancreatic cancer. Identification of HPSC-derived factors may lead to novel stroma-targeted therapies for pancreatic cancer.