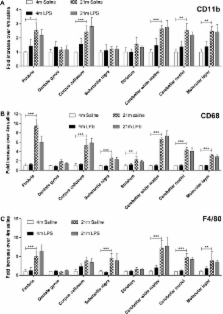 Subtle regional differences in microglial phenotype exist in the adult mouse brain. We investigated whether these differences were amplified during ageing and following systemic challenge with lipopolysaccharide (LPS). We studied microglial morphology and phenotype in young (4mo) and aged (21mo) C57/BL6 mice using immunohistochemistry and quantified the expression levels of surface molecules on microglia in white and grey matter along the rostral-caudal neuraxis. We detected significant regional, age dependent differences in microglial phenotypes, with the microglia of white matter and caudal areas of the CNS exhibiting greater upregulation of CD11b, CD68, CD11c, F4/80 and FcγRI than grey matter and rostral CNS areas. Upregulation of CD11c with age was restricted to the white matter, as was the appearance of multinucleated giant cells. Systemic LPS caused a subtle upregulation of FcγRI after 24 h, but the other markers examined were not affected. Burrowing behaviour and static rod assays were used to assess hippocampal and cerebellar integrity. Aged mice exhibited exaggerated and prolonged burrowing deficits following systemic LPS injection, while in the absence of an inflammatory challenge aged mice performed significantly worse than young mice in the static rod test. Taken together, these findings show that the effects of age on microglial phenotype and functional integrity vary significantly between CNS compartments, as do, albeit to a lesser extent, the effects of systemic LPS.

J P Godbout, J. Chen, J. Abraham … (2005)
Acute cognitive impairment (i.e., delirium) is common in elderly emergency department patients and frequently results from infections that are unrelated to the central nervous system. Since activation of the peripheral innate immune system induces brain microglia to produce inflammatory cytokines that are responsible for behavioral deficits, we investigated if aging exacerbated neuroinflammation and sickness behavior after peripheral injection of lipopolysaccharide (LPS). Microarray analysis revealed a transcriptional profile indicating the presence of primed or activated microglia and increased inflammation in the aged brain. Furthermore, aged mice had a unique gene expression profile in the brain after an intraperitoneal injection of LPS, and the LPS-induced elevation in the brain inflammatory cytokines and oxidative stress was both exaggerated and prolonged compared with adults. Aged mice were anorectic longer and lost more weight than adults after peripheral LPS administration. Moreover, reductions in both locomotor and social behavior remained 24 h later in aged mice, when adults had fully recovered, and the exaggerated neuroinflammatory response in aged mice was not reliably paralleled by increased circulating cytokines in the periphery. Taken together, these data establish that activation of the peripheral innate immune system leads to exacerbated neuroinflammation in the aged as compared with adult mice. This dysregulated link between the peripheral and central innate immune system is likely to be involved in the severe behavioral deficits that frequently occur in older adults with systemic infections.

The receptor DEC-205 expressed by dendritic cells and thymic epithelial cells is involved in antigen processing.

W. Jiang, W J Swiggard, C Heufler … (1995)
Dendritic cells and thymic epithelial cells perform important immunoregulatory functions by presenting antigens in the form of peptides bound to cell-surface major histocompatibility complex (MHC) molecules to T cells. Whereas B cells are known to present specific antigens efficiently through their surface immunoglobins, a comparable mechanism for the capture and efficient presentation of diverse antigens by dendritic cells and thymic epithelial cells has not previously been described. We show here that their antigen-presentation function is associated with the high-level expression of DEC-205, an integral membrane protein homologous to the macrophage mannose receptor and related receptors which are able to bind carbohydrates and mediate endocytosis. DEC-205 is rapidly taken up by means of coated pits and vesicles, and is delivered to a multivesicular endosomal compartment that resembles the MHC class II-containing vesicles implicated in antigen presentation. Rabbit antibodies that bind DEC-205 are presented to reactive T-cell hybridomas 100-fold more efficiently than rabbit antibodies that do not bind DEC-205. Thus DEC-205 is a novel endocytic receptor that can be used by dendritic cells and thymic epithelial cells to direct captured antigens from the extracellular space to a specialized antigen-processing compartment.