Molecular Detection of Bartonella spp. and Hematological Evaluation in Domestic Cats and Dogs from Bangkok, Thailand 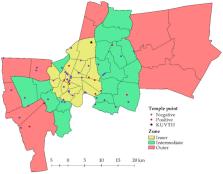 (1) Background: Bartonella spp. are Gram-negative, facultative, intracellular bacteria transmitted by hematophagous insects. Several species cause zoonotic diseases such as cat-scratch disease. Bartonella henselae and Bartonella clarridgeiae are the main species found in Thailand, however, there have been few studies on Bartonella spp. In addition, the hematological evaluation of Bartonella-infected animals is limited in Thailand. The aims of this study were prevalence investigation and hematological evaluation of Bartonella-infected dogs and cats residing in Bangkok, Thailand. (2) Methods: In total, 295 dogs and 513 cats were molecularly evaluated to detect Bartonella spp. using PCR with primers targeting the partial gltA, rpoB, ftsZ, ribC, and groEL genes. In total, 651 domestic animals were evaluated for hematological parameters compared between Bartonella-positive and Bartonella-negative animals. (3) Results: Overall, the prevalence of Bartonella spp. was 1.61% which was found only in free-ranging cats (2.83%). Bartonella henselae and B. clarridgeiae were confirmed from a concatenated phylogenetic tree of partial gltA and ribC genes, with 100% bootstrapping replication. For other housekeeping gene sequences, mixed infection was expected from the amplicons of rpoB, ftsZ, and groEL. Importantly, the mean corpuscular volume (MCV) was significantly increased in Bartonella-positive cats. (4) Conclusions: We suggest that B. henselae and B. clarridgeiae are important species and are still circulating in domestic animals, especially cats. The evaluation of blood parameters, especially a raised MCV, should be of concern in Bartonella infection in asymptomatic cats. Additionally, the knowledge of how to prevent Bartonella-related diseases should be promoted with people in at-risk situations.

Bartonella Spp. in Pets and Effect on Human Health

Factors associated with the rapid emergence of zoonotic Bartonella infections.

Henri-Jean Boulouis,  Chao-Chin Chang,  Jennifer Henn … (2015)
Within the last 15 years, several bacteria of the genus Bartonella were recognized as zoonotic agents in humans and isolated from various mammalian reservoirs. Based on either isolation of the bacterium or PCR testing, eight Bartonella species or subspecies have been recognized as zoonotic agents, including B. henselae, B. elizabethae, B. grahamii, B. vinsonii subsp. arupensis, B. vinsonii subsp. berkhoffii, B. grahamii, B. washoensis and more recently B. koehlerae. The present manuscript reviews the factors associated with the emergence of these zoonotic pathogens, including better diagnostic tools and methods to identify these fastidious bacteria, host immunosuppression (caused by infectious agents, cancer, aging or induced by immunosuppressive drugs), the interaction of co-infection by several infectious agents that may enhanced the pathogenecity of these bacteria, increased outdoor activity leading to exposure to wildlife reservoirs or vectors, poverty and low income associated with infestation by various ectoparasites, such as body lice and finally the dispersal of Bartonellae around the world. Furthermore, a description of the main epidemiological and clinical features of zoonotic Bartonellae is given. Finally, the main means for diagnosis, treatment and prevention of these diseases are presented.

Idir Bitam,  Katharina Dittmar,  Philippe Parola … (2010)
Flea-borne infections are emerging or re-emerging throughout the world, and their incidence is on the rise. Furthermore, their distribution and that of their vectors is shifting and expanding. This publication reviews general flea biology and the distribution of the flea-borne diseases of public health importance throughout the world, their principal flea vectors, and the extent of their public health burden. Such an overall review is necessary to understand the importance of this group of infections and the resources that must be allocated to their control by public health authorities to ensure their timely diagnosis and treatment.