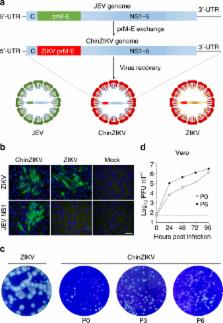 The global spread of Zika virus (ZIKV) and its unexpected association with congenital defects necessitates the rapid development of a safe and effective vaccine. Here we report the development and characterization of a recombinant chimeric ZIKV vaccine candidate (termed ChinZIKV) that expresses the prM-E proteins of ZIKV using the licensed Japanese encephalitis live-attenuated vaccine SA14-14-2 as the genetic backbone. ChinZIKV retains its replication activity and genetic stability in vitro, while exhibiting an attenuation phenotype in multiple animal models. Remarkably, immunization of mice and rhesus macaques with a single dose of ChinZIKV elicits robust and long-lasting immune responses, and confers complete protection against ZIKV challenge. Significantly, female mice immunized with ChinZIKV are protected against placental and fetal damage upon ZIKV challenge during pregnancy. Overall, our study provides an alternative vaccine platform in response to the ZIKV emergency, and the safety, immunogenicity, and protection profiles of ChinZIKV warrant further clinical development.

Given the recent Zika virus (ZIKV) epidemic, development of an effective vaccine is of high importance. Here, the authors use a licensed live-attenuated flavivirus vaccine backbone to develop a ZIKV vaccine and determine immunogenicity, safety and protection profiles in different animal models.

Jernej Mlakar,  Miša Korva,  Nataša Tul … (2016)
A widespread epidemic of Zika virus (ZIKV) infection was reported in 2015 in South and Central America and the Caribbean. A major concern associated with this infection is the apparent increased incidence of microcephaly in fetuses born to mothers infected with ZIKV. In this report, we describe the case of an expectant mother who had a febrile illness with rash at the end of the first trimester of pregnancy while she was living in Brazil. Ultrasonography performed at 29 weeks of gestation revealed microcephaly with calcifications in the fetal brain and placenta. After the mother requested termination of the pregnancy, a fetal autopsy was performed. Micrencephaly (an abnormally small brain) was observed, with almost complete agyria, hydrocephalus, and multifocal dystrophic calcifications in the cortex and subcortical white matter, with associated cortical displacement and mild focal inflammation. ZIKV was found in the fetal brain tissue on reverse-transcriptase-polymerase-chain-reaction (RT-PCR) assay, with consistent findings on electron microscopy. The complete genome of ZIKV was recovered from the fetal brain.

Fernanda Cugola,  Isabella R Fernandes,  Fabiele Russo … (2016)
Summary Zika virus (ZIKV) is an arbovirus belonging to the genus Flavivirus (Family Flaviviridae) and was first described in 1947 in Uganda following blood analyses of sentinel Rhesus monkeys 1 . Until the 20th century, the African and Asian lineages of the virus did not cause meaningful infections in humans. However, in 2007, vectored by Aedes aegypti mosquitoes, ZIKV caused the first noteworthy epidemic on the island of Yap in Micronesia 2 . Patients experienced fever, skin rash, arthralgia and conjunctivitis 2 . From 2013 to 2015, the Asian lineage of the virus caused further massive outbreaks in New Caledonia and French Polynesia. In 2013, ZIKV reached Brazil, later spreading to other countries in South and Central America 3 . In Brazil, the virus has been linked to congenital malformations, including microcephaly and other severe neurological diseases, such as Guillain-Barré syndrome 4,5 . Despite clinical evidence, direct experimental proof showing that the Brazilian ZIKV (ZIKVBR) strain causes birth defects remains missing 6 . Here we demonstrate that the ZIKVBR infects fetuses, causing intra-uterine growth restriction (IUGR), including signs of microcephaly in mice. Moreover, the virus infects human cortical progenitor cells, leading to an increase in cell death. Finally, we observed that the infection of human brain organoids resulted in a reduction of proliferative zones and disrupted cortical layers. These results indicate that ZIKVBR crosses the placenta and causes microcephaly by targeting cortical progenitor cells, inducing cell death by apoptosis and autophagy, impairing neurodevelopment. Our data reinforce the growing body of evidence linking the ZIKVBR outbreak to the alarming number of cases of congenital brain malformations. Our model can be used to determine the efficiency of therapeutic approaches to counteracting the harmful impact of ZIKVBR in human neurodevelopment.