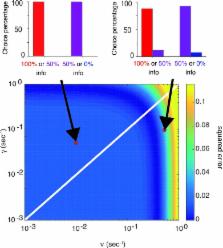 When people anticipate uncertain future outcomes, they often prefer to know their fate in advance. Inspired by an idea in behavioral economics that the anticipation of rewards is itself attractive, we hypothesized that this preference of advance information arises because reward prediction errors carried by such information can boost the level of anticipation. We designed new empirical behavioral studies to test this proposal, and confirmed that subjects preferred advance reward information more strongly when they had to wait for rewards for a longer time. We formulated our proposal in a reinforcement-learning model, and we showed that our model could account for a wide range of existing neuronal and behavioral data, without appealing to ambiguous notions such as an explicit value for information. We suggest that such boosted anticipation significantly drives risk-seeking behaviors, most pertinently in gambling.

People, pigeons and monkeys often want to know in advance whether they will receive a reward in the future. This behaviour is irrational when individuals pay for costly information that makes no difference to an eventual outcome. One explanation is that individuals seek information because anticipating reward has hedonic value (it produces a feeling of pleasure). Consistent with this, pigeons are more likely to seek information when they have to wait longer for the potential reward. However, existing models cannot account for why this anticipation of rewards leads to irrational information-seeking.

In many situations, animals are uncertain about what is going to happen. Providing new information can produce a “prediction error” that indexes a discrepancy between what is expected and what actually happens. Iigaya et al. have now developed a mathematical model of information-seeking in which anticipation is boosted by this prediction error.

The model accounts for a wide range of previously unexplained data from monkeys and pigeons. It also successfully explains the behaviour of a group of human volunteers from whom Iigaya et al. elicited informational and actual decisions concerning uncertain and delayed rewards. The longer that the participants had to wait for possible rewards, the more avidly they wanted to find out about them. Further research is now needed to investigate the neural underpinnings of anticipation and its boosting by prediction errors.

James D. Brierley,  Mark A Ungless,  Subhojit Chakraborty … (2009)
Midbrain dopamine neurons play central roles in reward processing. It is widely assumed that all dopamine neurons encode the same information. Some evidence, however, suggests functional differences between subgroups of dopamine neurons, particularly with respect to processing nonrewarding, aversive stimuli. To directly test this possibility, we recorded from and juxtacellularly labeled individual ventral tegmental area (VTA) dopamine neurons in anesthetized rats so that we could link precise anatomical position and neurochemical identity with coding for noxious stimuli. Here, we show that dopamine neurons in the dorsal VTA are inhibited by noxious footshocks, consistent with their role in reward processing. In contrast, we find that dopamine neurons in the ventral VTA are phasically excited by footshocks. This observation can explain a number of previously confusing findings that suggested a role for dopamine in processing both rewarding and aversive events. Taken together, our results indicate that there are 2 functionally and anatomically distinct VTA dopamine systems.

Anticipation and the Valuation of Delayed Consumption

K Ericson,  David Laibson,  Jonathan D. Cohen … (2007)
Previous research, involving monetary rewards, found that limbic reward-related areas show greater activity when an intertemporal choice includes an immediate reward than when the options include only delayed rewards. In contrast, the lateral prefrontal and parietal cortex (areas commonly associated with deliberative cognitive processes, including future planning) respond to intertemporal choices in general but do not exhibit sensitivity to immediacy (McClure et al., 2004). The current experiments extend these findings to primary rewards (fruit juice or water) and time delays of minutes instead of weeks. Thirsty subjects choose between small volumes of drinks delivered at precise times during the experiment (e.g., 2 ml now vs 3 ml in 5 min). Consistent with previous findings, limbic activation was greater for choices between an immediate reward and a delayed reward than for choices between two delayed rewards, whereas the lateral prefrontal cortex and posterior parietal cortex responded similarly whether choices were between an immediate and a delayed reward or between two delayed rewards. Moreover, relative activation of the two sets of brain regions predicts actual choice behavior. A second experiment finds that when the delivery of all rewards is offset by 10 min (so that the earliest available juice reward in any choice is 10 min), no differential activity is observed in limbic reward-related areas for choices involving the earliest versus only more delayed rewards. We discuss implications of this finding for differences between primary and secondary rewards.

elife-xml-version 2.5
Author impact statement The anticipation of rewards turns out to have its own hedonic value, on top of that of the reward itself; a wide range of behavioral and neurophysiological data suggest that this anticipation is boosted by prediction errors.
Data availability:
ScienceOpen disciplines: Life sciences
Keywords: reward, anticipation, prediction error, decision-making, reinforcement-learning, human, other, rhesus macaque